Hi does anyone have experience with flying the Air 2 or Air 2S with Insta360 Sphere attached?
Thanks

A quick search shows @Nowtleft has.

Yes Ive got one. Works pretty well but because the two cameras are further apart the stitching isnt as good as the Insta x3. Noticable jello i the subject is to the sude of the camera. So you need to turn the through 90 degrees and fly sideways. Im waiting for decent weather to get more experience with it.
The drone flies ok, not as responsive and makes more noise as its working harder and obviously flight time is reduced.

The only thing you need to make sure is not to exceed the 570 gr take-off weight (MTOM).

The only thing you need to make sure is not to exceed the 570 gr take-off weight (MTOM).

not to exceed the 570 gr take-off weight

You’re going to have to enlighten us all I think

Hi, I’ve used the Sphere quite a bit and once you get used to the clumsy take off and landing it’s easy to fly the air2s. I haven’t had the stitching issues that others have had., the odd bug of ghosting but the footage more than makes up for it.
Downside is that when it comes to upgrade your air to S you can’t do because it’s the only drone that it fits on so unless you want to get rid of your spirit the same time it’s a tricky one. Having said that they are to us as a fabulous strong and I’m quite happy to keep it for the time being. It’s important to make sure you keep on top of charging the battery on the sphere it’s very easy to forget to do that one when you doing all the count as all the batteries that you’re charging for a day out. Overall I really enjoy using a sphere not gonna use it that much I said to use my Insta360 X3 which is absolutely brilliant. It’s probably advise anybody was looking at buying a sphere to get the X3 first because it’s much more useful on a day-to-day basis and tons of fun when you’re editing . any questions I’m happy to answer them if I can happy Christmas to everyone.

As an example, the M3 Enterprise shows 915g (with propellers, without accessories) and 1.05kg as the MTOM.

Essentially all I am saying the remote pilot is responsible for not exceeding the MTOM. My Air 2 weighs 570g without accessories. It is my opinion flying with the Insta360 Sphere in the UK would exceed the MTOM. In the unlikely event, something was to happen with this installed it would be in breach of the CAA regulations.

I am not attempting to be the police just stating what I learned in the A2 CofC course this month and was a question when I took my test for the license.

I’ve looked at this before and thought be fun especially when it comes to editing.

Why is it only for the air 2s?

Thanks. I do not have either at the moment but was interested in the concept. However, jello is a big turn-off. Thanks again for the review.

Thanks for the detailed info. Did you experience any jello effect on the Sphere? I have the Insta360 One RS 1 inch and found it excellent for action based applications. As you said, editing on the phone was fun. Happy Xmas to you too.

I’ve been asking that question too. Guess it’s for Insta360 to answer. I’m sure if Sphere proves to be popular, they’ll adapt it for other drone models but it does run up against CAA regulations as mentioned by @ReggieL though.

The Sphere has to fit tightly and the stitching algorithm is based on the air 2s dimensions. I think someone tried it on a mini 2 but it wasn’t easy or safe to fly.
It is great fun to edit for example you just fly once in a straight line and you can edit rolls, reverse, spins and almost anything else. Until your head gets around the concept it seems far fetched but it really is great fun. I’m not sure what Jello is but the editing fun and new ways of doing things will outweigh the negatives.

Apologies for the errors in the post. I can’t see how to edit them out.

The Jello effect is usually caused by the vibration of the camera mount caused by unbalanced props. This was quite common in the early days when we hard mounted (no gimbals) GoPros to the bottom of Phantoms but has thankfully disappeared nowadays.

Jello was perhaps the wrong term to use although it is the same effect. It’s only apparent where the stitching is on the Sphere so provided you have the drone in the right attitude it isn’t a problem.

for anyone interested in seeing a post edit 360 video this is one I did with the X3 in Blackpool. to film it I just walked in a straight line. 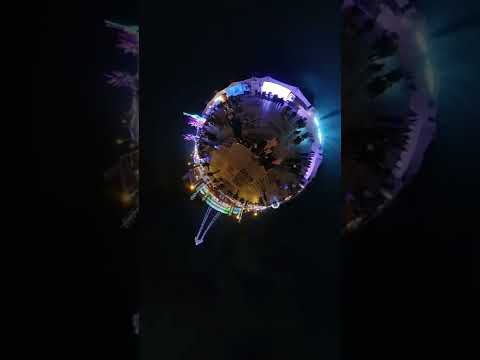 the editing is the fun bit and you are limited only by your imaginations limits.

If anyone’s interested I did the attached with a 360 camera on a 3m selfie stick. 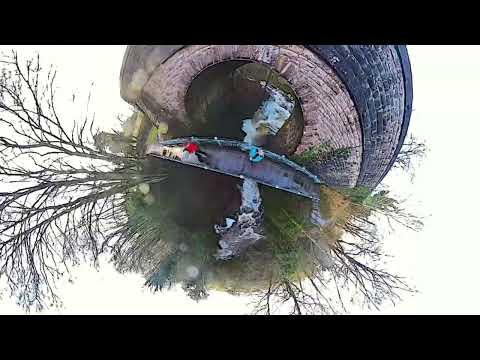 I’m putting it here as the sphere would edit in a similar way but obviously couldn’t be flown here. This setup allows drone like shots where it’s impossible to fly.
I stood on the bridge and moved the camera from vertically down, over my head to the other side vertically down.There are a hundred ways it could be edited and that’s the fun bit. You don’t need to spend ages setting up a shot in the cold👍🏻
I hope it’s ok to post none droned vids here but it is relevant.
Cheers. Rick