I recently purchased a new to a DJI F550 with Naza v2+ gps. It’s came with a zanmuze H32D gimbal which I have now attached a GoPro 3+ To do some FPV.

Once powered up the gimbal works but is pointing up to the sky. My TX is a Devo 10 but for the life of me can’t workout the gimbal pitch control or how to allocate/program channels using the Devo 10.

Any advise would be great.

And welcome to the group.

If you haven’t already done so you need to download the Naza V2 Assistant software. This will quickly allow you to see which channels of your receiver have been mapped to the Naza V2 controller. You will need a minimum of 7 channels to provide all functions.

Is the receiver connected to the flight controller by PWM (Separate connections for each channel) or S-Bus (single connection for all channels)?

I’m not currently at my PC but as I have the same craft, with the same FC and Gimbal, I should be able to walk you through the process with the aid of some screen shots.

Once you’ve downloaded the NazaM_V2 Assistant you need to go to this tab to ensure that the controls on your Devo10 map correctly to the controls shown. You just need to move the sticks, switches, and sliders/knobs, 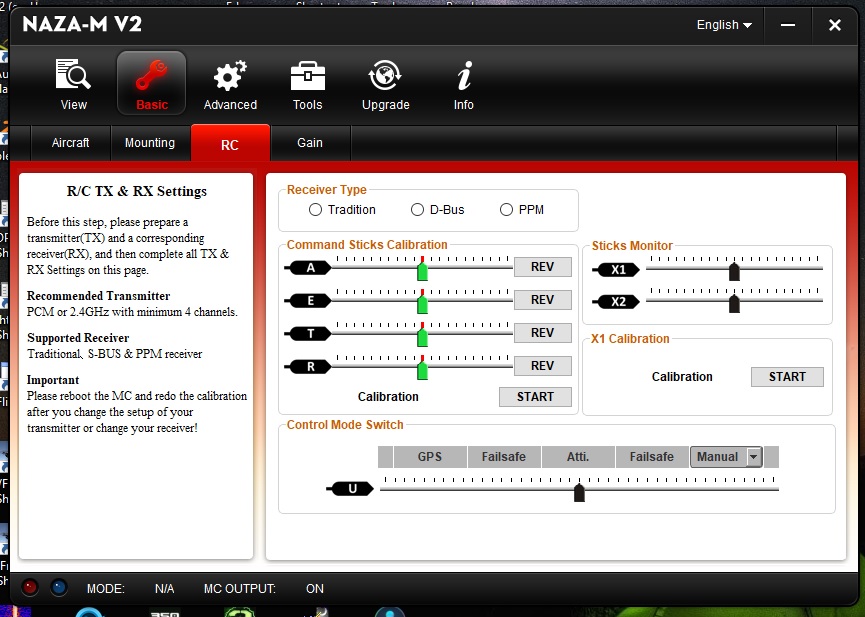 The command sticks are self explanatory, X1 corresponds to the Gimbal control and X2 is the IOC control (Course Lock. Home Lock) this one I usually disable as I never use this function other than to initiate a compass calibration.

The Gimbal function also needs to be enabled in this software. 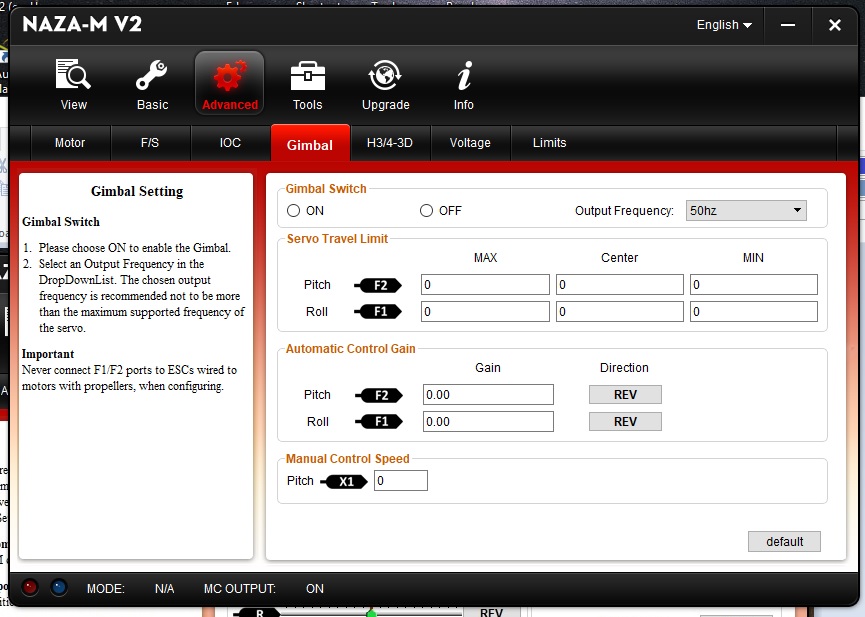 At the top is the option to switch the gimbal control on or off, set it to on.

F1 and F2 are the physical outputs from the Naza controller to the the Gimbal, as you can see F2 is used is used for Pitch but is only of any significance if using anything other than the Zenmuse as this has it’s own controller and is connected to the Naza Port Hub. But still you can set the default power on position, amount of travel, and speed of travel, from this TAB.

For adjustments specific to the Zenmuse H3-2D gimbal you need to access this TAB. 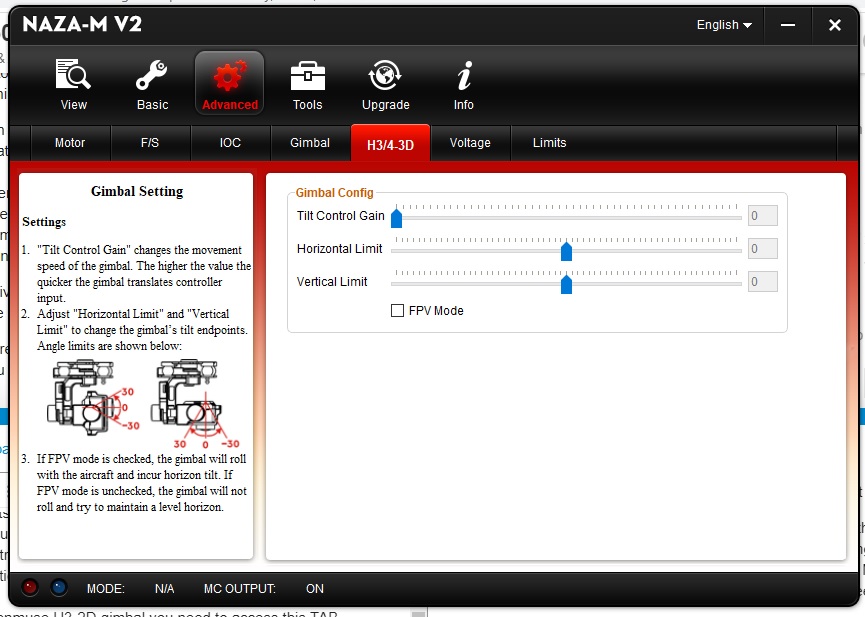 You probably will not need to adjust the gains but if you do the instructions are on the left panel.

If you have any other questions don’t hesitate to shout out. I’ve not used a Devo10 but the mixer options are probably not that much different from other digital radios.

Hello Nidge. Many thanks for the talk through. My x1 channel seems to do jack all… would downloading the Zenmuse program help? I run Mac OS and surprise surprise on windows in supported.

I’ve only ever used the Zenmuse software to update the gimbal’s firmware.

I’m not in a position to advise how you would go about configuring a MAC to support the Naza Assistant as I’ve no experience with Mac’s. There is a Naza utility for iOS, which I use on my iPad, but you will need either the DJI Bluetooth module or the DJI Datalink (which includes the module) to access the system.

From your description it sounds like nothing has been configured on the Devo10 to control the gimbal. The default channel for gimbal control on the Naza is Channel 5. You will need to setup one of the top mounted potentiometers on the Devo10 to output on CH5.

Do you know how the receiver is connected to the Naza? There are three different ways this can be done.

If your system is configured as PWM check that the CH5 output of the receiver is connected to the X2 input of the Naza. I would also confirm that the gimbal’s GCU (Gimbal Control Unit), which is a small black box wired to the F550’s battery supply, is connected to the PMU (Power Management Unit) or if fitted the CANBUS Hub.

I’ve not had any experience configuring a Devo10 but I have just downloaded the manual for it and I’ll have a read through to see how to assign a channel to a switch/pot. I use a Taranis X9D as my primary radio but I suspect the Devo10 works the same even if the menu system is different.

Hi, nice one, I will have to double check connection, I think it’s traditional it’s set on that in assist software and the drone flies… I keep my drone at my workshop so will be out there again on Monday. I will take a wee video so you can see the guts of the drone. The gimbal works, stabilises just can’t change move it.

I thank you for your assistance.

I hope to get a set of goggles at some point. That looks cool.

Here is a picture. 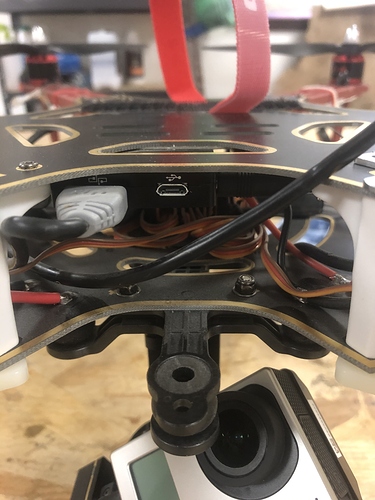 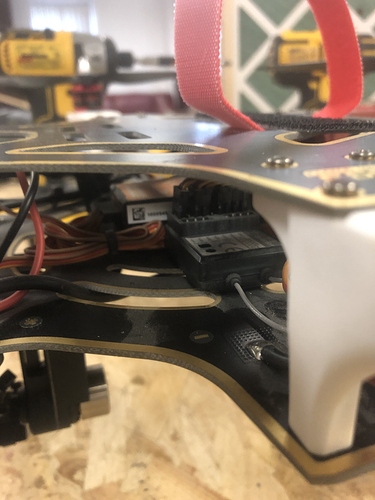 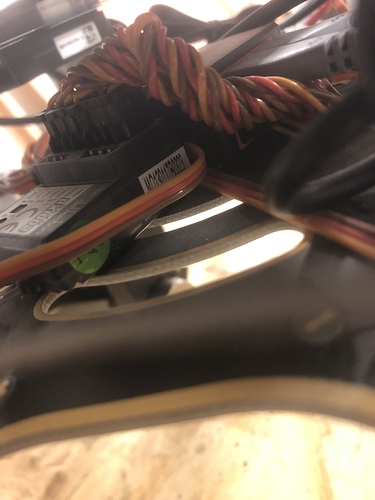