So my thermal camera was delivered yesterday, and my wife and cat got so pissed off with me following them around the house with it my wife has gone shopping for the day, and my cat prefers to sit outside in the rain.

So I thought I’d bore you lot on the forum with it.

This is a picture of the FPV Drone at ambient temperature. 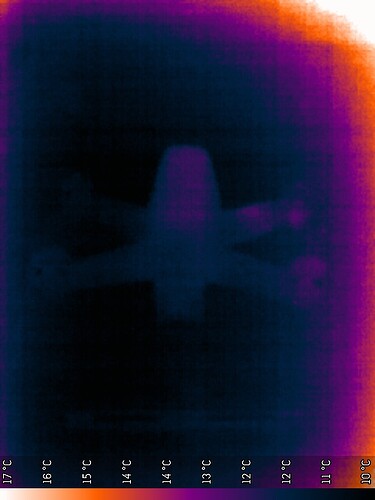 And this is it after being powered on for one minute. 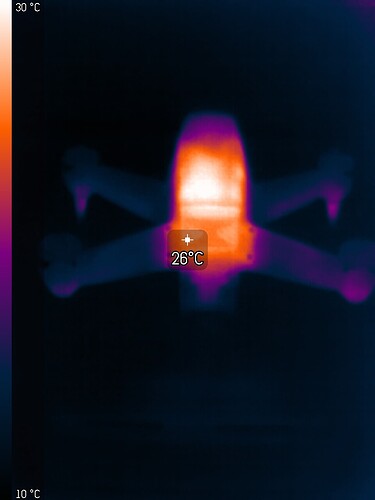 What I’ve found quite interesting is there appears to be heat generated by the PCB antennas in the front feet. 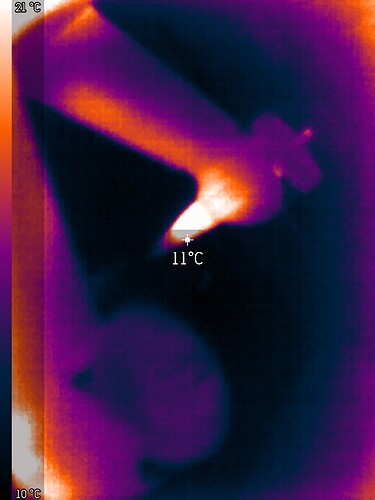 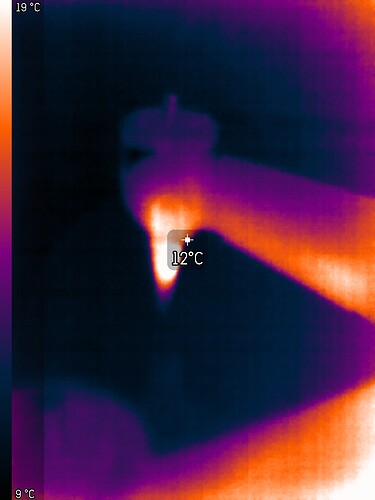 It’s still all new to me so I doubt I’ve got the camera settings at optimum yet.

which thermal imaging camera did you get?

ps: is that a result with the wife and cat leaving you alone for the day?

Love the camera and would also like to know which Model it is but the most important question is ………how did you manage to get the wife to leave you alone for the day?…….asking for a friend

I use a Seek Reveal handheld Thermal camera, similar to the one the fire brigade use; it is amazing how many hot and cold spots are in the house; it even shows the vein circulation in my legs, studs behind walls, and if you place your hand on a surface, reveal a thermal signature of the hand five minutes after. I took it to a deer sanctuary where many photographers were trying to take photos, but they could not see the deer; the sensor has a range of 500ft; I pointed it at some bushes and told them where the deer were. I was tempted to attach it to my drone, but It would need a slight conversion; it would be perfect for a search and rescue mission.

which thermal imaging camera did you get?

ps: is that a result with the wife and cat leaving you alone for the day?

The camera is the Android version of the Seek Compact Pro. The primary reason for the purchase is to aid in electronic repair, but doe to the relatively high resolution compared to similar priced Flir options it’s quite good outside and has a claimed resolving distance of 2000ft or so.

As for my wife leaving me on my own for the day… she got so fed up with me following her around the house with it the previous day she decided that shopping in the pouring rain was the better option.

I was tempted to attach it to my drone, but It would need a slight conversion; it would be perfect for a search and rescue mission.

I too would like thermal capabilities on a drone but currently the cost is a prohibitive for me. The cheapest option would be to get a CGO-ET camera for my Yuneec Typhoon H, but for a used one it’ll still be more than a grand even though the thermal part of the camera only has a 160x122 pixel resolution.

I am finding the abilities of thermal imaging fascinating. Like you I’ve done the hand print test. I’ve also traced my cat’s paw prints, ascertained which of my radiators could benefit from a good sludge flush, and quite worryingly found I may have circulation problems in my feet.

it’ll still be more than a grand even though the thermal part of the camera only has a 160x122 pixel resolution.

Both starting at £2k though

That said, it’s a decent price for a sensor which started life at north of £10 grand.

Ah, but then there’s all the hassle of getting an Inspire, and working batteries for said Inspire. And it’s one extra drone to move off the bed at nighttime and find a spot for it where I don’t trip over it in the middle of the night when I wake up needing the bathroom, which is becoming more frequent as I age.

With the increased potency of my medications that may require an “Only Fans” subscription as my creative flare becomes even more distorted/disturbing.

A perfect tool for our drones, surely the basic components of a thermal camera can’t be that hard; perhaps a DIY kit will be a cheaper option, and lighter than my handheld, hmmm, I think I will do a search.

DIY kit will be a cheaper option, and lighter than my handheld, 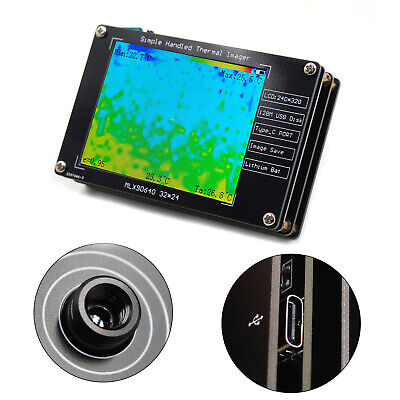 This is an arduino project 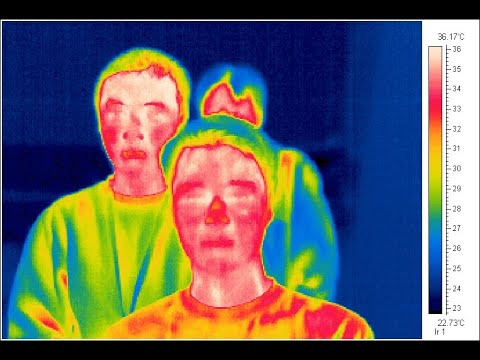 Has your cat forgiven you yet?

Has your cat forgiven you yet?

She was forced to, if she didn’t forgive me she wouldn’t get fed. 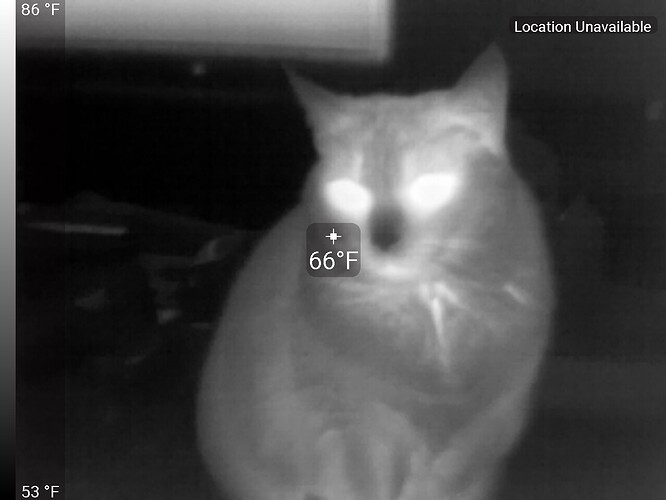