Hi all I fly a DJI Spark, the specs say that this drone ca fly up to 2 km (1.2 miles). Although I am not planing to fly that far, my Spark only reaches 280m (0.173 miles). Does any one have any tips on how to fix this please? I have read a few forums about this but I couldn’t see anything clear. Also I have checked the settings and there isn’t a distance limit.

Does any one have any tips on how to fix this please?

I think we’d first need to understand why the range is so poor, before we can fix it.

What happens when you get to max range? Picture loss? RC signal loss? Something else?

When the Spark was first released it was as a selfie drone to be flown from a mobile device. It wasn’t until later that DJI started including a controller. The max range claimed is usually based on the FCC specification where the RF power levels are considerably greater than those allowed in the EU/UK.

Range also has a lot to do with where you are flying. In a suburban environment your are sharing the spectrum with all kinds of domestic wireless devices, WiFi routers, security cameras, etc. Prior to editing the firmware in my Spark I could probably get to about 600m-700m in an area with no other RF devices and a clear view to the horizon. In my backyard I’ve had the Spark lose connection within 20feet due to interference from other wireless systems.

The difference between FCC and EU power levels.

Thank you for your replies.

The control is attached to the my IPhone with a cable. I fly where there are literary no houses at all in at least 1 mile radius, in the countryside.
After about 280m it says picture lost returning home and the drone starts coming back.

Is there anything between you and the drone? Trees, mainly in the countryside, but any other obstacles could reduce the reception. Have you tried on top of a hill with nothing between you too?

Also, how high are you flying?

No nothing, I have tried on a hill with only fields ahead. That’s is why i was surprised also the fact that the remote is wired to the phone. At the beginning I thought it was the antena positioning. But I have tried all the different positions. I have thought about buying a booster but I wanted to know if I was doing something wrong.

So that means I won’t be able to get much more out of it? Because we are in the uk? Not that I am planning to go, but what about if I go to USA, the range would be up to 2 km.
Also is this the same with DJI air, mini etc. Thank you again

If you check this video it would let you know the correct way to position the antennas. 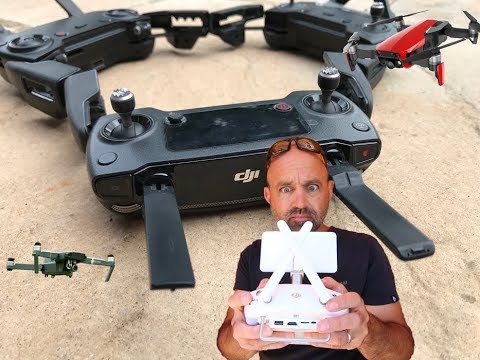 Check if you have it correctly. I used to use a Mavic air 1 and the controller looks very similar (if not the same) as the spark. I must say that I also felt cheered on how far it would go compared with what it was supposed to. There was some other things that I did to improve a little the range, like you mentioned, flying with out any obstacles and trying to find the highest point possible.
Also, the channels that I used was a big deal. Like the spark, the Mavic Air 1 has this channel setup that you can set it to auto or manual. With two frequencies. Please check this video where it explains the differences and when you should be using 2.4GHZ vs 5.8GHZ. Each has its benefits and their cons.

Apart from that, the other only thing I would ask you to check, is how far can you go without the controller. Can you check to connect directly from your mobile without the controler? This might give you longer or shorter range. Worth a try.

If you think about it the Spark was never intended to go long range. For one the battery capacity is a big limiting factor. There’s little justification in zooming out to the horizon if you don’t have enough battery life to get back.

Even though I modded my Spark I still only used it more as a camera on a flying tripod. It is still in essence a selfie drone but with the benefit of a controller. But if you want to eek as much out of it as you can here are some pointers.

While your mobile device is connected to your controller turn off WiFi. Even though you’re not connected to a network it will still be beaconing, and as your phone uses the same frequencies as the Spark there is the possibility it could swamp the controller. Also disable Bluetooth. The problem with WiFi drones is that WiFi is not dynamically frequency agile, unlike systems like Ocusync and those used by hobby RC systems that can change frequency on the fly if interference is detected.

Switch bands. The Spark can operate on 2.4GHz and 5.8GHz. Both frequencies have their benefits and their drawbacks. 5.8GHz allows for a larger bandwidth signal. The benefit of this is the received video will be better quality and there’ll be less latency. The drawback is 5.8GHz is limited to 25milliwatts and the effects of atmospheric / moisture absorption, or path loss, are greater. 2.4GHz offers a higher power limit, 60milliwatts to the antenna but as the antenna is a dipole with a theoretical gain of 2.5dBi this comes out as an Effective Isotropic Radiated Power (EIRP) of 100milliwatts. But as well as providing a stronger signal 2.4GHz has a greater penetration property than 5.8GHz and can thus travel farther.

Thank you for your tips

I tried with the cable and the wifi and Bluetooth off and it was the same then I change the Chanel following the video and it it went up to 450m. I only seem to have 5.8 GHZ on my app how can I change to 2.4 I have attached a couple of images. Thank you again image|690x318

I think you will find that you can scroll the channel graph left and right.

The 5.8GHz channels run from CH32 to CH165, with some significant gaps.

On a side note. DJI upset many European Spark/Android users a few years back due to a firmware upgrade that disabled USB tethering to the controller. This meant that the only way to connect to the controller was by WiFi. To add insult to injury the only WiFi connection was on 2.4GHz because the DJI only enabled the FCC 5.8GHz channels and the majority of EU Android devices were blocked from accessing these channels. This went on for quite sometime as DJI claimed they never intended to permit USB tethering and it was initially an oversight. Some people were able to employ a workaround but DJI responded to this saying it would invalidate the warranty. Eventually, after about a year, DJI succumbed to reason and reinstated USB tethering.

It looks like there’s been a few changes to the APP since I last used my Spark.

I’ve just fired everything up to check that everything I said above was actually true and… I need to revise a few basic principles.

For reference this is the screen grap from my Android Phone (Huawei P30).

As you can see my Channel Activity graph above covers the available 2.4GHz channels, in my case 1 through 11 as I’m in FCC mode.

Below this is the channel selection, 2.4GHz, 1 through 11, and the five 5.8GHz channels (149, 153, 157, 161, and 165). My Spark to controller link is currently on Ch153 as indicated in Blue.
I think as DJI is as DJI does is they’ve failed to enable 5.8GHz on the activity graph for this version of the APP as there should be a big blue line for channel 153 indicating the assignment of my controller.

I’ll see if I have another Android device lying around running an older version just to confirm this later.

This is confirmation that if you task DJI to do something with Android they just F#&k it up every time.

Below is a screenshot from my iPad. As you can see on the channel activity graph we have both 2.4GHz and 5.8GHz activity options showing. I will admit this is quite an old version of DJIGO4 so I can’t confirm or deny they screwed up the most recent iOS version in the same way. 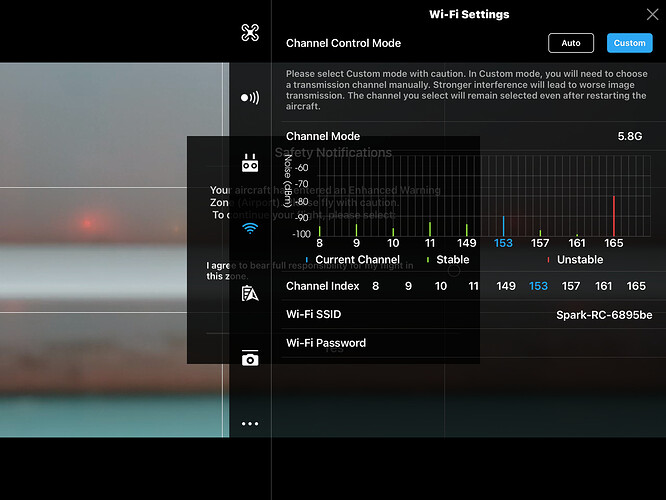 Thanks Nidge for this useful information. I use an IPhone hooked to the RC with a cable. I have actually disable Bluetooth and wifi and it went further (425 m)
I haven’t tried with the 2.4 but thanks to you I know how to do it now. I think around 500 m is a distance I feel confesable with. I wanted to see how far it went (always following the rules) because I though 2km as DJI claims was BS.
Thank you for your input

No problem. Always glad to try and help.