A dedicated thread in which to discuss any items of the AirData UAV - Drone and Battery Maintenance Schedule Guide.

We’re hoping this timely partnership with Airdata UAV will give you all something to do during lock down.

That is an excellent clarification of a vital issue. Congrats to the committee on achieving such a positive relationship with AirData.

The relationships we have with some of our partners take a serious amount of time to build.

We just hope it helps our members

And with that said…

I have been waiting for such knowledgeable info - I will most certainly begin the regime suggested with immediate effect given the weather and extra time I have available.

I regularly do the maintenance schedules, based on AirData, but will certainly be reading these guides.
Thanks for all the hard work you put in to achieve these deals for us

Is it ok to cut and paste the guides into a word or pdf file and print them out for personal use or sharing on here?

Hi, as previous post I’ve been using the facility in Airdata UAV as I’m a gold member.
As of today I’m all up to date with my equipment… 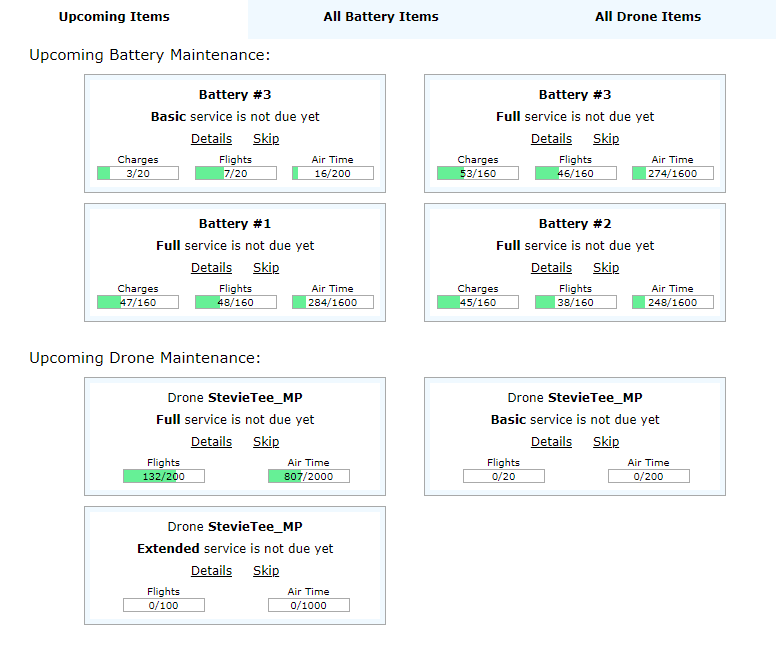 @PingSpike Rich, Does this count as an answer to your question ?

I was hoping someone had used the guide we published to perform a full drone service, even if not needed, during our current lockdown situation

During these trying times when we can’t get out flying I guess it’s really important to stay on top of our battery maintenance regime.

I understand that a good idea is to charge them up fully and then discharge them down to 50/60 %.

I know you can make the bird hover and use the battery that way or perhaps use the accessory DJI provides with the extra batteries to use as a power bank.

I’m a little apprehensive about the last method as I wonder if the battery could be put under undue load.

I’m wondering therefore if anyone can recommend a decent charger/discharger that can be used with the M2P and I2 batteries…I guess with supplied leads to fit each type.

The only other thought I had was to have the batteries self discharge and adjust the time down to 3 days.

Any thoughts would be very appreciated.

The built in discharger is all you need.
Set the number of days to the lowest possible number and forget about it,
It’s one of those built in tools that really works

I was hoping someone had used the guide we published to perform a full drone service, even if not needed, during our current lockdown situation

Has anyone been able to take advantage of the drone service guides during lockdown?

Hi, as previous post I’ve been using the facility in Airdata UAV as I’m a gold member. As of today I’m all up to date with my equipment… [image] @PingSpike Rich, Does this count as an answer to your question ? Cheers Steve

I would NOT recommend doing this.

LiPo batteries are rated with a nominal voltage and the maximum current (C rating) that can be delivered at that voltage safely, this provides a value in Watts (Voltage X Current (V X I)).

When a LiPo battery is at 10% of total capacity it’s safe to say that the voltage for that pack is significantly lower than its nominal value. However the power value required by the drone to remain airborne has not changed so something in the power equation has to change, namely the current value has to significantly increase. This increase in current leads to an increase in the battery’s temperature (heat is directly proportional to the current flowing through a resistive load), and in turn this causes an increase in the gassing effect, which as well as causing the pack to swell contributes to a higher and irreversible internal resistance, shortening the life and usability of the battery.

Ridge, that IS one sound explanation !!! Hats off to ya. VERY helpful and no ambiguity.

Thank you, Ted. I sometimes have these moments of clarity… Sometimes