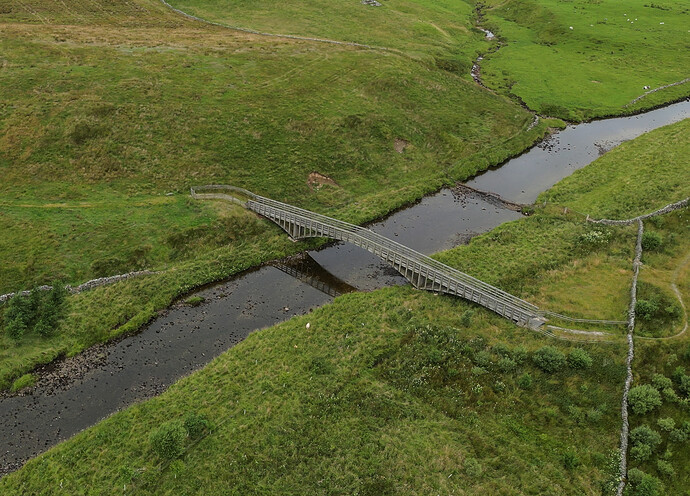 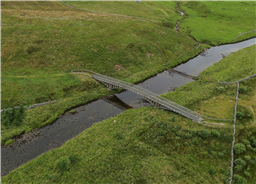 This location has been recommended to fly your drone in the Bridges category in the Yorkshire and the Humber region.

A new bridge was required at Far Moor Nr Horton in Ribblesdale to carry pedestrians, cyclists and horse riders over the River Ribble on the 350 mile Pennine Bridleway National Trail.

Measuring 53x2.5m, the Far Moor bridleway bridge is the largest example of a stress laminated construction in the world.

The beautiful, but extremely remote rural setting influenced the choice of bridge type. Access for heavy machinery or cranes to the site was not possible so it was agreed the bridge should be made using stress laminated construction.

It was essential that the bridge was sympathetic to the surrounding environment.
The bridge was constructed in 8 weeks weeks, inspite of the remote location. The large spans were formed from short lengths of timber that were carried by hand and lifted into position.

The all timber construction blends in well with the natural surroundings and because the structure used only small timber pieces they were sourced by the Forestry Commission from forests within the United Kingdom.

The originator declared that this location was not inside a Flight Restriction Zone at the time of being flown on 23/07/2022. It remains the responsibility of any pilot to check for any changes before flying at the same location.