So Christmas was kind and I now have a Mini 2 but I’ve found myself stuck between the National Trust/ Peak Park /Peak District and Sheffield council. Peak district (https://www.peakdistrict.gov.uk/visiting/frequently-asked-questions/drones) says no drone flying, especially over SSSI which I found covers much of my local area (Bradfield Parish) and Sheffield Council who say no flying models from land they manage (https://www.sheffield.gov.uk/parksandgreenspaces). This appears to put places out of bounds, like Alport Castles, Stannage, Burbage, the Dark Peak Moors my favourite cycling tracks and even my local park where I was hoping to familiarise myself with the controls. There are green lanes open to motorcycles and 4x4s that are closed to drone fliers because of the “environmental impact” of flying a 250g drone. I understand not flying during bird nesting season but it

Are there any fliers on here from the west side of Sheffield / Peaks area who have found places where they have permission to launch that’s in VLOS of things worth photographing? I did find a website that looked like it would put you in touch with land owners but they wanted £25 per search!

The peak park page says “no flying over or flying from” SSSIs which i can understand if its in nesting season for rare birds but if its an sssi because of ancient groundworks there then its not an issue if you apply common sense , but you still have to work out why its a sssi. This is backed up by this page too : https://dronesaferegister.org.uk/blog/im-a-hobby-drone-pilot-where-can-i-fly-my-drone/#:~:text=You’ll%20need%20a%20permission,without%20consent%20from%20Natural%20England.

This resource helps find the name of the SSSI but not the reason for its classification :Sites of Special Scientific Interest Units (England)

That site may be great to find scenic locations but for the places near to me that were on my list of places to fly that are also on this map every one of them is in an SSSI (see here : Sites of Special Scientific Interest Units (England)) and it doesn’t detail any permissions, giving the impression that it wasn’t sought. The descriptions are also not that accurate detailing one place as Edale when Edale is about 30 minutes drive away…

As Derbyshire is in Tier 4 with ‘no unnecessary travel’ looking to fly there and coming from a tier 3 area, is obviously purely an academic exercise at the moment…

Let us know if any descriptions or locations that are wrong and we can look into and edit.

I think you are overthinking this.

Why not just go out and fly where where you want, as long as it’s not in restricted airspace they cannot stop you , imagine yourself as a hot air balloon

Or class it as work, B roll filming. Travel for work is allowed

It is a crime to disturb wildlife in a SSSI, but so far as I can tell that’s it. It’s the landowner who needs permission from NE to undertake works in a SSSI, not an ordinary visitor.

And the National Park authority only set the rules for the land they actually own, which is far from all of it. If you’re concerned, maybe list a few locations to them and ask them to confirm whether they own the land there or not.

'tis but a joke

For info here is a list of the land that the Peak District National Park actually own.
What is so annoying is that allow hang gliders to take off from Stanage Edge but go nuts if they see a drone up there.

Has anyone in here had any bother in the Peaks?

Genuinely interested. With it being a such a vast area it seems like the most you’ll get is the member of the public confronting you. The Peak District National Park tell people to report to the police but unless it’s serious surely they don’t bother doing an awful lot, especially as you won’t be around to find. Unless said member of the public wrestles you down

I’ve flown several places in the Peak District and not had a single issue.

I often fly there, never had any problems, just one guy saying to his girlfriend he wished he’d got a gun. She looked embarrassed. I tend to get there early before it gets too busy.

Hi, now the weathers improving i’m getting to grips with where you can fly in this area. You would have thought it’s a vast area where you might get some freedom, but unfortunately someone owns every inch of this area/country, and most of them don’t like anyone but themselves to be on it

I flew at Stanage for 3 days until the farmer told me I can’t fly there because of ground nesting birds, so I looked into it more and it’s an SSSI, this map is useful for finding out about that - MAGIC 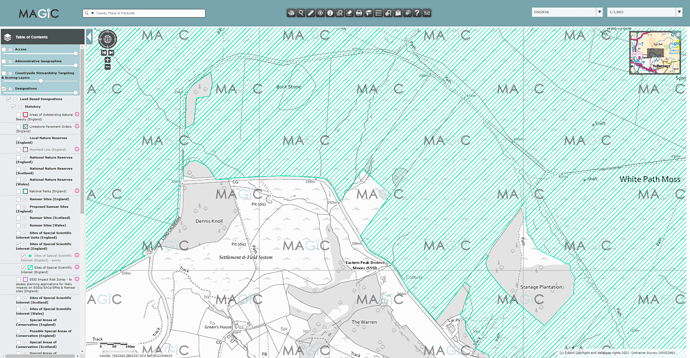 So it shows the SSSI extends down from the edge to the road, so I was actually outside that area taking off/landing, but probably on some other private land I imagine. It’s interesting that the day before I watched the farmer drive sheep across the entire SSSI area north of the road using dogs, but sure, a <250g drone 120m up disturbs the wildlife.

So I tried Castleton next, most of the Hope valley east of Winnats appeared to be free of SSSI’s, all other maps I checked seemed free of restrictions, so I filmed the Peveril castle. When I watched the footage back there was a very angry appearing woman shaking her fist at the sky, making throat-cut gestures and pointing me away like she didn’t want drones flying there. I’m assuming she was some kind of caretaker patrolling the grounds in case…I don’t know, someone had occupied the castle? I’m also assuming she was a woman, since I was at least 50m away. Given that the castle is currently closed so there was literally nobody there except her, and I didn’t take off from English Heritage land I don’t see I did anything wrong so I’ll probably go back.

She sounds like a delightful woman to encounter.
Such a shame you couldn’t have zoomed in and got a picture

It’s not illegal to fly over a SSSI (ask the airlines, they do it all the time!), but it is illegal to disturb protected wildlife there.

I flew over the Peak District recently, there were signs about not disturbing ground nesting birds. I’m pretty sure the dog walkers were a bigger threat than my drone.

Yeah, I think if you’re being responsible and flying high I can’t really see an issue with it tbh, but given this is the first year of the new rules with a large amount of freedom for mini drones, it’s probably best to not be a dick about it and just fly somewhere else until people are a bit more used to the sight of drones in the countryside.

I did try to tell the farmer I was only at altitude, but he was shouting at me from some distance away so it was a bit difficult to discuss, and I doubt I would have changed his mind anyway. I don’t know how he even spotted me or the drone tbh, just a heads up if you do want to fly around there. I’m sure the edge will be full of people trying out their christmas presents come the summer anyway though.