Hello fellow pilots, has anybody tried FPV flying ? and anybody used MagiMask ? have seen this on YT and am keen to try FPV looks awesome.

Lots of ‘proper’ FPV flyers about.

Not seen the goggles you mention, but @ianinlondon did a video and liked the DorneMask ones 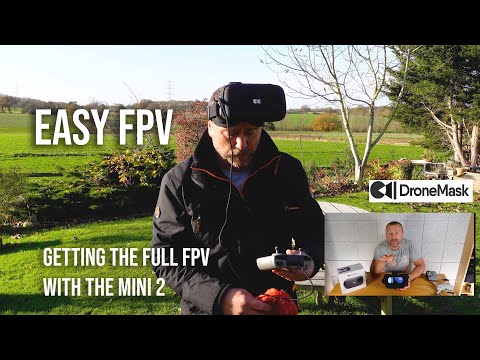 Hi Chris, DroneMask was originally known as MagiMask, same product but they just changed the name. Found there site, will probably give it a go !

Surely FPV (FIRST PERSON VIEW) applies to any drone with a camera, where you can see (via some form of screen) what the camera on the drone can see. So doesn’t FPV apply to every drone with a camera, from the cheap and nasty ones on Amazon, to the budget busting super heavy drones, most can only dream of owning.

FPV was part of computer games decades before drones became a thing, except maybe in the military and all we had back then were computer monitors and the majority of them were first person shooters, where you could see what the character could see, along with whatever weapon they may be carrying and perhaps the hands and lower arms.

So far as I am concerned, anyone flying a drone of any kind, that has a camera and transmits a signal to a controller or screen, so the pilot can see what the camera on the drone can see, is an FPV pilot.

The only difference between so called FPV pilots and the rest of us, is they wear a headset, that the drone they fly, transmits a signal too… Any suggestions for a new name/acronym to replace the incorrect one (at least to me) that they currently use… example AVLOS (Assisted Visual Line of Sight) pilots

True. A monitor is considered fpv.

The only difference between so called FPV pilots and the rest of us, is they wear a headset, that the drone they fly, transmits a signal too

But you have a lot to learn

For sure this FPV thing is certainly not as easy as it looks. I’m just saying FPV is the wrong acronym.

This FPV is more of a sport, compare to your average camera drone, which is more for use by those that just want to make videos as a pastime or commercially… Won’t see the average camera drone, apart from maybe the FPV and the new Avata ???, racing about in the sky, speeding through narrow gaps and doing flips and rolls and competing in races.

Would love to have the skills to fly a drone like those guys, but since I had to sell my Mini 2 recently and have no idea if I’ll ever get the money together to get a new one (would love the Mini 3) my days of being any kind of drone pilot are done, at least for the foreseeable future… and since I’ll be 62 in December, by the time I do get the funds together, I’ll probably be wearing milk bottle bottom glasses and VLOS, will be around 10 metres

With racing/freestyle quads, the View being transmitted and received is definitely from the First Person perspective, and is also the view which is being used to pilot the craft. Your main beef seems to be that camera drones are not commonly referred to as FPV, even though there is also First Person View available to them.

The fact is, most people flying camera drones are probably flying VLOS, which is actually Third Person View, so even though an FPV is available on the controller or attached device, that’s not (shouldn’t be

) the main method of piloting, so to refer to them as FPV would be even more wrong, even if they are, a bit. Fortunately no-one does, so it’s all fine, and we don’t really need any new names because we all generally know what we’re talking about through an agreed, common language.

Frustratingly, there are many things in this world that end up being named inaccurately simply through common use, but just because other drones, and even other forms of entertainment, use a first person view doesn’t mean that using the acronym to refer to a specific subset of drones is necessarily wrong.

The hobby/sport has evolved to a point where most people involved with it know the difference between a camera drone (even though it broadcasts an FPV image) and an FPV quad (even though it patently has a camera), so to try changing it now would be a fool’s errand.

Sorry you’ve ended up droneless. I hope you manage to get back to it someday.

FPV ? My main problem is seeing the phone screen in bright outside daylight ? I have made a temp sun screen, but am considering a headset that would eliminate this problem. From what I’ve seen on YT the headset option looks good. As for FPV question ? yes I suppose we all fly FPV anyway ?