Help! Was flying the old inspire (still my fave drone to fly) with zenmuse XT thermal on it counting wildlife tonight when suddenly the camera goes nuts and I get a gimble motor overload error on screen.

See video. Anybody had similar or have any clues?

I have had similar on the inspire with the X3 camera on.

From what I could work out myself. The overload warning causes the gimble to switch off witch would explain the camera motion.

Mine stopped working thereafter.
The only fault I could find on mine was the ribbon wire inside the gimble mount had been crimped at some point possibly at manufacturing phase and hadn’t effected performance until this point.

So I was out on the beach today withy 2 boys and the drone, a little windy but not too bad (around 9-10 knots) the drone was flying happily until i received an error message stating that there was magnetic field interference, the drone then went into ATTI mode and began to drift quite quickly on the wind and the only control I could use was to lower the aircraft until it hit the sand, I could not stop the roters from spinning once on the ground and it was trying to lift again it eventually flipp…

See images on this thread, I put it back together expecting to have to source a replacement ribbon and (touch wood) I have not had a problem since.

Turns out after some investigation, that my inspire is running an x5 gimble! But the rubber grommets are looking a bit deformed so maybe need replacing.

So you have the inspire 1 v2.0, do you have prop twist locks instead of threaded screw on ones ?

I’ve got an inspire 1 v1.0 with normal gimble (I see if I get same behaviour on that tonight) and then I bought a zenmuse XT camera which came with another inspire 1, the latter has twist props and an x5 gimble this is the one giving me trouble.

I know I know!

But I use it often! Until DJI release a next gen thermal platform I’m holding onto it.

The XT2 was the same sensor dressed up and the matrice didn’t wow me enough for the price!

The inspire still flies a beauty on a T48 battery!

I keep looking at the Dual camera for the Autel Evo 2 as it uses a FLIR Boson sensor at 640 res, same as the XT. It blows the Mavic 2 Enterprise Dual out of the water with its 160x resolution.

The lepton just isn’t up to it.

The boson picks things up from kilometres away!

I’ll have a look at the autel.

Tbf though. Inspire 1 with XT is really very good.

Tbf though. Inspire 1 with XT is really very good.

Yeah, I know… which is why I want first refusal on that camera of yours.

The boson picks things up from kilometres away!

This realtime “picture over picture” mode is pretty cool too: 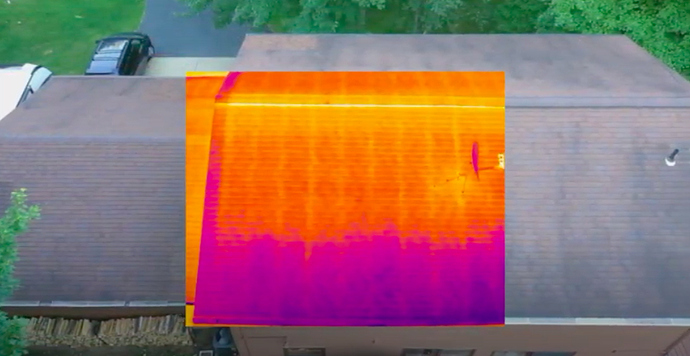