Anyone else use one?
I bought one yonks ago but I haven’t really used it much as I don’t like editing. I have been in hotels a lot through work recently and spending some time on learning more. I have found the pen tablet to be a massive improvement. I bought a pretty cheap XP-PEN model with 8 customiseble buttons. I only have 5 set up so far, zoom in, zoom out, open photoshop, right click and ALT. For anyone that edits a lot I would really recommend giving one a try. I like it so much I’m even using it as a mouse for the normal computer stuff.

I use a Microsoft Surface Go2 for mobile stuff, although it doesn’t have the grunt for video or photo editing.

I use the pen I got for it all the time, both as a pointer (trackpad replacement) and for taking notes on the screen in OneNote. Once you get used to the difference to real paper, it does make things a lot easier.

sorry I didn’t meant an actual tablet with a screen, more like a mouse mat thing with a pen, I’ll find a link

A graphics tablet Compatible with Android devices designed entirely around your passion, The XP-Pen Star G640S is prepared and ready for you. A drawing tablet mobile with a simply natural pen experience.

I did use one before, but I struggled with it with not seeing the lines appear where I was drawing. Was probably my fault at the time as I had a cheap and nasty one and I didn’t persevere very long with it. Not sure I have any workflows that would really use one now.

I use one for all of my editing but especially love it for image editing. It takes a bit of getting used to but after I’d used it for a while I found I was far more accurate with it as apposed to a mouse (especially for cloning / spot removal / selection based tasks)

I use the Wacom Intuos Pro Large when I’m at home and then I’ve also got a small version in my laptop bag for when I’m away from the house and using my laptop.

I wouldn’t be without them now

Graphic tablet is the normal name for them. I used to use a Wacom Intuos for work as a graphic designer, and had a small one at home which I didn’t use much. These days for editing photos, I find a gaming mouse more useful. If I want to draw carefully for a custom mask in Lightroom Classic say, I can switch it to a lower DPI setting for a slower, more controlled response. I have three DPI settings that cycle through on a button. The other programmable buttons are useful for things like Home and End for general use.

Some time later I picked up a cheap Trust one, which worked well enough but, as Bruce says, unless you’re using tools that make use of the pressure sensitivity, you can generally do most things equally well with a mouse, especially if you can switch DPI on the fly.

In the end, my desk real estate is too limited to have a big chunk of it taken up with a tool I rarely use.

I was not even thinking of a graphic tablet until seen this post, I don’t need it but but I do like keeping my postal service busy so i would buy one for my phone and great no battery’s.

The one in the link above does have sensitivity controls, although I’ve not played with them yet.
I’m only dabbling in PS, in fact I’m only just starting to learn layers properly for localised adjustments. It’s a lot to learn, alongside learning to use the tablet, but I’m finding it much more intuitive than I thought I would. I paid full price for mine a year ago and I would do so again

Checked on Amazon did not see £25 so clicked your link again @mynameisjoe and £26.09

I actually more I look at it the more I feel it never turn up, it advertised yesterday at 2 different prices but could not locate the £26.99 price but today same page it’s £26.09 not £26.99 as advertised , it says I ordered at 17:14 pm today which is incorrect, I would have expected to pay for delivery on a low price item. Inconsistencies but we see 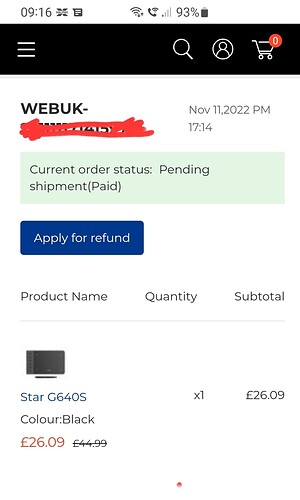 This is the link I used.

Yes the X pen blurb is somewhat fishy. On Amazon they have a video saying it can be used on a Chromebook and this is repeated on the X pen site yet in Amazon questions the seller insists
it cannot be used on Chromebook. We will see, at least it’s easy to send back with Amazon.

Dam, much faster as I had a email saying Your item will be processed within 7 days during which we’ll send you an order tracking number

Wow take all back arrived today.

For what I paid it’s worth it as I’ve had a play with it and very responsive and on point on selecting tabs.

Only cripe is the connection to my phone it disconnects at slightest movement. 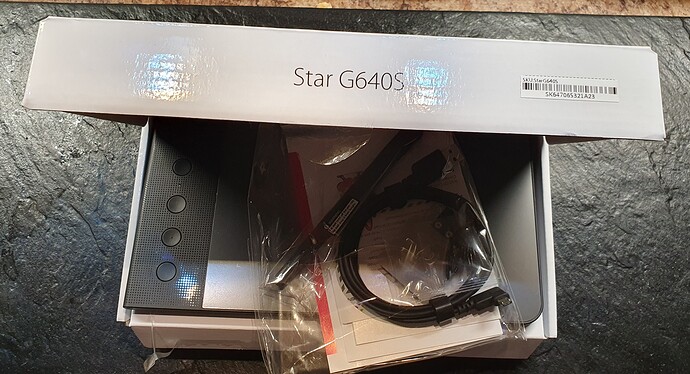 Me too, used it for years in PS but eventually went back to using a mouse.