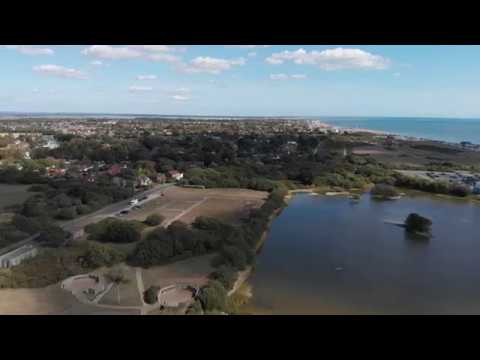 The pin shows one parking area with a 6 foot height restriction. Park on the verge if you have a high vehicle. The area is popular with dog walkers and the lake is leased by an angling club so be courteous to other users.

This is one of the items on the Hayling Island WW2 trail and was one of the defences of nearby Portsmouth. It was maintained as an anti-aircraft site into the Cold War area. The barrack buildings were demolished leaving a flat area including the parade ground, two magazines are still standing. Two of the gun emplacements have been “sanitised” but a third (behind the wire shutting off the lake) is much as it was left when the army withdrew from the site in the 1950s.

The originator declared that this location was not in a flight restriction zone at the time of being flown. It remains the responsibility of any pilot to check for any changes before flying the same location.

Thanks for the Pano too