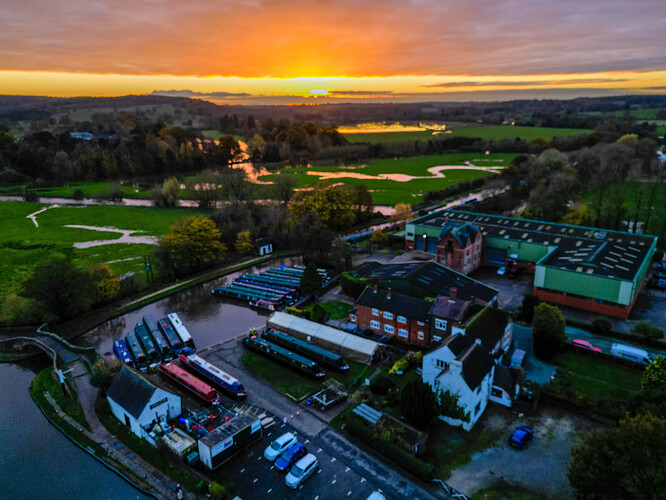 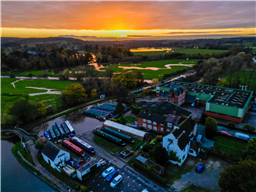 This location has been recommended to fly your drone in the Rivers and Canals category in the West Midlands region.

Haywood Junction, photo taken with Mini 3 Pro (my 1st picture with it!).

At Great Haywood, the Trent and Mersey Canal heads north, as it continues its ascent from Derwent Mouth towards its short summit near Stoke on Trent. Haywood Lock is just to the south, while Hoo Mill Lock is a little further to the north. The River Trent runs to the west of the canal, much too small at this point to support navigation. Derwent Mouth, where the canal joins the river, is 39 miles (63 km) from the junction, while Etruria Lock, where the summit level begins, is 18.9 miles (30.4 km) away.

The Staffordshire and Worcestershire Canal heads west from the junction. The Trent and Mersey towpath is carried over it by a bridge, and almost immediately, it crosses the River Trent on an aqueduct. It follows the valley of the River Sow, which joins the Trent below the junction, and soon reaches Tixall Wide, a broad expanse of water, which, although it looks like a lake, is deep enough to allow boats to reach its edges.

There are plenty of attractions nearby including Shugborough Park and Hall, which are now owned by the National Trust, and are located to the south, with Tixall Gatehouse to the north. The canal ascends through Tixall Lock, after which is crossed the Sow on another aqueduct. Tixall Lock is 1.3 miles (2.1 km) from the junction.

Shugborough Hall was begun in 1695, was extended in the 1760s, and some remodelling was carried out at the end of the eighteenth century by Samuel Wyatt. Internally, the plasterwork is magnificent, and the building is grade I listed. Many of the structures within the grounds are also listed. Tixall Lodge is a small octagonal-shaped building with a stone dome, which bears the date 1807. It is grade II listed, as is the roving bridge at the junction. Just to the south of Haywood Lock, a bridge carries a footpath from Great Haywood to Shugborough Hall. The path crosses the Trent at Essex Bridge, a grade I listed structure with fourteen arches, which is only 4 feet (1.2 m) wide. It was probably built in the 1500s, and is virtually unaltered. [source: wikipedia].

There is plenty of parking across the road from the junction in the Canalside Cafe & Farm shop (also featured in drone scene) during weekdays but it does get pretty busy at weekends but I've always managed to park there. They do a great breakfast as well as the normal cafe menu - all excellent!

The originator declared that this location was not inside a Flight Restriction Zone at the time of being flown on 22/11/2022. It remains the responsibility of any pilot to check for any changes before flying at the same location.