How should you take photos for mapping? and what's the best way to stitch?

Cleaver, but I want to be able to print it

I wonder if there’s a step by step on YouTube

Litchi! Not free though, but very cheap and worth every penny.

Litchi! Not free though

Not available yet for the Mini 3 and the same for

If you’re wanting to do mapping

As the sdk hasn’t been realised, probably next year

I should have spotted the mini 3 part!

If you’re having trouble lining up the images have you tried switching the gridlines on? Overlap all the images by a third and microsoft ICE should be able to stitch them together. I normally use ptgui to stictch (not free) but I had some panos that it really struggled with. I decided to give ICE a go before having to add the manual control points. It managed on the problem panos no problem.

I know there’s been a discussion on here about this. I did a quick search but it didn’t instantly leap under my nose.

I did find this, though, from only a few days ago.

DJI Mavic 3 and Mini 3 Pro - What mapping software/app do people use for mapping? Questions & Answers

There’s some software mentioned, and it also reiterates that Litchi isn’t available on the Mini 3 yet, but that doesn’t mean you couldn’t take the pictures manually I suppose.

Do you want panoramas (like the one above) or orthophotos (like the one below, that one has been downscaled the original image is 14,000 x 13,000 pixels, each pixel being 2 cm)? 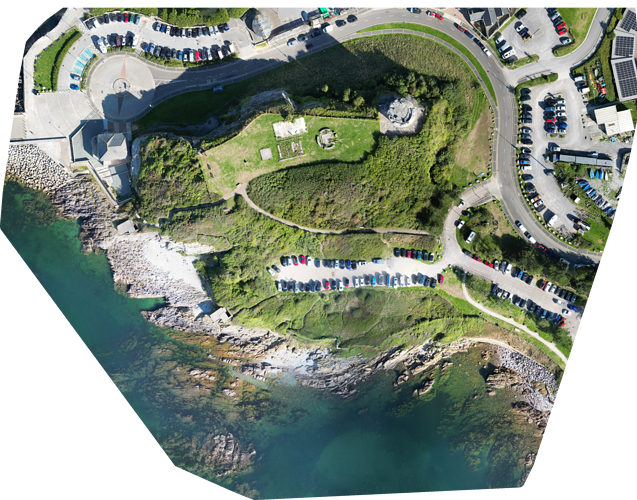 For panoramas, use the inbuilt mode but turn on save original images so you can choose to make the pano in photoshop instead.

For orthophotos, fly a regular survey grid then I’d recommend WebODM to make the orthophoto (will also do 3d reconstructions), takes a chunk of computer power and has a bit of a learning curve but produces good results, you can turn off all the 3d stuff and just output an orthophoto if you want to save some time.

WebODM is free (non commerical) if you compile it (dead easy on Linux, a bit harder on Windows) or about £45 for an installer, a relatively easy shortcut is to run it on AWS which on a spot instance will cost you £2-3 per dataset if you dont have a PC to run it on. I own an installer, but have recently switched to having an extra SSD in my PC running linux which I can compile it on a lot easier.

As you can see in my example, you will get some artifacts if there are moving subjects, just to be aware of. 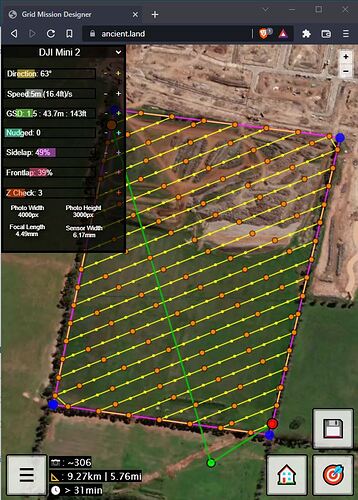 My tool is available in beta to explore at https://ancient.land I created a post at Grid Waypoint Tool It works in the browser and the UI should be suitable for most modern day mobile devices. Currently there’s some display issues for some desktop...

Take a look at this thread that merges 700 “straight down” images into one high-res image.

There are some other threads re Orthomosaic renders, that will probably provide useful info. Search.

But, from your post, that seems to be what you are wanting to do … even if not for as many as 700 images.

If only the Mini 3 could use litchi!

takes a chunk of computer power

<3h for well optimised 42MP GPS tagged images using matcher neighbours (Ryzen 3900x, 32GB ram, RTX2070S) can be much faster (1h) if the images are small enough to fit in the GPU vram

There are some benchmarks on Webodm here 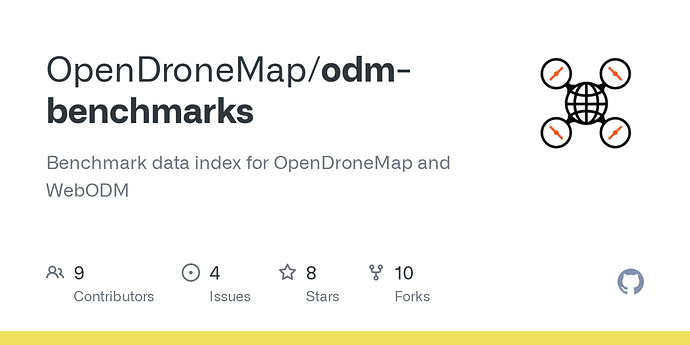 Benchmark data index for OpenDroneMap and WebODM. Contribute to OpenDroneMap/odm-benchmarks development by creating an account on GitHub.

Thanks. Just tried installing with the shell script on Windows. Unfortunately it’s very buggy so might have to spin up a Linux VM to get it working. Pretty cheeky to charge for a proper installer…

Price for convinience, the code is open source so you can compile your own windows binary if you want to. I paid for it, was worth it for me even though I run a lot of my processing on a Linux cluster now (which is a very easy install in docker)

The basic self install for windows needs docker, which is a VM in its own right, make sure that’s all set up correctly if you’re having issues, no point running a VM in a VM

Yeah I know it’s just the shell script they want you to run to install it is buggy as hell run under WSL.

Have a look here, you don’t need WSL if you’re using docker which should be less buggy

You do unfortunately on Windows 10 enterprise. After installing docker for Windows it forces you to install wsl 2 before it will run.

Luckily the docker ran first time in seconds on Linux.

Have a look here, you don’t need WSL if you’re using docker which should be less buggy

Installation and Getting Started — OpenDroneMap 2.9.1 documentation

Just having a play. Seem to get lots of gaps here and there even with a lot of overlap. Is there any downside to just going completely overkill with the number of photos to try and fill the spaces in?

Exponential increases in the number of matches you have to compute unless you have matcher neighbors turned on (which with GPS tagged images is a godsend, I use between 6-12 depending on my overlap)

There’s no need for an obscene number of photos it’s the overlap that matters, I’d check configuration first perhaps by running one of the small demo datasets?