First go using the Sphere on a Air2s. I’m reasonably happy with the definition and exposure but disappointed with the wonky stitchline but it may down to the fact that I had the lens protectors on which seems to be a possible cause and it was very windy. Iniitally I fitted the Sphere to the drone and set up in the usual. Waited and waited to a GPS lock but after five minutes gave up. Took the Sphere off and restarted the drone and immediatley got 22 satellites, then put the Sphere back on and lost a couple of satellites. Seems to be a general problem but OK if you know about it. Did a straight run up and down the length of the course and a flyover of the stand. Edited the video in Insta Studio to get an MP4 and then in PowerDirector. Waiting for decent weather now to use it again without the lens protectors and see if the stitchline is better.
Had permisson from the racecourse to fy but noticed the previous day when races were on that there was a Matrice flying outside the course boundary during every race. The racecourse people aren’t happy about it but at the present time it’s legal. 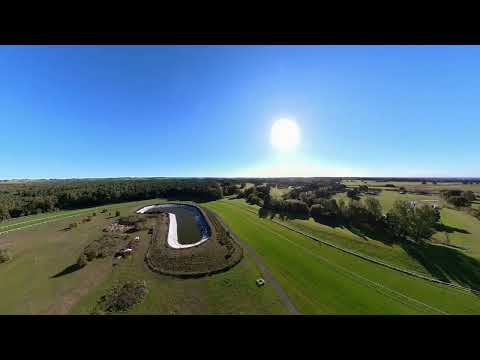 Panorama. Screenshot from the Sphere video.

I assume it should be possible to upload to YT as an interactive 360 video?

Had permisson from the racecourse

Not that you needed it, its sometimes nice to tell them though I guess.

Big money in on course betting.

Yes I could have just done it but we were staying on the course campsite and I wanted to take off from the inside of the course so just thought I’d ask. I’ve found a lot of the time people will say yes it’s ok if you are polite and explain what you want to do. If they say no then you have make the decision to do it if it’s legal. Sometimes I think people just do it which doesn’t always help the image of the hobby and gives the press more opportunities for anti drone headlines.
Yes very big money at stake and the tech involved must be very expensive to get a stream without any significant lag.

OzoneVibe. Yes the video can be saved as a 360 degree if you want. As a first go I decided to just to it in 2d.