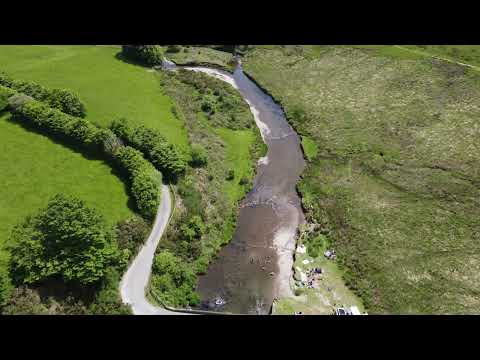 Mini 2 doing what it does best, going unnoticed!
This is why i bought the drone, to view beautiful places when walking, from different perspectives.

Great scenery on Exmoor. Were you parked by the bridge?

Agreed Exmoor is a fantastic place to fly. Part of my agreement with SWMBO was that we still walked on Exmoor whilst I flew the Drones. Little did she know how much further we would be walking!!

The car was miles away… We parked in Withypool and walked the footpath to Landacre, crossed the road and used the footpaths opposite to climb the hill.
The route when worked out from Withypool to Landacre to Withypool should be around 5 miles, I managed to add 3 miles whilst searching for a suitable TOAL place and wandering.

The carpark would be suitable for TOAL although there were far too many people enjoying the sun. I much prefer to fly unobtrusively than interact with people, miserable git that I am.
There are plenty of other layby/pull ins if you are looking for a quick flight.

There’s nowt like a bit of countryside scenery, sunshine and the sound of birds. Totally chilled now after a crap game of golf! Cheers.

Hi! Thanks for the reply! Yes. I am local to Exmoor. Shouldn’t have a problem TOAL from many quiet places and footpaths. Exmoor National Park only own around 7% of the land and mostly these are obvious areas such as nature reserves (where you need permission from ENPA) as opposed to laybys which by their very nature are public. The only reason for asking was to do with the number of people there when you flew over and around the bridge, and I wondered if you had had any “interaction”. Thanks again for the great views.

you had had any “interaction”

I don’t even talk to SWMBO unless it’s imperative to maintain my head on my shoulders!!

That made me laugh!!

Great place for a flight picnic & a paddle……nice video