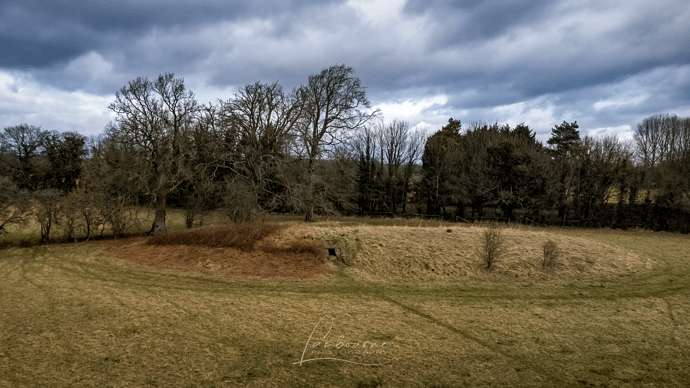 TOAL was from the field, as there is a public footpath going through. Be carefull with the power lines running through the field, close to the barrow.

The monument includes a long barrow set on level ground close to a tributary of the River Avon. It is rectangular in plan and orientated east-west. The barrow mound is 55m long, 25m wide and 1.5m high. A drystone entrance on the south side of the mound leads into a small chamber c.2m square while two further chambers are recorded on the north side of the mound. Although no longer visible at ground level flanking ditches, from which material was quarried during construction of the monument, run parallel to the north and south sides of the mound. These have become infilled over the years but survive as buried features c.3m wide. The site has been partially excavated, finds including the scattered bones of two adults in a chamber on the north side of the mound, nine skeletons in a chamber on the NW side and eleven skeletons in a further chamber.

The originator declared that this location was not inside a Flight Restriction Zone at the time of being flown on 05/02/2022. It remains the responsibility of any pilot to check for any changes before flying at the same location.