Leighton Buzzard Railway - Added to Everything Else in East of England 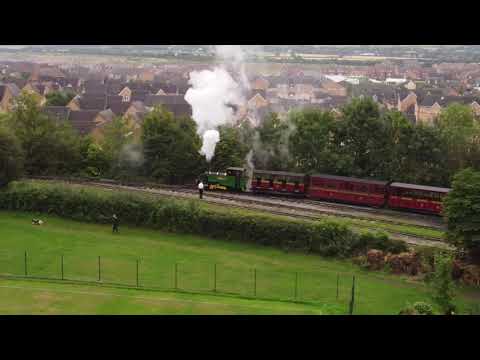 This location has been recommended to fly your drone in the Everything Else category in the East of England region.

Built in 1919 to carry sand from the pits to the north of Leighton Buzzard to the canal and standard gauge railway to the south, the Leighton Buzzard Light Railway was the epitome of an English narrow gauge industrial railway. Although it briefly used two steam locomotives when it opened, for almost all of its lifetime it used characteristic Motor Rail "Simplex" petrol and diesel locos. These were first developed for use in the trenches of the first world war and continue in production today. The line eventually had more than 40 of these rail tractors, with many more employed in the sand quarries themselves.

In 1969 the railway sucuumbed to road transport, but a few dedicated volunteers saved most of the line and restored it to working order. For the first time in its history, passengers were carried. Steam haulage was re-introduced after a 50 years absence. The line now runs from Pages Park to Stonehenge and offers a fascinating glimpse into Britain's industrial past. In addition to a collection of steam locomotives from the UK and around the globe, the Leighton Buzzard has perhaps the most comprehensive collection of ex-industrial internal combustion loocomotives in the world. It offers a ride that passes through industrial units, housing estates and open countryside and climbs what may be the steepest section of adhesion-worked public railway in the UK.

The originator declared that this location was not inside a Flight Restriction Zone at the time of being flown on 22/08/2021. It remains the responsibility of any pilot to check for any changes before flying at the same location.