Walked along the canal this morning with the DJI Pocket 2 and in between people and dogs managed to get a scene I enjoyed taking. 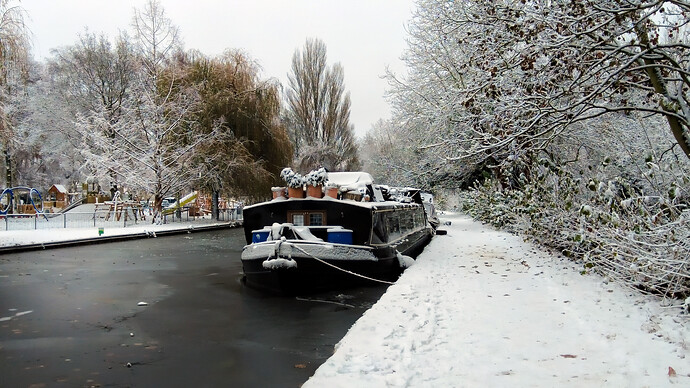 I hope they weren’t planning to go anywhere!

That ice is just a couple of millimetres thick, it’s not going to hold anything in place

I viewed a 70’ narrowboat at Devizes marina on Saturday, on the Kennet & Avon, the sales chap passed me a shard of ice. I was surprised on how thick it was, being a good 2cm thick. He went on to say …

Whilst most narrowboats and widebeams have a steel hull, there are many wooden and glass-fibre hulls. Even though a narrowboat could no doubt break free, the broken ice can damage non-steel hulls when passing by. Which is why ‘the done thing’ is to sit tight until it melts.

Good advice in principle. The thing is, few days old ice isn’t hard enough to break anything unless it’s incredibly soft. A boat weighting hundreds/ thousands of kilos will cut straight through that sheet with at most couple of slight scratches to the paintwork.

It takes weeks of temperatures below -10°C before ice hardens (“steel ice”) enough to cause real damage to any vessel. And even longer where the water is flowing, like in the rivers.

I grew up in Scandinavia so I got plenty of experience of winters and ice. Heck, I’ve been rowing on lakes with early winter ice because the ice wasn’t yet strong enough to walk on.

Edit: just for fun, this is what you can do with a rowing boat and ice: 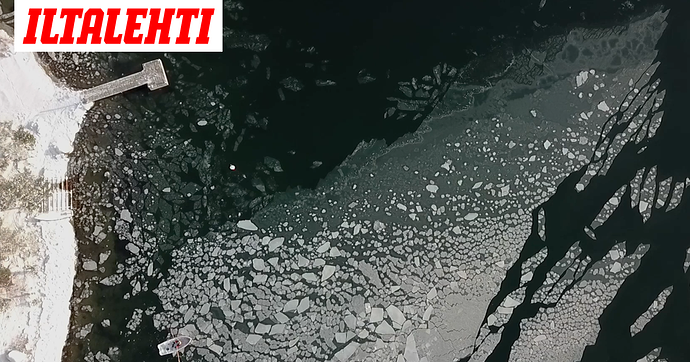 Wonder if the Canal & River Trust waive the frozen days from the days you’ve been moored limits.

A lovely winter scene. Did you get any aerial shots?

CRT are quite relaxed a lot of the time. The default is 2 weeks in one place. But if you have issues with the boat, they’ll normally give you more time. Some folk have spent 6 weeks at a mooring and they’ve been fine. And with ice, I am sure they’d put safety above mooring time.

It was a shopping day and visiting the local post office to send some gifts. I’m hopeful of getting in the air tomorrow subject to getting bird seed and a winter warmer.

As the owner of a glass fibre river cruiser on the Norfolk Broads, I can confirm that even very thin ice can cause damage to the gel coat of a fibre glass hulled cruiser.

As mentioned elsewhere, it’s a matter of etiquette for owners of steel hulled craft to not cause damage by moving through the ice, even though they are considerably less likely to their own vessels. 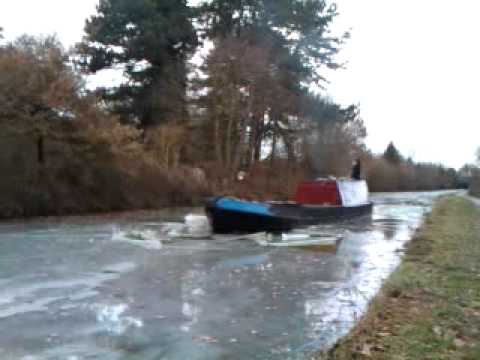 It varies from boat to boat. Fresh water tanks can go from 400L to 1000L, especially on a widebeam. Many of the narrowboats today just use cassette or compostable toilets, so don’t need black water tanks.

A few years old, but that’s literally round the corner from me.

Are those polar bear tracks I see next to the boat ?

To give an idea, last week with mostly three of us on board, but four for two days, our black tank was almost three quarters full by the end of the week. That was being careful (us boys don’t always need an actual loo, after all). Unfortunately, the marina pump out machine was frozen when we got “home”, as were the actual loos at the marina, so it’s still three quarters full!

CRT have stopped accepting waste from compost loos in their bins, so dunno how compost loo people carry on now. Good old fashioned Elsan is still common - the latest idea are incinerator loos (honestly, Google it!)

Fresh water - we normally fill up every other day - depending on tap pressure, through a normal garden hose, that normally takes 20 mins or so - even being careful, it’s scary how much water you use.

As for moving through the ice, as others have said its not the done thing, but there are times when it’s necessary. Luckily there aren’t too many GRP boats on the canals. The only real problem for a normal steel narrow boat is the ice removes the blacking.

Canals rarely freeze uniformly - the more open, the thicker the ice, the more sheltered (trees, cuttings, bridges) the thinner (or none at all). It doesn’t have to be super thick to stop a boat - a strong crew member at the bow smashing the ice with a pole helps no end. And the ice doesn’t break evenly - steering can be nigh-on impossible.

Most boats, of course, will be back at their home marinas by now. Some continuous cruisers will be holed up on sets of towpath CRT designate as winter moorings. There are two sides to the CRT - staff and volunteers on the ground are sensible, practical, helpful and skilled at what they do - trying to keep a 200 year old infrastructure that involves water working. Then there’s the contact centre and head office……