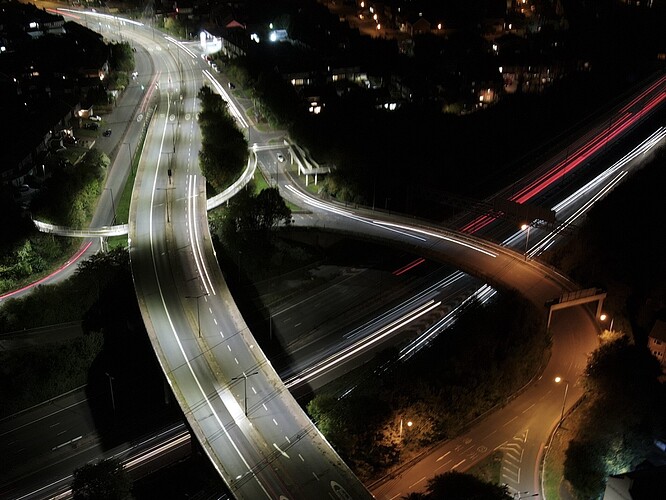 The inside reverse roundabout. Nice shot.

Hi Sawk, I’ve been playing with Hyperlapses and waypoints over these last few weeks but haven’t been able to get cool light streaks like these. I have an Air2S. Can I ask what shutter speed and other setting you used? Also, did you need to do anything in Post? I’m headed to Atlanta in Feb and wanted to get my game down before that.
Cheers

Thanks, but what’s post? No the photos are as taken just cropped. Taken with my Air 2 the camera was out of auto, I did t do anything with ISO so it was probably 100 and I just played with shutter speed. I think this was 2 seconds + because less than that and the ‘streaks, were shorter. I was lucky that there wasn’t much breeze. Good luck for your trip.

Many thanks for that. Did you get the info from the image itself? I should’ve thought to do that.

Yes, I did get the information from the image itself. Downloaded the image then read the EXIF. EXIF travels with ‘most’ pictures unless it has been intentionally removed, or sometimes depending upon image editing software, sometimes it’s removed from the image by the software unintentionally…

Hi @AllThingsDrone Dave, I’ve removed your phone number from your post, one of the perils of replying by email on the forum is it includes your normal email signature, don’t want you getting spammed to within an inch of your life ;o)

Thank you! Parametric emailed me independently and warned me of the same issue. Thanks for that! Obviously the first time I’d posted. I’ll be sure to check first that the auto signature isn’t added when before I send.