Just gone to take the drone out so I was calibrating IMU & gimbal before I went out ,
However never noticed this before , when you’ve powered up the drone it’s usually silent when sitting there until the fan kicks in ok , well when the gimbal is doing it’s dance you can hear the motor ( of the gimbal ) then when it stops you can still hear a motor noise

never heard this before and it wasn’t there before ( I don’t think ) , I’ve literally packed it away then today I noticed this any ideas , thanks in advance ……

Edit are or is the gimbal motor always running if that makes sense , thankyou

then when it stops you can still hear a motor noise

Just had the stethoscope out

it’s very faint and for the life of me I can’t remember if this is how they are , brain fog

After many on off on off on & ear too the drone I believe ( even after ripping the net apart for answers with no luck ! ) the fan inside idles at a minimum when you first power on until it gets warm and kicks in properly , I did not know this otherwise I would not have posted this in the first instance , can only apologise for wasting space on the forum !

Took me hours to work it out tho but I guess my assumptions were incorrect !

Just gone to take the drone out so I was calibrating IMU & gimbal before I went out ,

I’ve been clearing out the living room and everything has been thrown about the last couple of weeks as if in transit , so I thought as it had been on a journey “ so to speak “ around the house calibrate the said rather than just incase it prompted me to do it when I was out , also last time I flew it it was a little what I would call unstable in hover but that could have been the slight wind , thanks for asking

Since the original post that I posted last year, as mentioned I discovered where the noise is coming from on my drone, I’ve had the drone apart & cleaned the cooling fan with, air in a can, however when the fan is at idle over the weeks months it is getting louder & louder at idle this is, I’m not on about when it kicks in, previously when discovered it was just about noticeable but now it’s like a loud ish buzzing but, then fine when the fan kicks in, unless the kicking in drowns out the buzzing, if that makes sense, so best to be safe than it pack up, i have ordered a replacement which is quite an easy swap, fingers crossed. So my question kindly is,
Has anyone used droneoptix for parts ? I’ve usually used replace base, unless I have had to send it to drone doctor, I have personally never heard of them, they are based in Lincolnshire, they say there parts are OEM so I’ve ordered a new cooling fan & heatsink all as one part, which was also a really good price compared to other suppliers, were they supply just the fan without the heat sink, for about a third of the price more expensive, also if my thinking is right the one I ordered comes stuck to the heatsink which screws to the motherboard, as if you buy just the fan alone it means removing it from the heatsink which has 3M double sided sticky tape on it which I thought maybe a bit of an ache.
I hope this solves the problem.

Isn’t the drone a new replacement for your downed one

Isn’t the drone a new replacement for your downed one

Yes I bought this one second hand but with just 1,1/2 hours flying time, I know fans make noise, also when I first noticed it I wasn’t sure, as my old sunk one made no noise @ idle, this one is getting louder as said, buzzing if you like, so for the sake of £22 I thought I’d swap it .

Hhhhmmmm genuine , I’m not too sure, they can have that back, I’ll stick with the noisy fan for now, ordered part on the left, 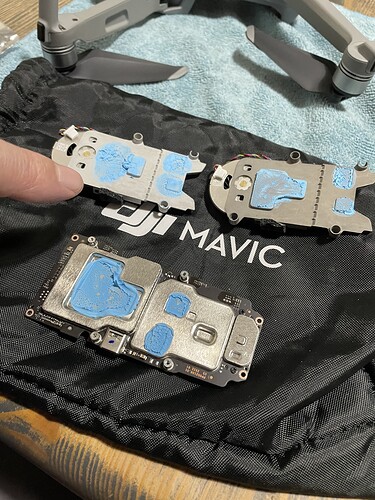 Edit : it just get better, now I’ve just seen this,

We stock only the most reliable genuine parts and carefully test every second hand item.

Re assembled the fan / drone, with my original part, also re seated the fan with the thermal paste, tightened it back down & now the buzzing has stopped, maybe the vibration from the fan had slightly loosened it.

I had a MA1 with the same problem, it also overheated. When I took it apart and changed the fan, I found that DJI had left some of the double sided tape sticking into the fan blades, slowing them down and making it sound like a lollipop stick in the spokes!

I think it’s all ok for now since the above, time will tell, thanks