Maryhill Locks, Glasgow - Added to Rivers and Canals in Scotland 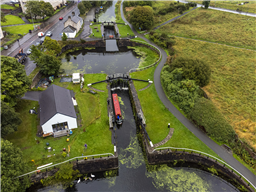 This location has been recommended to fly your drone in the Rivers and Canals category in the Scotland region.

Maryhill Locks, built 1787-1790 for the Forth & Clyde Canal. There are five locks in this flight, which is known as the Maryhill Locks. Numbered 21 to 25, they assist the canal in its descent into the Kelvin valley, and each lock is connected with its neighbour by an oval basin. The purpose of the basins was to permit boats to pass each other whilst going through the series of locks.

The originator declared that this location was not inside a Flight Restriction Zone at the time of being flown on 14/09/2021. It remains the responsibility of any pilot to check for any changes before flying at the same location.