Well I’ve had some time on the new Mavic Air this weekend and thought I would write down my opinions which might/not help some of you on the fence.

Firstly, I have been flying the Mavic Pro for about four months (prior to the an Inspire 1 and 2 personally and commercially).

One of the first things you notice about the Air is the build quality, it is simply beautiful and feels very well put together. This is especially try of the gimbal, which looks and feels much stronger than the Pro. The lines are all very smooth and the plastic shows none of the join marks you can see on the Pro.

The controller is somewhat of a disappointment, there isn’t actually much wrong with it, just coming from the Pro I miss the additional buttons (C1, C2, the 5d button and of course the second scroll wheel). In fact I miss the second scroll wheel the most since I would use this to adjust the exposure (C1 to switch between ISO and shutter speed) and the wheel to adjust the values. Having to bring up the camera settings screen and slide the wheel is no where near as convenient, especially in the cold wearing gloves.

The removable sticks are a benefit and a negative. They are tiny and easy to drop, but being able to remove them means the controller is even smaller. More on this later.

I also miss the screen from the Pro controller which can be surprisingly useful as it provides a lot of info.

The bag (with the fly more combo) is in my opinion horrible! Its actually no smaller than the Pro bag, although very different in its dimensions (but does allow you to fit in the charger/hub as well easily). However, the space for the controller means you HAVE to remove the sticks before packing away which is a little fiddly and adds another 30 or so seconds. Lastly, what is the big flappy pouch on the front about - just looks weird to me.

So onto the flying experience… Like the pro, the gimbal sits low so you need to be careful to place it on a fairly smooth surface. She fires up nice and quietly, but boy does she hum when in the air. Like angry bees, higher pitched and louder than the Pro and audible at greater distances as a result. You also hear what I would describe as fluttering as it adjust itself in the wind - must just be the higher pitched prop sound as you don’t hear that on the Pro.

Out of the box, as usual, the settings are far too aggressive so need to be turned down to achieve nice smooth flight. But she does fly beautifully especially given the size. She is quick and nimble and in sport mode extremely quick although bear in mind the gimbal won’t be able to always keep up and won’t sit straight on extreme angles so you will see a fair bit of movement.

The camera - well I appear to have something of a dud in that there is noticable distortion in the centre of the frame (see my thread here), particularly on horizontal lines, but that aside (assuming it is just mine) here are my thoughts. Out of the box the colours are way off, the images seem to generally be too dark and contrasty and also have a magenta tinge. I’m not too worried as you have some control over these settings and no doubt future firmware updates will improve things.

I have also noticed that the fixed focusing seems to mean the first 2/3rds of the scenes are nice and sharp and this tails off leaving the final (distant) third looking much less sharp, perhaps a little muddy. This is especially noticeable when comparing similar footage from the Air to the Pro. This is evident in photos and video.

What about the bit rate increase from 60mb/s to 100mb/s. Well there is a definite improvement in the foreground, you just don’t see the noise that you see in the Pro video, but the background almost looks worse as it is fuzzy/less clear. Seems to be a bit of a trade off with the fixed focus.

Quickshot modes - yes these are pretty cool and great that they (like panoramas) are automatically created in the Air. To get the best from these and video in general you really need ND filters so you can set the shutter speed correctly as the resultant video (from asteroid) wasn’t as smooth as expected.

So a beautiful and beautifully created craft which is easy to fly and looks like it could withstand some little bumps and knocks but for me the camera isn’t all it is made out to be. Perhaps this is just my copy of it?

Nice review, thanks. I’ll reserve judgement on mine until I get more time in the air with her.

Do you have video or photos to share particularly with the distant ‘fuzziness’?

Yes, I will try to get some sorted tonight. 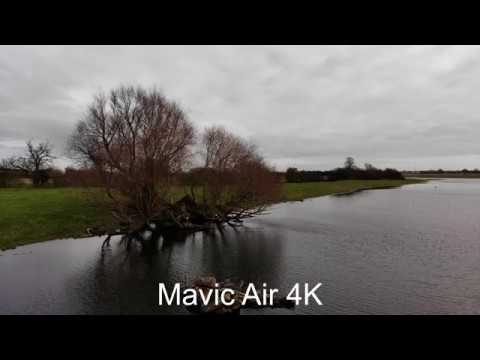 Yup, I agree, not good… If you look at the bush in the middle of the frame from 0.33 you can see it shimmy a little, not sure what’s going on there, almost like tiny bit of jello. The MP footage looks better to my old eyes…

One thing I forgot to mention was the gimbal lock, the Air’s design is just such an improvement over the Pro, being so easy to use. Literally just slots on and clicks in place with no fuss.

What sort of flight times are you getting from the battery ?

Down to 30% I was getting approximately 16 minutes which I didn’t think was too bad (covered around 1000-1400m during each flight).

Can I ask if you (or anyone with an Air) have any issues with either signal quality and/or range?

With it only communicating via WiFi I wasn’t sure how much of an issue thus might be ‘in the real world’?

Whilst I only kept it for a few days before returning I didn’t encounter any video break up and only the very occasional lag of s split secomd, where you just see the picture jerk a little. I was actually quite impressed and kind of forgot about the technology and just got on with flying it (which must mean it just worked).

I will caveat the above with the fact that I didn’t fly further than about 350m away and not in built up areas so it wouldn’t have had too much interference to deal with.

I’ve been 3,800ft out now in FCC mode and no sign of any break up. There are loads of videos now showing they’re good for 2km easy and more.

I just need Litchi to add support for the Air and I’m set, I rarely fly BVLOS anyway.