Has anyone else had this?

Fly app gives a popup for battery firmware update, I click update and it shows at 70% progress immediately then after around 30 secs I get an update failed message.

I have three batteries, one does not give an update prompt, both of the others do the above.
DJI suggest sending the two back for assessment but if its a quick fix I’d rather not lose 60% of my duration for however long it takes.

BTW no swelling or defamation.

It was covered in the Mini 2 firmware thread

Try this to refresh the firmware

@Fatfred_flies You Can downgrade or refresh the firmware using DJI Assistant 2 (Consumer Drones Series) To allow Firmware refresh/downgrade you will have to modify a .ini file Go to: C:\Program Files (x86)\DJI Product\DJI Assistant 2 (Consumer Drones Series)\DJIEngine Find and copy defaultsetting.ini rename to defaultsettingsold.ini paste the copied file somewhere else (desktop?) Open with notepad and change [wm161] upgrade_enable=0 to 1 Save the change, copy and repaste to C:\Program …

Thanks, doesn’t help much as I am using a Mac but at least I know its a thing and not me being dim.

Drone-Hacks, the best way to hack your DJI Drone - Download

Interesting, so I would downgrade the drone firmware and this should allow the battery firmware upgrade in theory?

Yes try that or reinstall the latest/ refresh

Good idea sadly the Mini 2 doesn’t want to connect to the app.

Power it up with the battery

I already tried that, I’ll give it another go but not hopeful. Really appreciate your help though. 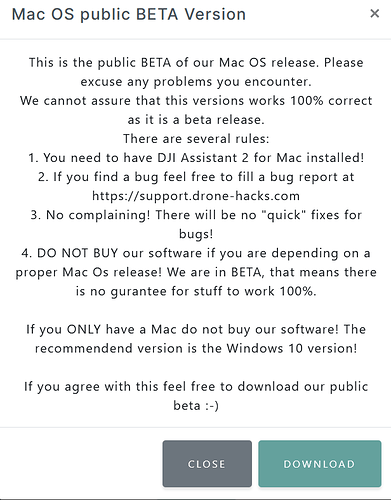 This gets stranger by the minute. Previously deleted the Fly app on my phone, loaded an older version all to no avail. Then updated the Fly app again, tried to load the battery firmware on one of the batteries and it worked! The third battery is still failing to update - very weird.

Wrong, it didn’t update at all. Just decided to tell me that their were no firmware updates. Just restarted from scratch with the same battery and it still wants an update.

Don’t know what to suggest next!
I always uninstall the app and reinstall the newer versions rather than updating

Where are you based? maybe someone local could help

Appreciate your efforts. I can get my hands on a Win 10 laptop. Just to clarify once the ini file is modified what is the procedure?

Connect drone after boot sequence, downgrade firmware for drone then attempt to upgrade the battery firmware or the drone firmware?

Should this be done via the software or the android app?

Thats ok, its good to help!

Thankfully it worked. Took a while to get Assistant to see the Mini 2 though. Had to change the USB cable which seemed to do the trick. Once again thank you.

Excellent glad it worked, did you use a windows pc?

Yes, dug an old one out, bit of a hassle but less so than sending the batteries away