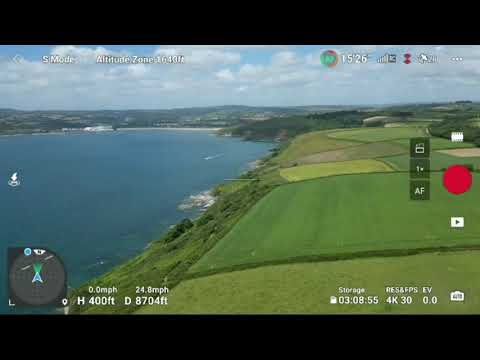 Anyone brave enough to do this Mod? Looks like it works to me.

Doesn’t seem necessary for VLOS flying and would spoil the very nice balance of the controller. So a “No” for me.

Quite happy with the FCC hack that was done on my Mini 3, no problems with signal since.

Whilst I have had significant range with my drone out in the sticks, over a town with its shit loads of WiFi APs, I’ve lost connection at 250m … well within VLOS.

While many are complaining about the range of the Mini 3, there are plenty of others who are perfectly happy with it, Also it seems that many in the US seem to be having better range than in the EU… I have the Mini 2 and so I cannot really comment either way, then again I have never flown it beyond VLOS. Sure if modifying your controller like this is something you are happy to do and it helps prevent signal loss within VLOS, which some have experienced, though I have a feeling many of them are flying in areas of a lot of interference, then that’s al well and good… but when someone demonstrates how effective the modification is, by flying, way beyond VLOS, that is just not good… Just as with that guy in Hawaii who does range tests, flying out for miles and occasionally having to go retrieve their drone, as it doesn’t have the power to get back, it isn’t the sort of thing that gives the wider drone community a good name… I now there are a lot of people who argue that VLOS is very vague, as for one person , that could mean 250-300m and another it could be 500m or more, that’s not the point… The fact that DJI will give range specs as 10km whatever, doesn’t mean you can go fly that far out, what it should mean, is if you fly within VLOS, you should have zero problems with signal. However they do such test in the most ideal of conditions, so most of their stats should be taken with a pinch of salt and no two drones will ever be the same.

Anyway, for now I am just glad I decided to stick to the Mini 2, but from the number of videos and comments about range problems with he Mini 3, it certainly appears to be a problem that needs to be resolved… Even using the old controller, many have the same issue, so it’s obviously not just the controller that’s at fault here… My thinking is it’s the drone itself and the new design,isn’t quite up to the task… YET

Think I’ll be hanging on to my Mini 2 for some time to come.

With reference to the video.

A little knowledge can be a dangerous thing. My father would read a pamphlet and then profess to be an expert on the subject. One of the reasons we very rarely spoke.

Anyway, even if the antennas really had the 6dBi of gain, as claimed in the video, it’s not that much more than a regular dipole which has a gain of 2.1dBi. And the angle of the quoted gain may not be optimum for the drone. I’ve opened up a couple of these supposed high gain Omni antennas only to find the same sleeved dipole used in the smaller antennas.

This is because of the lower power limits in Europe, which is 100mW Effective Radiated Power (ERP) on 2.4GHz and 25mW ERP on 5GHz. In the US it’s 400mW ERP on 2.4GHz and 700mW ERP on 5GHz. This is due to zoning regulations laid out by the International Telecommunications Union and is not dictated by a country’s regulator. A few years back I approached both the RSGB (Radio Society of Great Britain) and OFCOM to see if there was a possibility of allowing amateur radio licence holders to install higher power equipment in model aircraft. The RSGB didn’t reply (no surprise there) and OFCOM just pointed me to the clause in my licence that stipulated that no amateur radio transmitting equipment can be installed in any airborne platform, GA, model aircraft/drones, or balloons, and the only devices permitted were those that complied with the ITU classification of low powered licence exempt devices for the region being operated in.

Sorry about the above ramble, once I start I sometimes forget to stop.

Sorry about the above ramble, once I start I sometimes forget to stop.

I actually enjoy reading from those who now what there talking about as I might not able to take it all in as I blame it on age but really as I’m thick as shit no school education just fantastic commonsense but I do definitely absorb some.

I did strip down a Mavic pro controller after losing my bird and buying another, fitted a alientech antenna’s and definitely noticed a better range but not as much as i was expecting tbh, it was actually a very simple procedure to do but would I have done it at the time if it was my only controller ? probably not!!

I know we all harp on VLOS and I still maintain a large percentage of us break them accidentally or not, looking at monitor split second can make you lose sight going behind a house tree or hill.

alot of us not looking for distance, I like to fly it with continuous strong signal connection and at all times whenever in sight or not.

??? Is it only me that noticed that his battery% up and down uunnaturally erratically.

@Nidge I need a wee bit more rambling from you please

Please explain why these mini 3 pro birds so pathetic on signal, is it firmware or hardware, is it bird or controller as 6 years ago I bought a Mavic pro out of box on first flight it went for miles, so in theory technology as moved on but not the case of this latest release

When you see the inside of the SC there is sod all to the antennas btw what is the dbi of dji wee internal antennas ? Because im not worried about modding mine if fitting a Duel 6 dbi Antennas would definitely help signal strength behind trees and buildings as it’s driving me crazy I cannot fly around my property unless I’m up high to avoid and interference with signal.

You also said stripping these high gain antennas you question there dbi gain, so is there a genuine 6 dbi high gain on the market or not because we are throttled by European zone.

I seen on GADC tonight some real amateurish bodge job which I know I can do better and tidier as on test they got 9500ft and I stayed around 150ft high so if they gone higher the distance been even further imo, maybe this is feasible as it’s in the US and maybe this is because of the low power limits Europe have but if the controller was hack to FCC would this help the dbi high gain ?

@Nidge I need a wee bit more rambling from you please

I’m sorry for the late response. I do intend to reply, but currently I’m not firing on all four cylinders.

No problem mate you look after your health.

Which hack are you using? I have the Mini 3 with the RC controller (built-in screen) so need something that will work with that.

I noticed there is a hole if you take off the controller stick holder/rubber at the back. So potentially can 3D modelling a part to install the antenna without damaging the controller. I might give it a go once I get my DJI RC back from my replacement request…