Found this on a FB group…Link to document…Drone use | Newcastle City Council. 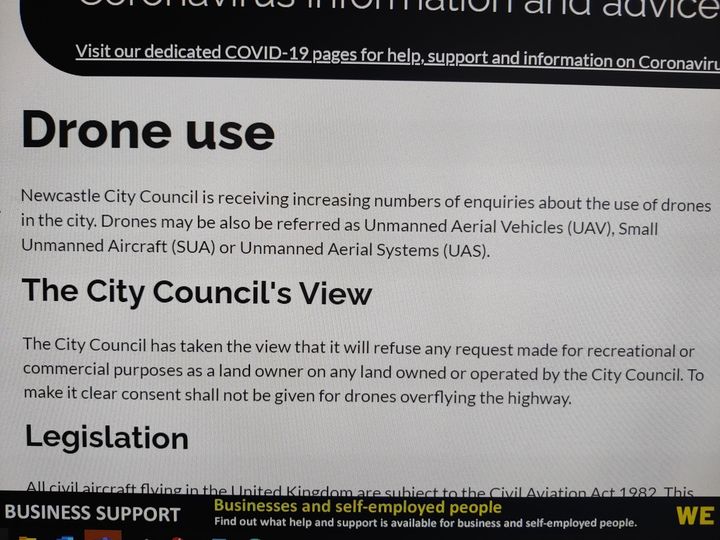 Is this not the same as previous posts, they can’t blanket ban the air space but can request TOAL from public spaces if it is incorporated into a bye law and not just because someone on the council has decided they don’t like drones.

Exactly why I don’t interact with councils, the more questions they get, it’s easier for them to prevent future work by just saying no

When it comes to grammar, and the written word in general (I’m dyslexic), I’m not the most conscientious scribe, but whomever penned this notice should have had it proof read by a grownup before publishing it.

As for the message itself, if it’s to hold any legal weight, I would have thought it would include some reference or citation as a qualifier, rather than essentially saying “We don’t like drones, so

Not worth the pixels it’s written on without something legal to back it up. Don’t ask and follow the drone code is a simple version of their message.

Your topic title has also been updated.

Hi, did you not read the rest of the statement from them… ? “Please note: This information has no legal force and is not an authoritative interpretation of the law, which is a matter for the Courts. It is intended to help individuals and businesses to understand in general terms, the main features of the legislation. The information is not a substitute for the legislation and you should refer to the text of the legislation for a full statement of legal requirements and obligations. Where appropriate, you should seek your own independent legal advice.” Cheers

@Malcy not really bothered about the rest of it, we all know that they cannot stop you from overflying, the fact is that they state that under no circumstances will permission be given to use any land owned by the council for drone flying, that means TOAL which they can do and that is the worrying part.

Again, as I understand it, legally there is no difference between TOAL with a drone to kicking a football around a park or taking your Cockapoodle for a walk in the local park. All are classed as recreational, including the flying of UAV’s and taking off and landing are a part of that. Football, or more explicitly ‘ball games’ can only be banned by local legislation ie a bylaw or PSPO. The same for dog walking, paddle boarding on rivers or canals, kite flying, picnics etc.

IMO all councils are playing a massive game of catch up now and are being caught out with the sheer proliferation in UAV ownership and their own powers to stop it.