Afternnon ladies, gents and all those undecided,

A previous aerial shoot I did at Somerleyton Hall got shared by someone and I’ve now been contacted by the owners of Otley Hall in Suffolk inviting me up there to shoot and put together a similar video. So, next Monday that’s where I’m off to.

It’s kinda rewarding when you get this kind of feedback rather than the usual comments on Faceache and YouTube. I’ll post up the finished clip when it’s done.

Anyone lend me £400 for the diesel to get there?

Sorry, I have to exist on a pittance from a grudging government - and I’m going 160 miles north on the weekend

Have you agreed a fee with the nice people at Otley Hall? Or suggested that they might want to have a couple of jerricans of diesel handy?

If of course you do get recompense in cash or in kind the flight becomes commercial. you may want to check with one of the insurers that offer per flight insurance what cover you can get for the day.

No recompense whatsoever. I’m doing it purely for my YouTube channel with an edited version for the owners to do with what they like with.

Just remember to get it in writing that you’re entitled to credit for that. Or even, ideally, come to an agreement on the copyright licence they have to use it. I’d emphasise that mostly it’s so you can maintain the right to credit for the work.

At least try tap them up for expenses !! (I bet they don’t do weddings for free, I also note they charge for corporate filming) 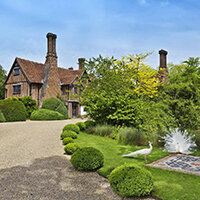 Treading on my toes a bit there, Phil! It’s only just in Suffolk Coastal, but there it is! It’s about 10-11 miles from me at East Suffolk Drone Photography. Have a fruitful trip if possible, Chelmsford’s a bit of a way. I’ll be casting you a thought on Monday

I look forward to seeing the finished product!

I have a shiny new Mini Pro 3 that I’ve not lost or broken yet - a good start.
Only got into drones for fun - not commercial at all… however, wouldn’t you expect some kind of reimbursement/contribution for the work you’ll do for Otley Hall?
Hopefully not rude to ask.

WHat are these usual comments you get on FB/ YT?

I’ve said right from when I started aerial videography I wouldn’t be charging anyone unless they offered to cover my expenses, which has happened. I do it because I love flying and I love putting the finished videos together just as much. The money isn’t important to me. I get enough back through the comments, both positive and constructive, from the various social media platforms I post the videos on. I used to produce music event flyers and promo record artwork as a hobby and didn’t charge what I should have for them. I just loved doing it (did single covers for Bobby Womacks cousin Binky and Kenny Thomas

) Underselling myself? Maybe. And people may be justified in saying so but it doesn’t matter to me. The only hobby I’ve got that I charge the proper going rate for is DJ’ing because it’s so cutthroat and will take the piss if you let it.

Yes, it’s going to cost me diesel and time but it’s going to be a lovely day, the missus and are having a lovely pub lunch on the way home, and hopefully, I can put together a decent video to go on my YouTube channel. What’s not to love about that?

Fair enough. Just wondered if it was a protocol thing (which would surprise me) or just you being generous with your time!

Hope you enjoyed the trip.