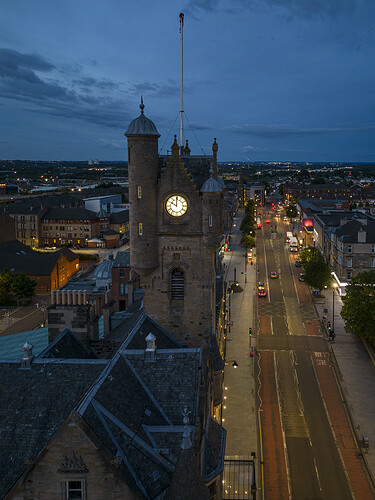 This location has been recommended to fly your drone in the Historic Buildings category in the Scotland region.

Parking is available on King St. behind the Main St. For views of the town hall and the Main St. toal can been done with sub 250 drones from either street. It can be very busy during the day, so best done early morning or late evening.

Rutherglen received the status of Royal Burgh in 1126 by Royal Charter from King David I of Scotland. The Burgh area includes the old heart of the Royal Burgh of Rutherglen around the ancient and unusually wide tree-lined Main Street. The town hall was built in 1862. To its west is Rutherglen Old Parish Church, the fourth incarnation of the institution which has had a building on the site since around 600 AD.

The originator declared that this location was not inside a Flight Restriction Zone at the time of being flown on 27/07/2022. It remains the responsibility of any pilot to check for any changes before flying at the same location.