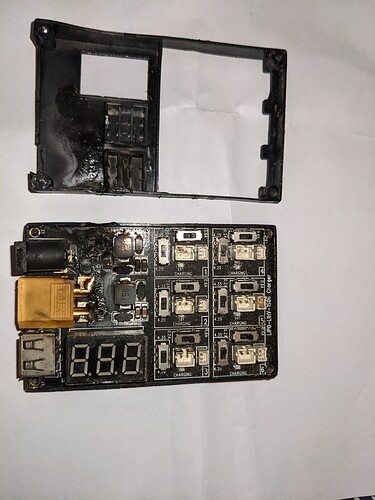 I’ve used this a while was fine last night and during the day off of PSU power.

Was out with my friend’s son on a field this afternoon me flying and charging using a 4s battery and it caught fire. Surely you can use a 1500mah battery on it? My new spotter was like… Fire… As I was bombing round the field assumed.he meant me tiny hawk… Was charging one 450mah 1s battery at the time

What were you using to power it at the time?

You say you were out in a field. It didn’t get wet did it? Maybe dewy long grass or something similar?

You say you were out in a field. It didn’t get wet did it? Maybe dewy long grass or something similar?

Yeah it didn’t did think similar myself… We had a picnic blanket for take off and landing, and was on there, fortunately not burnt. Wasn’t out there long and wasn’t damp. Weird as hell

And both batteries were ok?

The 4s is. Hope the 1s is, been packed away with all the others. Weren’t warm at the time. Pulled em out once got drone landed and goggles off.

Wasn’t scary as such just weird. It’s burnt up near the barrel power input if you can see 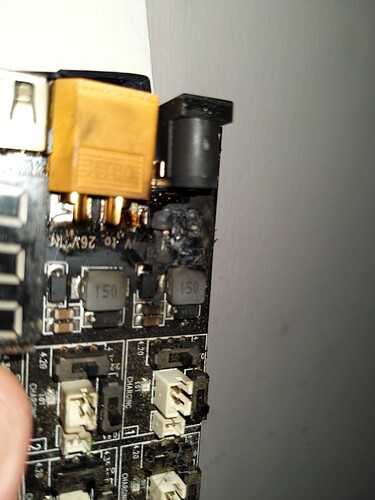 Yeah 4s is 16.8v so should be fine all things being well. Has the been dropped charger been dropped at any point? Could have caused some damage internally?

Very weird. It gets put away with my other chargers and goggles and no drop. Maybe something got in and shorted it but doubt it…just on of those things. Got other 1s chargers but like this display on this one and not usb heh. Might get another as part of another order.

Was the first time, as have had a PSU giving 12ish volts in the past. Actually the INP stated 11.7 ish

Was the first time, as have had a PSU giving 12ish volts in the past. Actually the INP stated 11.7 ish

OK, the thing is it isn’t the voltage that caused the fire, it’s the Amp discharged by your lipo. A lipo by design is capable of instantaneously discharging all it’s content to whatever you’ve plugged it into.

The lipo has a discharge rate written on it say “45-95C” that’s the multiplier of its Amp discharge capacity.

The XT60 is rated at 60Amp but the real problem is the components at the input stage of your charger which may only be rated at say 2Amp.

Fire is a given with all that Amp going in.

Looking at the damage on the board it appears it started at the output of the barrel connector into the input of the voltage regulator circuit. This is very odd considering you were using the XT60 as the input.

Both the barrel input and the XT60 input have their own independent voltage regulation, and as they both power the same charging circuits they should be isolated from one another. In this case what ever component isolates the barrel and XT60 circuits failed.

I have one of these charging boards that I’ve only ever used with a LiPo for the supply. I’ll dig it up later today and see if I can identify the component that failed, and more importantly why it failed.

Thanks guys. yeah get that a lipo can output fast, but surely it’ll only give what it’s asked for, and charging ONE 1S at the time (we’d had one pack so plugged it in).

Never used the barrel charger, so as Nidge said weird that. On;y ever used the XT60, though TBH this was @notveryprettyboy s, he kindly donated it to me…

I would get this again, or what else do people use to mass charge whoop 1s’s? Balance boards, etc.

You toasted the charger I gave you?

I never really used it that much, but when I did, it was with a 3 or 4s lipo

You toasted the charger I gave you?

Not having much luck with favours to me… You 3d print me a lovely Holder for my runcam 5, and I fly the drone into the distance with cam attach edbefore you can ship it. Give me a lovely 1s charger, and I set it on fire…

Looking closer at this it appears that the SS54 Schottky Diode, in this case used for reverse polarity protection, gave up the will to live.

These are usually fairly robust devices, so to smoke it like that must have been quite an exceptional circumstance.

Looking at the burn picture, it appears that one of the two ceramic capacitors has failed. If you look closely at the picture, you can see the fibreglass weave where the right-hand capacitor was sitting, ie, the epoxy has burnt away.

This is a known issue with standard multi-layer ceramic capacitors (MLCCs) placed straight across a supply with - as described - a high current limit on the input source.

They fail not-quite-short-circuit so dissipate a huge amount of heat in these circumstances.

I agree, the capacitors have failed and have become a resistor!

Massive current draw and they explode.