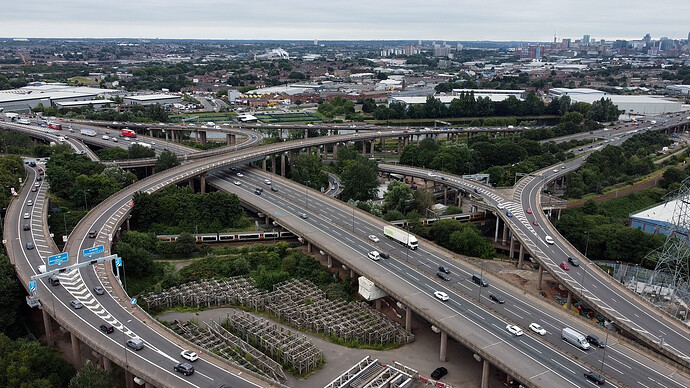 This location has been recommended to fly your drone in the Bridges category in the West Midlands region.

Gravelly Hill Interchange, also known as Spaghetti Junction, is junction 6 of the M6 motorway where it meets the A38(M) Aston Expressway in the Gravelly Hill area of Birmingham, England. The interchange was opened on 24 May 1972.

There are multiple take off and land places to capture this feat of human construction. As this is a busy junction of a major motorway, do not get within 50 metres and be at a height to not distract drivers before approaching.

Park on StoneChat Drive or there about. Next to StoneChat drive is a path that crosses under the M6 and takes over to an Industrial Site. Anywhere on this path is a good take off location depending on what side you want to capture keeping within VLOS.

Option 2 is to go on a walk and make your way around to Aston Reservoir.

Option 3 from where you parked either walk through the estate or drive back round to park approach. There is a Greek orthodox church. Lots of people were sat outside and I asked if I could take my drone up from the field to record the motorway, there were no objections, but who knows if you'll get the same response. From here you can keep excellent VLOS for recording things like time lapses.

Gravelly Hill Interchange, also known as Spaghetti Junction, is junction 6 of the M6 motorway where it meets the A38(M) Aston Expressway in the Gravelly Hill area of Birmingham, England. The interchange was opened on 24 May 1972. The asymmetrical junction provides access to and from the A38 (Tyburn Road), A38(M) (Aston Expressway), the A5127 (Lichfield Road/Gravelly Hill), and several unclassified local roads. It covers 30 acres (12 ha), serves 18 routes and includes 4 km (2.5 mi) of slip road...

The originator declared that this location was not inside a Flight Restriction Zone at the time of being flown on 18/08/2021. It remains the responsibility of any pilot to check for any changes before flying at the same location.

Thanks for all the very detailed details Ade @ensignvorik