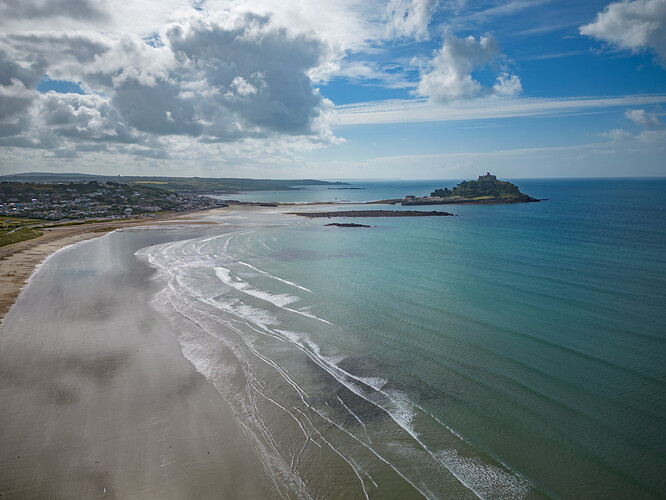 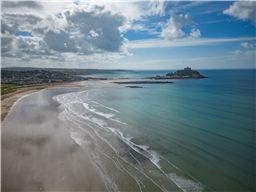 This location has been recommended to fly your drone in the Coastal Scenery category in the South West region.

Paid parking in Marazion, walk east to the edge of the NT owned beach. Take care with the meadows wildlife reserve to the north.

Plenty of open beach to TOAL at low tide, still a decent amount at high, beach gets very busy in the summer peak period.

You'll need permission from Penzance heliport to fly in the FRZ, they don't currently [13/07/2022] operate flights on a Sunday so that's your best shot for getting a permit.

St Michaels itself is a mix of private and NT, but you get decent shots from a distance regardless.

The originator declared that this location was inside a flight restriction zone at the time of being flown. Permission to fly was obtained from Penzance Helport / Sloane Helicopters. It remains the responsibility of any pilot to check for any changes before flying at the same location.

Excellent shot. Was that taken with all the default camera settings? Did you do any post-processing or is that as shot?

Love it that you can get permission for flight inside a FRZ.

It’s a manual HDR taken with a 5 shot AEB to help deal with the reflective areas and the clouds.

Because it was a bright and hazy morning, it’s been lightly tweaked to cut through the haze a bit, but that’s about all.

Generally it seems that with the small airports and heliports so long as you can convince them you are safe and competent you’ve got a shot at getting permission, same goes for the RAF FRZ’s there’s a few post on the forum about people who had got permits for Culdrose when they don’t have any flights on.

I can confirn calling RNAS Culdrose Tower when requesting permission are easy to deal with. They ask for the location lat/long height and approximate time.

Do you need to complete a form online or are they happy to give permission over the phone?

When I called, they were happy to do it over the phone, it was on the edge of the fly zone, just south of Wendron.

Penzance wanted me to email to have a paper records, but phone them first to discuss.