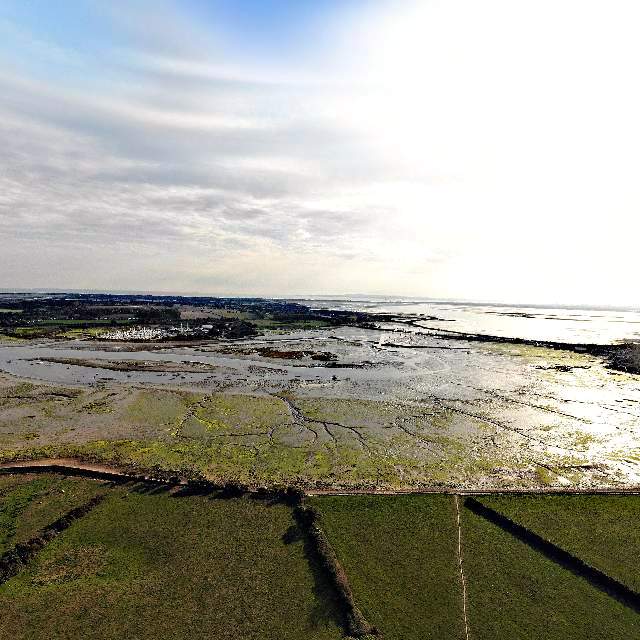 This location has been recommended to fly your drone in the Places of Worship category in the South East region.

The take off location is on a long distance footpath

Park near the church, being careful to leave the farmyard access clear for large vehicles. Walk into the cemetery and head toward the southwest corner where you will find a kiss-gate
opening onto the footpath.

The church and the remains of Warblington Castle along with the farm are what remains of the settlement, the population drifted toward the village of Emsworth two miles eastward.

South lies the water of Chichester Harbour and Hayling Island, to the west is the village of Langstone, now a suburb of Havant which lies to the north.

Rhe footpath continues along the coast ih directions. The two Langstone pubs are in walking distance and also photogenic.

An alternative access to the footpath is to park in the large car park of the Ship at Langstone, walk eastward and, after your flight walk back toward your car - but drink in the Royal Oak, it's a nicer pub!

St Thomas à Becket Church, sometimes referred to as St Thomas of Canterbury's Church and known until 1796 as the Church of Our Lady, is the Church of England parish church of Warblington in Hampshire, England. It was founded in the Saxon era, and some Anglo-Saxon architecture survives. Otherwise the church is largely of 12th- and 13th-century appearance; minimal restoration work was undertaken in the 19th century. Its situation in a "lonely but well-filled churchyard" in a rural setting nex Wa...

The originator declared that this location was not inside a Flight Restriction Zone at the time of being flown on 16/09/2020. It remains the responsibility of any pilot to check for any changes before flying at the same location.

Cheers @macspite for again adding a location to the DroneScene map

I’m trying to beat that cad @McSteamy2010 to the gold but he keeps tasking me with organisi g photo competitions!

Haha, distraction not working though. You keep posting more to DRONESCENE.

Think you need to give dronescene a break mate and create some more amazing posters.

Is there a way to see how many someone has already contributed?

Edit this to suit: