Anybody who is running within the TBS ecosystem will know what TBS Agent X is and what it’s used for.

TBS have just released TBS Agent M a mobile app version of TBS Agent X. Currently it isn’t supporting firmware updates but this is in the pipeline for a near future update.

But it gives you all the configuration abilities of Agent X on your PC without the need for a PC or cables so can be used in the field. You connect your phone to the TBS WiFi of the device you want to configure then just open up the TBS Agent M app on your phone and you’ll be able to change all the settings for your device the same as if it was connected to your PC with a usb cable.

Very smart stuff. If you’re in the TBS ecosystem its definitely worth checking out

Thanks for the heads up @DeanoG60 . I’ll have a look at that

Anyone used it in anger much, in the field?

I got it working at home, but it didn’t seem to be the most reliable of connections and I had to fiddle about connecting and disconnecting the wifi a few times before it came to life. It’s a very neat idea and I like the way they are going with their family of interconnected products, but right now I can do all the same stuff via the TBS Agent Lite on my TX16, or if I’m at home then plugging into the laptop gives a more stable experience.

On a related note, has anyone had any experience of the full trio of crossfire/tracer + vtx + fusion goggle receiver module, specifically in terms of the dynamic vtx power capabilities? I like the idea of being able to launch and fly off in low power mode and not having to blast out silly power unless you really have to.

I’ve tried the dynamic power. Its quick to ramp up, and slow to come down in power to the point were it wasn’t worth it. I also experienced the odd glitch in picture. I only tried it a few times though.

The last time I tried it with a unify pro32 hv, it only works with sa and not crsf. But they may have changed it since.

From what trappy was saying it’s only just been launched and still in development but some amazing things are in the pipeline but that’s as much as he said about it. Although firmware updates via Agent M is something that’s definitely coming.

But yeah I’m not sure why this WiFi stuff is actually necessary to be honest like you said everything can be done with TBS Agent Lite on the radio. And why you’d feel the need to update firmware in the field is beyond me.

But they have said amazing things are coming so I guess it’s a waiting game to see what they come out with. Worth keeping an eye on.

Mavlink telemetry via wifi could be interesting and has been mentioned. Some have even reported being having had it working, but I can’t get no satisfaction.

The CRSF transmitter module should be able to hand off all the telemetry it’s receiving via wifi using MavLink to, say, a laptop running Mission Planner or QGroundControl or something. Interesting to have a nice laptop-based ground station if doing long-range waypoint missions etc.

Dunno - I’m sure there are more interesting things in the pipeline too, as you say. 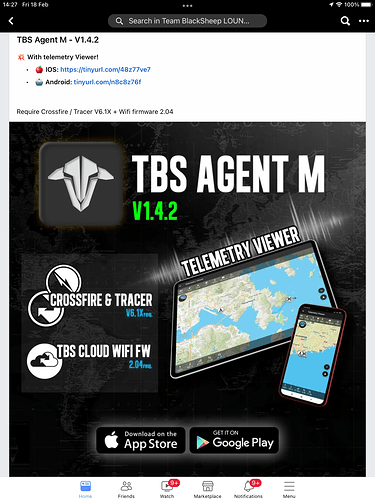 Resuscitating this because after A WEEK of trying to get MAVLINK over TBS Crossfire working and it ‘sort of’ working I found the issue, and it might help someone in future.

It was working, but in ‘emulation’ mode. There’s no documentation on what that means, but turns out basically it’s when it doesn’t actually get data through so emulates it using CSRF, but that means it’s a 1 way street so no uploading missions or anything.

I’m still doing RC by CRSF, but MAVLINK for live connection to mission planner (it is enabled for RC as well actually, but only if CRSFfails)

Turns out, the MATEK FC UART Numbers don’t actually line up with the ardupilot SERIAL numbers, so UART7 is actually SERIAL1, so for weeks had been sending data on the wrong port and not realising…

So for anyone looking to try this in 2022, it works, and actually works really well now. If you only are receiving CRSF its naf, but connect another pair of channels and you get full on mavlink and live mission upload & GCS controll which is great.