Tempted by the Spark

I find myself thinking about adding a DJI Spark to my growing drone fleet (of one). My reasoning, though not fully formed yet, goes along these lines: I live in a ‘red-zone’ NFZ area (Class D so still,able to fly) where opportunities to fly a done are limited. The Mavic Pro, though beautifully formed and small, is still big enough to make its presence felt when it’s in the air, attracting attention and all that entails. The Spark is small, very small, looking to the untrained eye like a kid’s toy when in use, thus ideal for quick flights that won’t attract, hopefully, the attention of its larger sibling. Does that make any sense?

I know the Spark has a fraction of the Mavic’s features and a lower image resolution but I still think it could be a very handy little second drone.

What think you? Am I being seduced by cunning Chinese marketing ploys or is there a germ of sense in my plan?

Also tempted by the spark but resisted it so far, also in a class d area which makes flying harder.

Yes, tempted for even more portability and less noise.

I quite often edit the low res footage in either DJI GO or Quik so not sure I’ll be overly bothered by the quality drop.

Will see where we are come mid 2018. Heading to Canada and USA so might make a shrewd purchase out there.

Having had a Mavic for nearly a year now and a Spark for over 3 months now, would I buy the Spark again? Being honest, probably not. If the money isn’t any issue to you, then why not but in all other respects, I wouldn’t bother and may yet sell my Spark. The Mavic, well my Mavic, has just worked, done everything I’ve asked it to, it’s never done anything unexpected, the footage and images it captures are more than good enough quality for me and it’s very portable. I have total confidence in my Mavic.

The Spark is great too but it needs more input to get what you want out of it imo. The range issue has to be addressed in CE land, you can’t fly it on 5.8ghz and expect to get more than 100m without signal loss. None of this is major but it’s just a bit of a pain. It’s not that much quieter than the Mavic and there should be even less of a difference when the new Mavic props arrive. Sure it’s smaller and lighter but not so much that you would notice in a back pack. Video is poor compared to the Mavic obviously and while it’s got the same sensor as the Mavic, it seems to have a smaller dynamic range so sky and the sun mean a lot of the ground a lot of the time gets lost in darkness.

The saving grace, at the moment, for me are the pano shots. They are immense, from 3 shot to 9 shot to 21 shot images producing an image up to ~12,000 x 5,000 pixels or 80mb. That’s probably the only reason I’ll be keeping mine, well until or if DJI add large panos to the Mavic. Plus it is undoubtedly cute and it looks like a toy so easier for people to ignore.

Did you know that Maplins have the Spark combo on offer until tomorrow? Collection in store only but £100 off at £599… That might tempt you!

Good tip, thanks @Peter. Appreciate your comments re the Spark. The signal loss is a problem I’d not heard about. Is that with the phone and RC or just the phone?

@Peter, FYI, spoke to my local Maplins today and they knew nothing about any deals on the Spark Combo bundle, unless you meant it was discounted until yesterday (Sunday). Not quite sure what you meant.

However, the good news is that their Christmas prices kick in next week and will be applied to the Spark and, presumably, other DJI drones. No details yet. 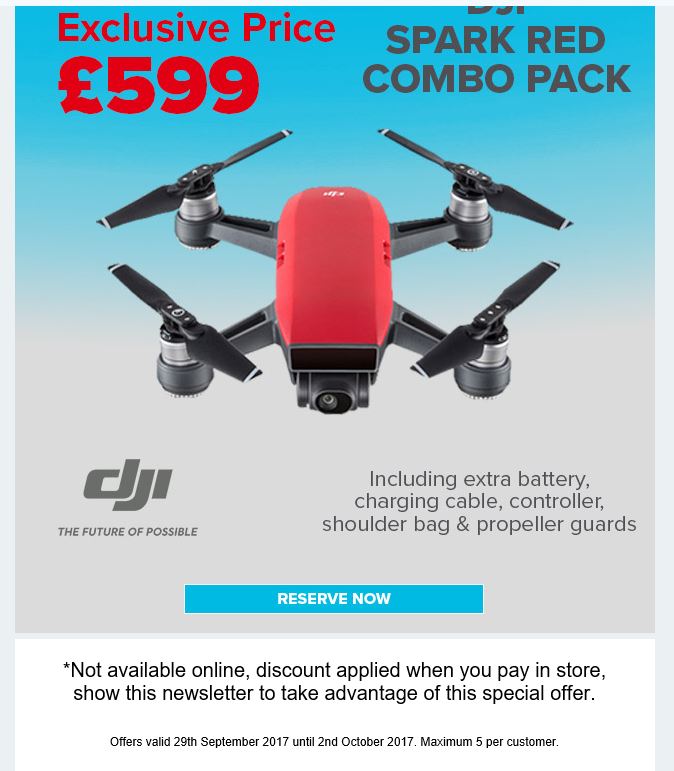 Don’t you love the optimism, “maximum 5 per customer”!

That harks back to the dark days of the Mavic when demand outstripped the supply a hundred fold. We bought and sold over a dozen Mavics during that period, most were from Maplins.

Thanks, I think I’ll pass on this one. Shame they didn’t know about it in my local store. Sounds like, if Maplins are cutting prices next week, others will be too, Could be some good deals to be had.

I forgot to mention that they knocked £200 off the Mavic too. That kind of makes me feel like end of life is looming and an evolution model may be forthcoming although I’ve not heard any rumours of such… 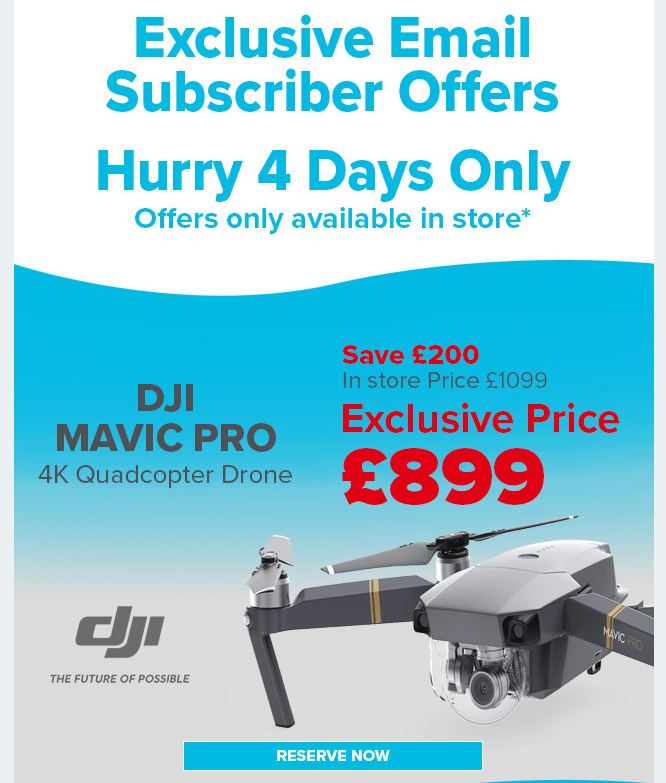 Spark acquired! Picked it up from Argos today. It’s so tiny! 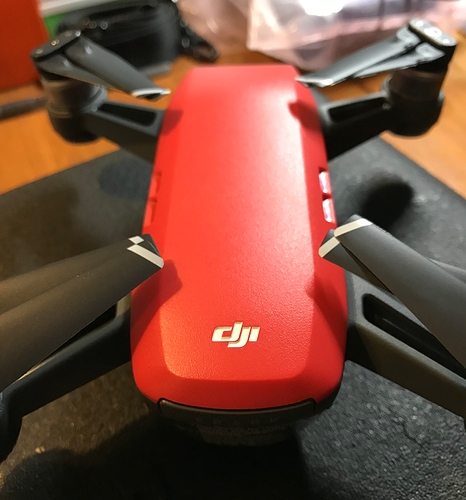 Nice colour, still thinking about one of these

Yeah, I figured it’d show up more clearly when I’m searching for it in the undergrowth.

Congrats on the new acquisition

Now you need to photograph one drone in the air, using the other

Now you need to photograph one drone in the air, using the other

Yeah, that’s going to be a juggling act to look forward too!