Tintern Abbey - Added to Places of Worship in Wales 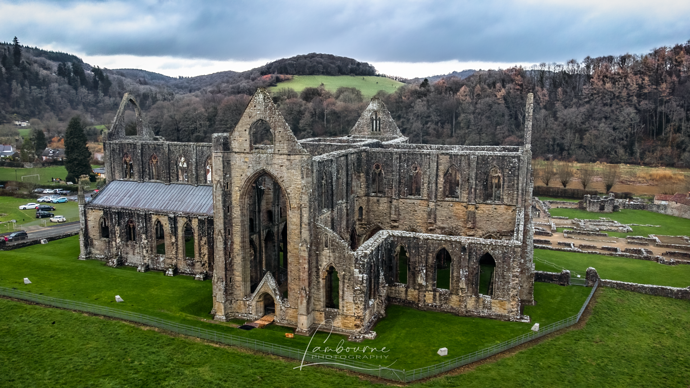 This location has been recommended to fly your drone in the Places of Worship category in the Wales region.

TOAL was from the bank of the Wye River, behind the Abbey's carpark.

Tintern Abbey is a national icon - still standing in roofless splendour on the banks of the River Wye nearly 500 years since its tragic fall from grace.

It was founded in 1131 by Cistercian monks, who were happy to make do with timber buildings at first. Abbot Henry, a reformed robber, was better known for his habit of crying at the altar than for his architectural ambitions.

A simple stone church and cloisters came later. But then, thanks to the patronage of wealthy Marcher lords, the white-robed monks began to think bigger.

In 1269 they began to build a new abbey church and didn’t stop until they’d created one of the masterpieces of British Gothic architecture. The great west front with its seven-lancet window and the soaring arches of the nave still take the breath away.

So grateful were the monks to their powerful patron Roger Bigod that they were still handing out alms on his behalf in 1535. But by then King Henry VIII’s English Reformation was well underway.

Only a year later Tintern surrendered in the first round of the dissolution of the monasteries - and the great abbey began slowly to turn into a majestic ruin. 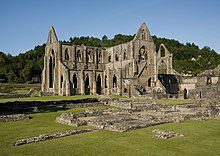 Tintern Abbey (Welsh: Abaty Tyndyrn pronunciation (help·info)) was founded on 9 May 1131 by Walter de Clare, Lord of Chepstow. It is situated adjacent to the village of Tintern in Monmouthshire, on the Welsh bank of the River Wye, which at this location forms the border between Monmouthshire in Wales and Gloucestershire in England. It was the first Cistercian foundation in Wales, and only the second in Britain (after Waverley Abbey). The abbey fell into ruin after the Dissolution of the Monast...