Currently assessing drones, photo capture apps and other software and how they can be incorporated into my surveying toolkit.

Have yet to try Open Drone Mapping as Im currently trialling Drone Deploy. Employing Pix4D Capture yesterday to fly a photo mission of a farmhouse using a Parrot Anafi drone to circle the property, the 36 photos were uploaded to Drone Deploy and a little while later it came back with this: 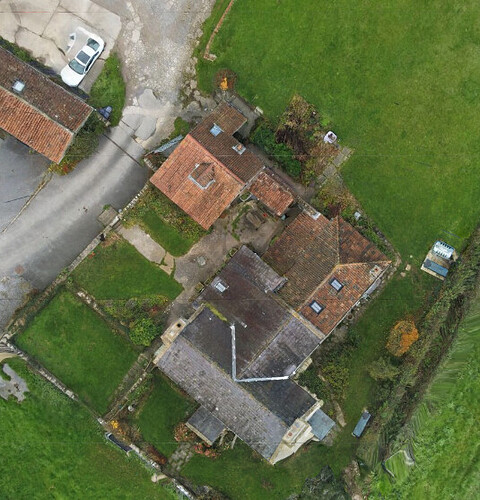 Converted via Drone Deploy to a 3D view it looks like this: 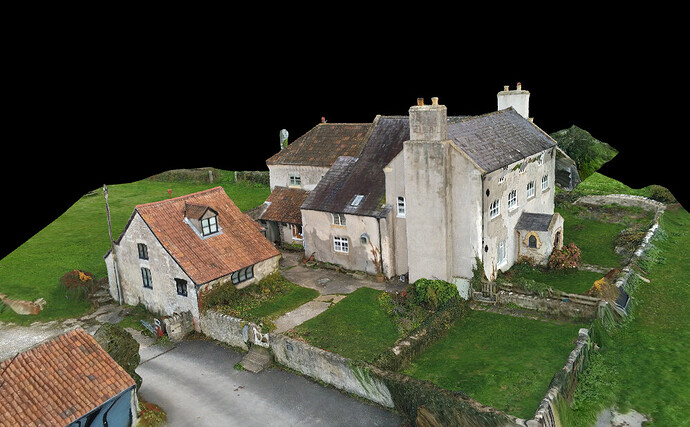 Note there are visualisation issues below the bottom of the roof with walls and windows bending outwards … anyone have any tips on how to correct this?

Drone Deploy has the ability to export LAS files so once downloaded to my laptop the LAS file was opened in 3D point cloud software: 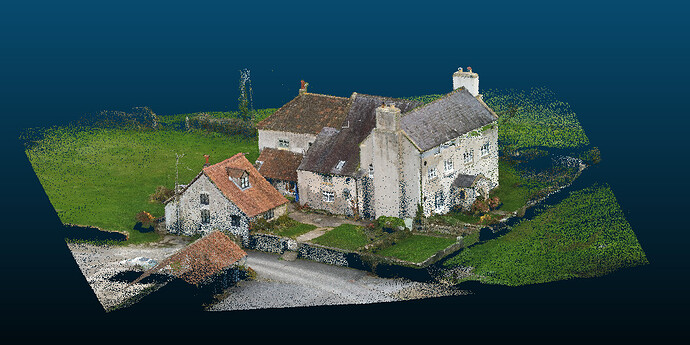 … and with some scalar field tweaks and also applying a shadow filter the point cloud was then converted into an elevation model: 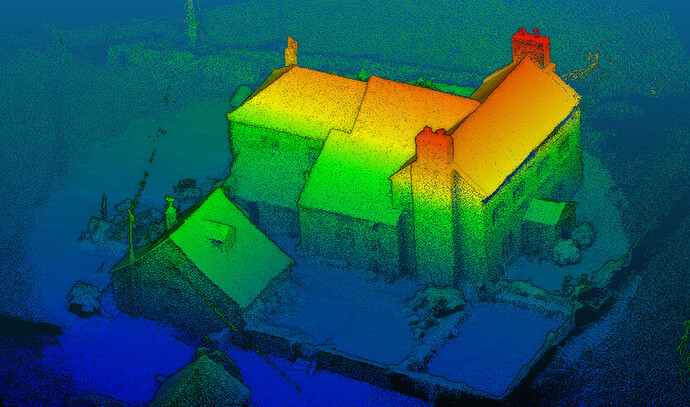 Note this is an experimental project and is still very much work in progress. So far Drone Deploy appears to work reasonably well and its able to export a variety of outputs including LAS point cloud files … can anyone confirm what digital outputs ODM exports? Definitely interested if ODM is able to export .las files … Im guessing @Longstride knows!

The warping of the roof will be due to not having any data in the overhangs, so you’d want shots from below looking upwards (the Mini 3 for example is great for this!) There’s not a fab way to correct this in post, you would have to manually shift the points.

You can see in your point cloud that there’s no data points in that region so it’s just interpolating between them for the 3d model.

OBJ for the 3d model
GEOTIFF/PNG/JPG/KMZ for the orthophoto
LAS/LAS/PLY/CSV for the point clouds.

ODM’s inbuilt point cloud viewer is pretty good as well; however, I still tend to use CloudCompare for working with the data afterwords.

@Bobbysmile thanks for the info, I couldnt initially find what outputs ODM offered however with a further search I came up trumps here: Drone & UAV Mapping Software | WebODM.

It did cross my mind I will need to fly the drone slightly lower and further back from the property in order to pick up data below the overhangs. Something I will look into and have to research further - if I went down the Mini3 route is there a way of flight planning so that those images looking upwards can be incorporated into the final model?

Sadly there’s no SDK for the Mini 3 at the moment, so you have to fly it manually. The images are still geo-tagged, and most software now supports more than one camera (at least I know Pix4D and ODM do) and you can just feed in the folder of images, it should be pulling the location data from the EXIF not from the flight plan itself.

If it’s just for overhangs, to be honest, I’ve taken photos with my phone before to fill the gaps (make sure geotagging is enabled!) as it’s not worth buying a whole other drone for and it works fine. Some SLR cameras will take GPS data as well to tag images, meaning you can use long lenses (my D7100 does for example) for far away bits.

very useful to know! many thanks! Im guessing that DJI intends for the Mavik series to be the go-to for surveyors rather than the Mini 3?

They’ve said with the new generation that Enterprise class drones will get the priority for the SDK (so not even the classic for example), they did originally say that they would then bring it to the standard drones as-and-when.

I’d like to make the argument that the Mini-3-PRO is in-effect the the most enterprise like drone in it’s weight class but I don’t for a second think DJI will brinkg out the SDK soon if at all as it’s been pushed back multiple times already.

ODM exports all sorts of files in a big package and I’m sure I’ve seen LAS files in there.

I used to load the models (normally the point cloud with textures into something like Meshlab on the Mac, and would then correct, edit, heal the point cloud a bit or scale it down to be smaller. I would then use Blender with the Blend4Web add-in module to export to a lovely 3D HTML page you can put online!

I imported the .las point cloud of the farmhouse into Cloud Compare - havent used Meshlab or Blender before so keen to trial them. I finally installed Open Drone Mapper over the weekend (I didnt dare install it from Github though haha!) and Im just about to upload some aerial photos from a measured building survey I carried out for a client, Im looking forward to seeing what outputs ODM can churn out