I’ve recently published a new video where I venture to Valley of Stones, at Fyfield Down, by West Woods, Marlborough, in Wiltshire. The down has the best assemblage of sarsen stones in England

, known as the Grey Wethers, because of their resemblance to an enormous flock of sheep in bedraggled fleeces

Fyfield Down is a large chalk grassland with a remarkable, nationally important geological feature: a river of sarsen stones deposited by glacial action. Sarsen stones are large boulders of hard silicified sandstone up to 3.5m across, and stones from this location were used in local Neolithic monuments including Stonehenge, 17 miles south, and the Avebury stone circle, 2 miles to the west.

Yet, what the books don’t mention … is that the valley was half flooded at the time

In July 2020, Dr Nash, Professor of Physical Geography at the University of Brighton’s School of Applied Sciences, published a paper detailing a comparison of sarsen stone geochemical data to 20 possible sites across southern England. This resulted in new evidence as to the real truth behind the sarsen stones’ origins. Link to the paper is shown in the video links section below.

Note, that this video focuses purely on the “Sarsen” stones and not the “Bluestones”, which are the smaller stones at Stonehenge. These came from the Preseli Hills in Pembrokeshire, south-west Wales (where I am from). Although they may not appear blue, they do have a bluish tinge when freshly broken or when wet. They weigh between 2 and 5 tons each.

I do hope you enjoy it 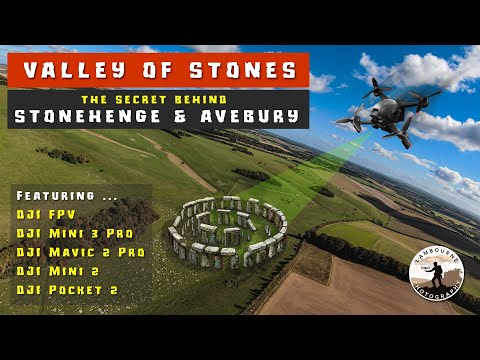 Thoroughly enjoyed that and superbly done as usual. Thank you.

Cheers Andy! Glad you liked it

Cheers John! A+? You are too kind!

An amazing film with commentary of facts - your flying was pleasing and the sound quite level.
Pleased you had the time to put it together.

Thanks Barrie, appreciated. I actually started this project back in April, but then had a 5 month break from everything. So it’s long overdue. But I am glad it’s finally done and that folk seem to like it. It is the start a few videos I have in the pipeline relating to Avebury

that was a great vid, and I loved the editing of it, what program did you use?
I also subscribed to your youtube channel

Cheers Bruce, thanks for watching and glad you enjoyed it

Thanks Aldric. I’m still trying to improve my edits, and get faster too, as currently each vid is taking a few days in editing alone. I use Adobe Premiere Pro. Thanks for the sub!

Strange I’ve never been taken there (that I remember), I was born in Marlborough and lived in Avebury as a small child. I’ve been taken everywhere else from Birthday parties at Silbury Hill and more stone circles than you can throw a stick at, I’ll have to ask Mother if she’s heard of it. Thanks for the prompt, very interesting!

It is inaccessible by road, only on foot, this is probably why it isn’t well known. That said, you or your Mother may know of Devil’s Den, which happens to be what I am working on now. It is located on the eastern entrance to the Valley of Stones. The valley can also be accessed from Avebury on foot via the Herepath.

I found an interesting podcast on the Valley of Stones and The Devil’s Den, recorded by Hidden Wiltshire.

Thanks, clinkadink, I’ll bend my ear around it when I get a chance! I suppose the main reason I’m not familiar with it is it sounds like a large effort when dragging children around etc. to a location without easy road access. Thanks for clearing that up.