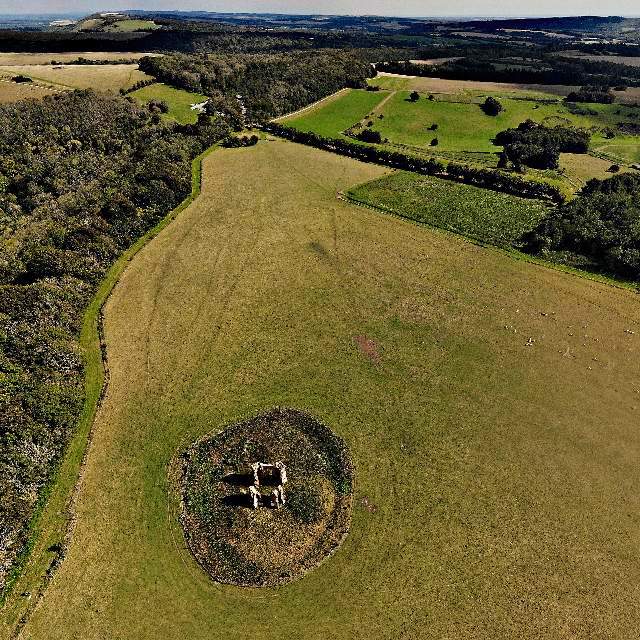 This location has been recommended to fly your drone in the Monuments category in the South East region.

The Vandalian Tower is a monument to failure. Vandalia was a colony planned to thrive in what is now Kentucky but politics prevented its survival. It is rumoured locally that Emma Hamilton would watch for the return of her lover Lord Nelson's fleet from the tower but there must be far better posirions to look out to Spithead and the Solent.

From South Harting head for Chichester on the B2141. Between 1905 and 1924 hill climbs were held regularly at South Harting, I think that this road may have been the one used.
Near the summit is a National Trust car park for Harting Down. There is a discreet noticed that I only saw when leaving saying that you can pay by phone or internet. I haven;t investigated further. Go into the car park as far as you can and go left down toward the road. Park and walk north toward the finger post showing the route of the South Downs Way. Walk left toward the road and cross carefully.

Good walking boots would be useful. You will be walking in an old wood with plenty of fallen branches, leaf mould and fallen whole trees. Stay on the path for around 110 metres and look for the trace of a pathway climbing up through the trees to the open space. It may be an idea to place a marker at the point you emerge from the trees as an easy way to find your way back.

Walk uphill on the mown strip with the fence to your left. There were sheep in the field when I went, dogs are best left at home. Pick a spot for TOAL and make sure the home is properly recorded at the start of the mission, you are operating fairly close to trees.

Uppark House and some of the land to the west of the tower is National Trust - the tower area is NOT!

The tower is a shadow of its former self and, although you can get low over and into it it's the views of the Hampshire and West Sussex countryside that makes this agood place to fly.

The originator declared that this location was not inside a Flight Restriction Zone at the time of being flown on 01/09/2020. It remains the responsibility of any pilot to check for any changes before flying at the same location.

Robert, thanks for adding to the DroneScene map.