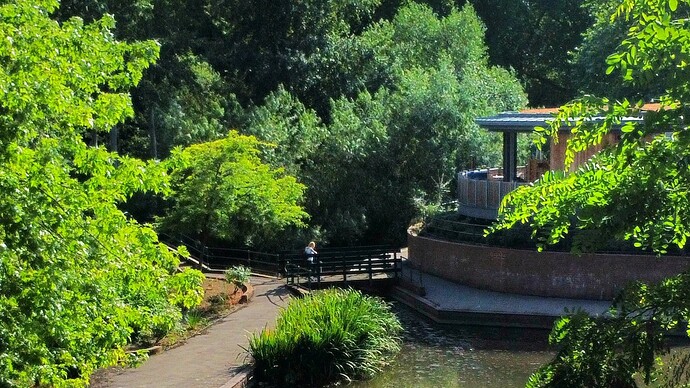 This location has been recommended to fly your drone in the Parks and Recreation category in the West Midlands region.

Victoria Park is a Green Flag award winning park located on the banks of the River Sow in the heart of Stafford Town Centre. Originally named the Victoria Park Pleasure Grounds the site opened in 1908 and is the Boroughs principal destination park. The park now covers an area of 4.95 acres and is the largest formal park in Stafford Borough. Following a £2.5 million Heritage Lottery funded refurbishment the park has gained a new café and training centre, alongside a restored bandstand, listed Mottram Shelter, toilets and enhanced landscaping. Albert’s Café, next to the Sow, in the heart of the park is open Monday to Sunday 8am – 4pm, has a grandstand view and serves delicious barista style coffee, tea and snacks. You can also buy food to feed the ducks and swans along the river. Those with children can happily spend a few hours at our destination play area, which combines elements of natural play and modern playground equipment. The site boasts a 7m high climbing net with a rope bridge to the 8m high tower which contains a slide at 5m, a small trampoline, splash pad – interactive water play area and a sand pit with sand diggers. For those who like a bit more of a challenge the park also has a concrete skate bowl which attracts many skilled individuals.

Victoria Park is located on Tenterbanks, Stafford, ST16 2QF. The nearest car parks are either Tenterbanks or Doxey Road (near Sainsburys) but you can park in any of the Town Centre car parks and follow the finger posts. I TOAL just outside the Park so as not to disturb those exiting over the bridge.

The originator declared that this location was not inside a Flight Restriction Zone at the time of being flown on 31/07/2022. It remains the responsibility of any pilot to check for any changes before flying at the same location.