Why I loath most drone manufacturers 😡

This is a ranty rant because I’m pissed off and I don’t see why everyone else should be having a good time.

Today I was sorting through my fleet and sadly one of my most unique drones will most likely never fly again.

There’s nothing wrong with the drone itself, in fact it’s in as new condition. The problem is the ridiculous need for a smart battery that is no longer available, and the one that was supplied has died fatally, including the not so “Smart” circuitry.

The drone in question is the Ceewa S1, which only three years ago was quite an advanced platform, having follow functions and advanced mission options, and capable of some silly speeds.

I can power it up with a regular LiPo but it complains that there’s no smart battery signal and refuses to arm.

For the time being I’ll just leave it in its custom carry case until my imagination comes up with a solution as all the electronics are quality Tarot (motors, ESC’s, flight controller) and the camera is well spec’d.

This is the drone in question: 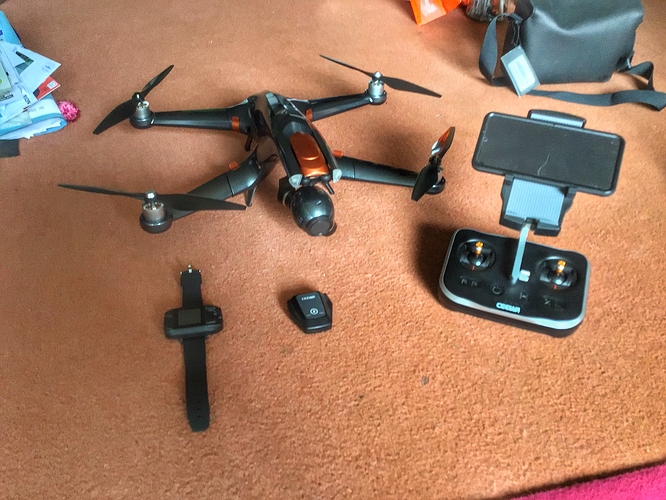 Can you not open the smart battery up and just replace the pouch cells?

… the one that was supplied has died fatally, including the not so “Smart” circuitry.

As @Pterodactyl, Terry, has noted this is a bit of a non-starter.

This is also a lesson in so much as even if you babysit your smart batteries they can fail catastrophically, and I was very lucky that it wasn’t worse. The original smart battery had swollen so badly it had cracked the plastic case and the circuit board, even though I had drained it down to a storage charge just a few months ago.

The more I hear of “smart battery” issues grounding drones the more I’m glad my Typhoon has “dumb” batteries.

Any chance of repairing said circuit?

The more I hear of “smart battery” issues grounding drones the more I’m glad my Typhoon has “dumb” batteries.

I’ve hooked a regular LiPo to the Smart circuit board and even though the level LED’s do react and I can get power to the Drone, no battery info; individual cell voltages, battery temp, number of charge cycles - is being sent to the drone and so it will not arm. This info is sampled by the smart circuit and sent to the drone as digital data via a two pin connector, similar to that of the Phantom 2 and up. It’s a shame there’s no standardisation of these things across manufacturers. On paper the circuit is nearly identical to that used in the Phantom 2 but the shape of the board, the case size, and contact locations, are very different, and most likely the data format will be different.

Like @SeaHunter, Dave, I like the Yuneec range as the batteries for the Q500 are still available from third party manufacturers, I can even use my regular 5500mAh LiPo’s with a simple 3D printed adaptor. In contrast my DJI Spark’s useful life, like all DJI drones, has had its lifespan artificially reduced as DJI no longer make the battery, and in the UK only Heliguy and Amazon (at a silly price) claim to have any stock. My Phantom 1’s will outlive my Spark even though their tech is nowhere near as advanced because the batteries will always be available from any RC store.

Since my last post above, seven days ago, I’ve been ruminating over the whole smart battery issues and the premature obsolescence that such devices ultimately render our drones as useless.

The Ceewa S1 I started this thread off with is not a great example. Even though it was released only two years ago, with a RRP of £1100, its demise was initially brought about by poor sales and lack of any support.

But what about the popular drones from DJI?

I feel that in the case of DJI they intentionally plan premature obsolescence into all their products as a sales tactic. You don’t so much as own a DJI product but rather lease it until such a time as DJI deem fit. This is done by restricting the availability of primary consumables i.e the smart battery. Once the battery is no longer available the drone is useless even though the internal electronics, motors, props, even the frame, are still in A1 condition.

Some of the earlier DJI drones are an exception to the rule, e.g. The Phantom 2 and 3, as batteries can still be sourced from 3rd party manufacturers.

But what of the Spark and the Mavic Air?

These two models are probably two of the most popular DJI released. Production of the Spark ceased one year before the release of the Mavic Mini, this means that what stock the dealers claim to have has been languishing on their shelves for at least 18months. It’s a similar situation with the Mavic Air as a few retailers are already showing batteries as out of stock. Both these drones are not exactly top flight models but when you factor in the cost of accessories (Filters, mounts, cases, etc) it adds up to a sizeable financial investment by the owner. I can compare this to similar tech, such as my Canon 300D I bought eighteen years ago. Yes I’ve upgraded to a more sophisticated camera but I can still use the 300D as the batteries are still available albeit from 3rd parties. DJI got very snotty when 3rd parties started producing batteries for the P2 by releasing firmware that prevented the batteries from being recognised. Thankfully this hostage situation was overcome.

So what of my future with drones?

I still have four drones that use Smart Batteries.

As you can see none of the above actually owe me anything.

However I can no longer, with good conscious, invest in a new drone platform knowing that my enjoyment would be forcibly time limited due to lack of essential, and proprietary, consumables. I’ll instead continue to get my jollies from self built models and probably go the Cine-Whoop route for photo/video stuff.

Rant over and I promise never to speak of this again.