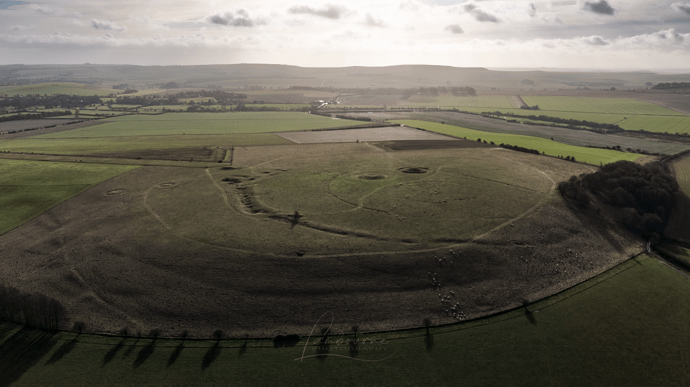 TOAL was from the end of track road, just outside the NT boundary. There is a wooden gate an information sign about Windmill Hill, which is the start of the NT site. I have added the pin at this location.

Windmill Hill is a classic example of a Neolithic 'causewayed enclosure', with three concentric but intermittent ditches. Original construction began in 3800 BC. Large quantities of animal bones found here indicate feasting, animal trading or rituals, or perhaps all three. It is part of the Avebury World Heritage Site.

Windmill Hill is a Neolithic causewayed enclosure in the English county of Wiltshire, part of the Avebury World Heritage Site, about 1 mile (2 km) northwest of Avebury. Enclosing an area of 21 acres (8.5 ha), it is the largest known causewayed enclosure in Britain. The site was first occupied around 3800 BC, although the only evidence is a series of pits apparently dug by an agrarian society using Hembury pottery.[citation needed] During a later phase, c. 3700 BC, three concentric segmented d...