Over two days I attended two totally contrasting DJI-sanctioned events bound by a common thread - nobody from DJI was at either.

Friday 27th April -
Discover Aerial Photography: A New Frame of Mind
‘Co-presented’ with Heliguy (i.e. organised by), the drone training, rental and sales company, this was held at a gothic pile (but nonetheless classy hotel) called The Elevetham in Hampshire. 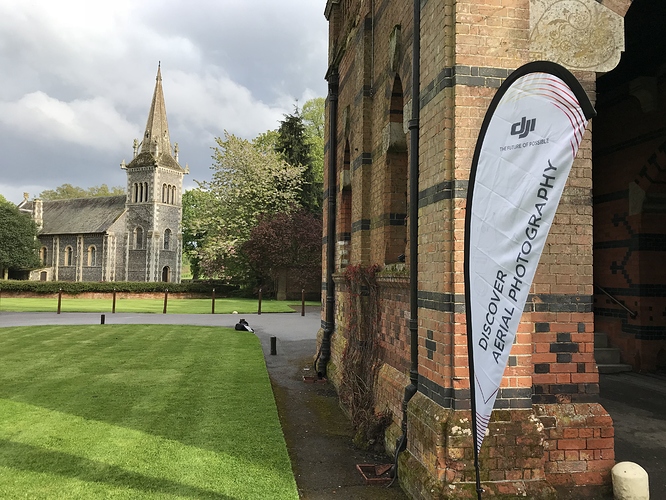 This standing-room only event was split into two parts concentrating on stills and videos with a guest speaker for each.
Jerome Courtial, an entertaining Frenchman, demonstrated some stunning images he had shot all over the world with many ending up in mainstream publications. His recipe for better aerial pictures: always shoot in RAW, set everything to auto and a bracket at least five exposures for each photo, among other things. 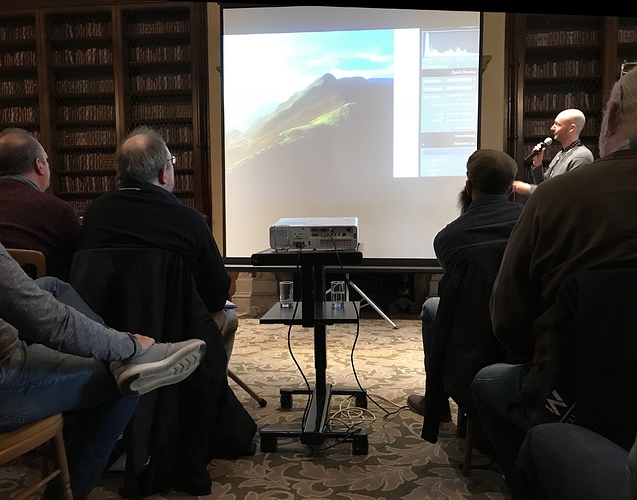 After a short but merciful break (the chairs were painfully uncomfortable) for tea, coffee and cake, the second half of the event began.

Oliver Astrologo, an Italian professional filmmaker, talked about how to take cinematic drone footage and how drones have changed the face of film making forever. He demonstrated his talk with some superb videos of Venice, Dubai, Lanzarote and Catalunya, made by using DJI Hexicopters and Phantoms. Most of his work involves a production crew of 2-6 people and lots of pre-planning and obtaining permissions from local authorities and governments. 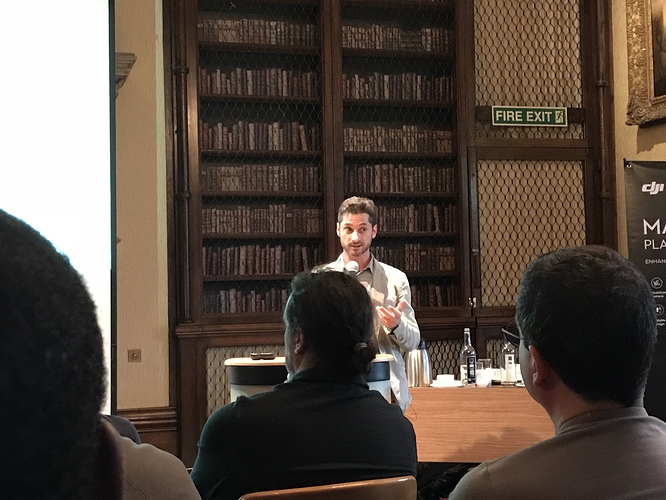 Sadly he had to rush the ending of his session (the event started half an hour late) leaving no time for a promised Q&A. The organisers wanted to take advantage of a break in the weather to allow attendees to fly some drones either outside or in the indoor cage they had set up.

Discover Aerial Photography was a fascinating event for anyone interested in drone photography but it was aimed very much at the professional and commercial drone users. I spoke to several people who either had their own drone company or worked for someone who did. Phantoms were definitely classed as the ‘drone of choice’ for photographers who wanted to shoot high-quality images and videos. The Mavic was mentioned but not very often.

Saturday 28th April -
DJI New Pilots Experience
This event, held at the Milton Keynes Holiday Inn, could not have been more different. Instead of standing-room only there was (at my session at least) row upon row of empty chairs, more than likely a result of the foul weather outside - intermittent rain, wind and cold temperatures.

Co-organisers Drones Direct had split the event into three identical sessions, each lasting around an hour and a half. You were assigned to one of them when you registered. They comprised of a brief introduction and overview of the DJI range followed by a practical flying session outside.

My session was hosted by Jim from the Drone Pilot Academy, who run courses at the hotel. He addressed an embarrassingly thin audience of less than 12 people (I was told later that each session was fully booked by 40 people) about the benefits of the DJI drone products with particular emphasis, I felt, on the Mavic Air which he made seem superior to the Mavic Pro in a number of ways. On tables in front of him where a selection of boxed and sealed Mavic Airs (which could be bought at the event) and, interestingly, a number of a boxed Ryze Tellos, which I assume could also be bought but we never mentioned in the presentation. 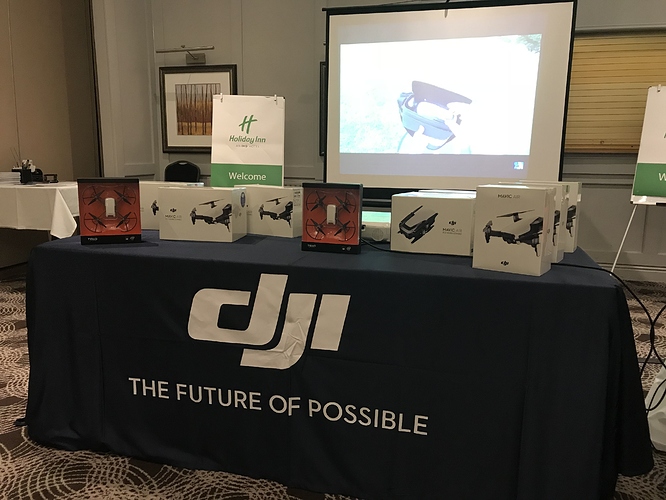 After the talk and lecture on drone safety (we had to sign disclaimers that said we wouldn’t sue if a drone crashed into us) we took a short walk in the wind and the rain to a pair of very muddy fields where we were allowed to play with drones for the next hour. I flew a Phantom 4 and a Mavic Air in the rain - and it was fun! 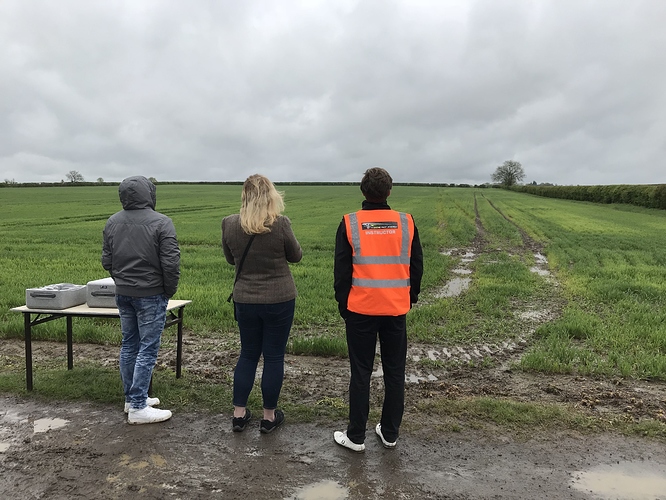 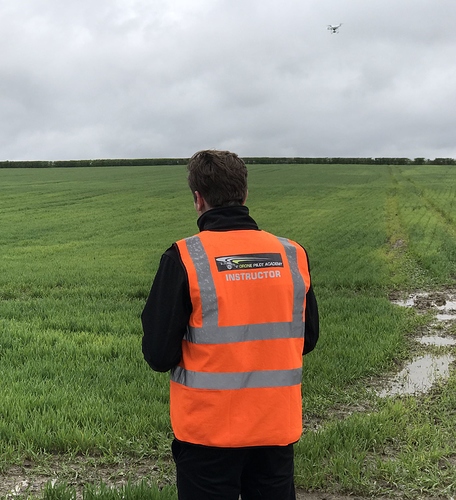 A trudge back through the mud and it was time for the next session to begin. My cue to leave, get home and dry out my waterlogged shoes.

Two very different events; one aimed more at the pro user, the other at the new user. It’s a shame DJI didn’t send people along to both as I spoke to a number of attendees who had questions for them. The representatives of the co-orginising companies just didn’t have all the answers.

So if you get a chance to go to a DJI sponsored event do so, but don’t expect to find the answers to all of your questions.

Well, it’s a shame there was no one from DJI present at either event, especially as these events were all over their own web sites

Sounds like Heliguy pulled out a few more stops than Drones Direct (which may have just been a sales lead event).

Great details and pics, and a good insight to anyone who may be wondering what’s involved in these events.

Thanks again for sharing

Sorry to hear that @sparkman999. I noticed that both events I attended only notified you 2-3 days before the event itself if your registration was successful or not. Not very helpful.

This went up on their site today: 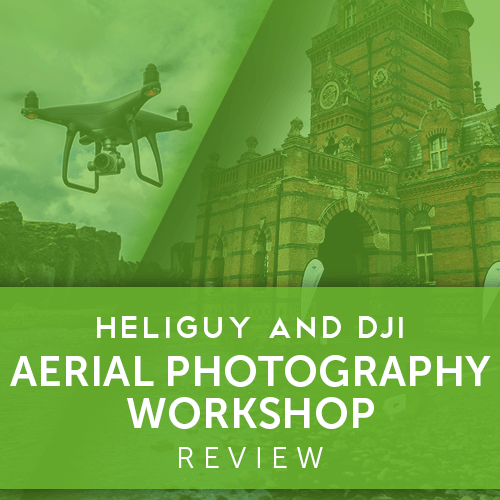 Heliguy and DJI put on an event based on aerial photography and videography with the DJI Mavic Pro and Phantom 4 Pro. Head to our post to find out more.