I’m a bit stuck for ideas.

I had a 3" Tyro 79 which was a lot of fun but also clearly put together on a very tight budget and it wasn’t long before I was replacing bits here and there. Eventually I broke the frame (crashed it into a goal post at full tilt) and moved all the parts over to a Diatone Roma L3 frame. A lovely little frame, but very delicate. One little tumble on some soft grass and I’ve managed to put a crack in it. Another issue is that one of the original Eachine Tyro motors has died (which caused the tumble and frame crack).

So… Now I have a bunch of parts that I’m not sure what to do with. Original Eachine FC and ESC board (a bit rubbish, but does the job), a Runcam Split, some no-name/TheFPV VTX from UMT which seems to do the job, 3 cheapo Eachine motors and a bunch of receivers (R-XSR, Radiomaster something, TBS Tracer).

I could order a replacement Eachine motor from BG for about £8 but I’m really tired of waiting forever for stuff to arrive. A full set of 4 Xing (or similar) motors from somewhere in the UK is likely to cost £50.

I quite fancy the idea of turning it into a cine/ducted quad of some kind. Ethix do the Cinerat frame for £30. iFlight do a couple of 2.5" cinewhoop frames for similar money. I ideally need something that will take two stacks front and back as my Runcam Split board and VTX are both 20x20 stack boards, so that’s 4 boards in total which won’t fit in most frames as a single stack.

Either way, that’s not really much change from £80. The original complete Tyro was only £60! And that’s the problem with the Tyro - you inevitably find yourself wanting to upgrade parts and struggle to justify spending almost the value of the entire quad again on a couple of add-ons.

So, what am I asking? Er, I dunno, just having a brain dump, really.

Anyone built a 3" cinewhoop that they like? Perhaps a wider, more philosophical question is ‘do I need a 3" quad?’. The Tyro 79 was fun but didn’t really do anything the Nazgul didn’t (apart from be <250g). I’m attracted to the idea of a cinewhoop for more stable, slow flying through trees and more proximity stuff, maybe following the RC car around, that sort of thing. Who knows.

I put my Tyro79 in a Cloud-149 ducted frame. It sounded and flew like a hoover so I had decided to wait a bit and get something with much shallower ducts. And following in that direction I was thinking of going digital but that’s also a bit of a waiting game at the moment. Yeah basically a 3" two stack frame that can be a platform for new parts as the others fail. Maybe something cut from a Dave_C design. Learned a great deal from this Tyro. 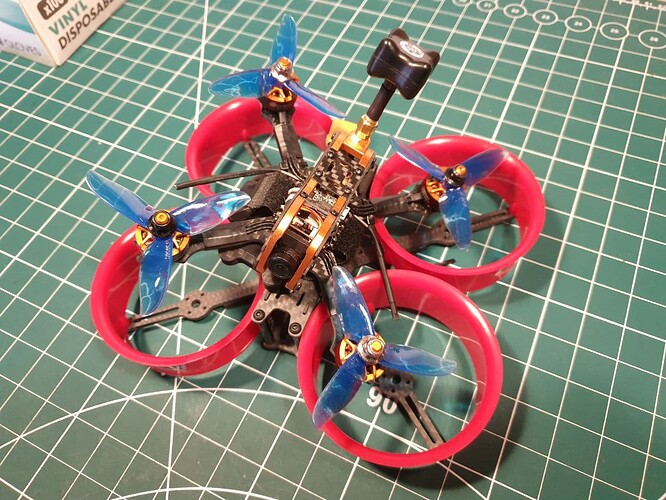