Since I started with DJI drones, I have been trying to improve the quality of 360 panos / tiny planets. I noticed that the drone using the lower res JPGs to generate the image, and leaving the high res DNGs.

I decided to try and make my own, and tried several applications, but all fell short. I have had no issues creating 180 panos or the Wide Angle panos manually, it is just the 360s.

I have tried Microsoft ICE, DJI Media Maker, Photoshop and Lightroom. PTGui is meant to be great, but so is the price, so haven’t tried that. Then I happened upon a post by @milkmanchris which recommended Autopano Giga. It is discontinued, but if you know where to look, you’ll find it.

Finally, an app that does it well. I can now use my DNGs for my 360s

… and what a difference in quality …

Auto-stitched by the drone using JPGs:

I think you are on windows, Mac for me and it is the best option, hands down.

I’m not sure if you know the history but Kolor (the developer) was bought out by GoPro and the tech was used in Qwik (which is shit).

If anyone is wanting a copy for Mac let me know and I can ‘share the wealth’, I’ve passed it on to quite a few folks here.

Any suggestions where? Does it work on a Mac?

Any suggestions where? Does it work on a Mac?

Autopano Giga. It is discontinued, but if you know where to look, you’ll find it.

For anyone else, it’s here

For anyone else, it’s here

Im sure that version asks for registration details or serial number

Yeah it does, searching for another, or do you have a link?

@clinkadink should be able to help you out, but the usual sources all have it

Anyone wanting a Mac version PM me

Wow, just had a little play with it, this is a pano I did the other night on manual settings

This is the DNG,s stitched with ICE

This is with Autopano

This is the DNG

Before uploading to Kuula, I fill the gap at the top in PS using Content-Aware. That way, you won’t get the blank circle above in Kuula.

Here is an example of the 2nd pano I did above.

It’s not perfect, but it does a very good job most of the time. 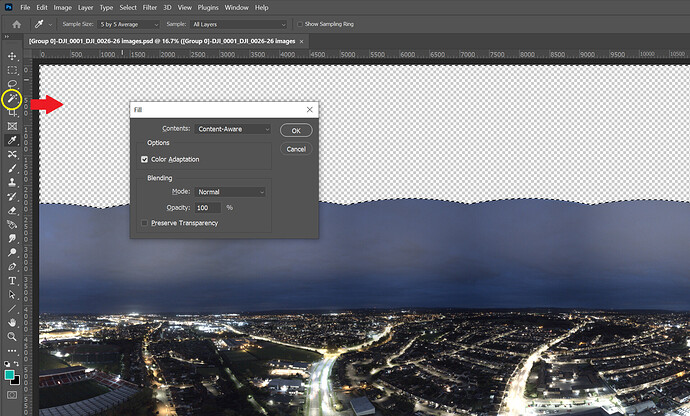 I think my mistake is Auto cropping when stitching the image

I don’t have the void at the top

for @clinkadink and @Sparkyws which drones are you using here?

So I have tended to always fly the Air 2 - which has its limitations especially over houses - unless I find a park in between.

@clinkadink what were your settings in the first one - up to now I have always used auto, which is probably fine during the day, but not so much at night.

which drones are you using here