There is a small man made loch just 15 minutes walk from my house, I have visited many times with a dslr but never managed to get anything worth editing or showing. The mini 2 however has opened up a whole new host of possibilities. 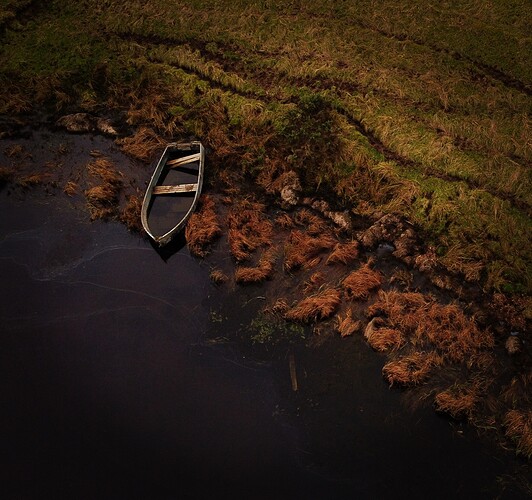 Thanks @jayel , the original is way off but I spent some time looking at different crops as I knew there was something in there. The square crop really adds to the image and places the boat perfectly for me

Hehe, the wee loch used to be stocked with both rainbow and native brown trout and leased or hired out. It ran quite happily for many years until we had an influx of Eastern Europeans that poached it to death and made it economically unviable. The Eastern Europeans came over to pick the fruit and veg in the farms that our natives were too lazy to pick. They were paid such shit wages that they couldn’t afford to buy decent food while they lived here in the summer months, our food prices are much higher than theirs back home, so they supplemented their meager rations with whatever they could find. In case anyone thinks I am being mean or even racist, trust me, I live on one of only 2 roads that go to this place, I’ve watched and observed over the 15 years I’ve lived here and seen it. I’ve even became friends with and still keep in touch with some of them. The problem was and is created by the super low wages paid to seasonal farm workers. And the fact we have unemployed people here that are unwilling to do a days honest work to support themselves and their families, while all the time we complain that "they steal our jobs "
Anyway, question answered and rant over