An interesting take on the law from Oxfordshire County Council

I sent them a message asking about their policy of banning drones going over their parks etc. I asked if this was a bylaw or something they they would just prefer, citing the law around airspace, the CAA and drone code. This was their response

IMO That is taking the p*ss.

As everyone knows by now (

) I am all for us flying within the law but if I wanted to fly in that area I would ignore that advice without any guilt. If councils want to ban drone flying then they should do it via statues that are current and with consideration of the drone flyers as well as the other sections of the public and with consideration of the existing regulations.

Of all their concerns… which part is not already adequately covered by the various drone regulations and the code?

Also, how many people, or children for that matter, have EVER been injured as a result of a drone accident in a park? Not sure those figures are available but I bet it isn’t many and I am 100% certain that it is a lot less than those injured by cycles being used on the footpath. I am nearly run over by a cycle travelling at speed on a footpath several times a year!

Paul have you gone all rogue on us ?

Not really. That made me quite angry tbh. When so many people are trying to do the right thing… register, get flyer ids or take A2CoC etc, follow the Drone Code (BTW… I know it is the majority that want to do it right!) and then councils like that want to use old, draconian bylaws (if that is what they are) to stop legitimate flying.

Disclaimer: I am not a lawyer… these are just my opinions.

I replied telling them Politely telling them think that bylaw in this case could very easily be contested as it only applies to what happens on the ground and not the airspace, which is governed by the CAA, informed them of the relevant aviation laws we must abide by for safety, and asked them to clarify that there are no specific bylaws that govern drones using the airspace above their land as other aviation do. Just to see if they can just say that legally I can fly there just no TOAL

mmm… strictly speaking, IMO, a UAV should only be called a vehicle if it is for the transportation of people or goods or similar. The Cambridge Dictionary gives the definition of a vehicle as

a machine, usually with wheels and an engine, used for transporting people or goods, especially on land

The bylaw also says ride or drive. Which in itself suggests the vehicle must be manned therefore for does not include unmanned or piloted. Again the joys of using old laws and trying to make the fit

I think that probably you could legally TOAL there tbh if there is no other byelaws to say you can’t.

You see, they assume too much…Definition of a ‘vehicle’ according to the Oxford English Dictionary … a thing used for transporting people or goods, especially on land, such as a car, lorry, or cart.

“the vehicle was sent skidding across the road”

Byelaws is byelaws though, they don’t control the skies

I can’t see anything in CAP722 that considers a drone a vehicle in spite of them being called UAVs.

I think that there would be a lot of wiggle room when trying to define a drone as a vehicle under that byelaw. It is clearly intended for manned vehicles. 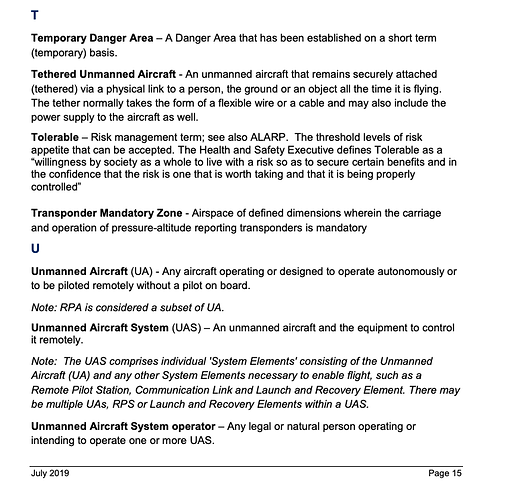 All dictionaries I’ve looked at specify a ‘vehicle’ is a mechanism for transporting people or goods.

All dictionaries I’ve looked at specify a ‘vehicle’ is a mechanism for transporting people or goods.

And what about UAV ?

Was about to make the same comment! See within a week or two he’s gone all rogue and rule breaker!

We such a bad influence

There is a mix of definitions. Most dictionaries require the machine to carry or convey people or things for it to qualify as a vehicle. However, there are lots of places that infer or imply that a UAV is also a vehicle. However, I think that in this particular case the wording of the byelaw strongly suggests that their reference to vehicles refers to manned vehicles.

OK… who is going to take one for the team to get this determined once and for all ?

Well… fundamentally my opinions have not changed but it is always good to try to see things from all points of view.

And what about UAV ?

Unmanned aerial vehicles were not around I guess in 1960 when these bylaws were introduced. But times change and its a thing. And the bylaws haven’t been updated cos they can’t be arsed.

Unless people keep asking for clarification…