And the issues continue - ESC?

OK, so the replacement FC is in the 5inch and beeper works. Everything seems to work really, other than when I throttle up? No props on, just a battery it’ll arm, but when I throttle up everything (inc VTX, etc) goes off. Unplug and replug and seems OK again. Obviously don’t wanna leave battery in long if it’s killing something (the old FC was fried somehow). Was going to make a video but out for a few hours now.

Any suggestions? Im sure before putting it all into the frame was OK, and seem to remember having similar issues before maybe.

I have conformal coated the ESC and FC (making sure to not go close to any connectors (FC and ESC 4/1 connected with a cable)). Not done much configuring of the FC yet.

Does the whole thing reboot itself when you throttle?

No don’t think so, just “dies”. Have a VRX on the phone watching the camera feed, and it just statics when throttle goes on, no beeps just dies (GPS light kept flashing). Idles fine when armed. Sure i tested all four motors individually up to max power briefly yesterday before my Buzzer issues. Maybe that’s it, individually OK, as a 4… I dunno. Frustrating…

How is the vtx powered? Strange it doesn’t reboot. Says to me the esc’s, or one of them is turning itself off to protect itself, or its damaged.

Vtx off of the 9v on the FC. Yeah know hard to diagnose and this is same ESC from where the FC over heated. Looks like another 40/50 then when no stock around too. Ergh

Will video it later, will help

Feel free to tell me to shut up, but, you’re not using a smoke stopper when you throttle up are you?

Haha funny you say that I did have the smoke stopper in when first happened. Thought DOH… Removed it and same issue so good thinking!

Right well watched a bardwell video whilst having a relax on the 4.3 and motors tab and yeah I hadn’t got the telemetry port enabled for the motors. Uart 6 on the ports (I got 8 UARTS, very nice!) I benched it up and got all 4 motors to 100%. When arming it’s not cutting out anymore but they’re getting VERY hot (desk with no props)… OK so that’s better than earlier!. Not getting hot when testing through the BF motors tab though, so I think we’re good now!

I also have the BMI270 gyro (shudda got the dual MCU6000 I think, but BMI was cheaper and was rush decision, ho hum), any ways, it states the following: 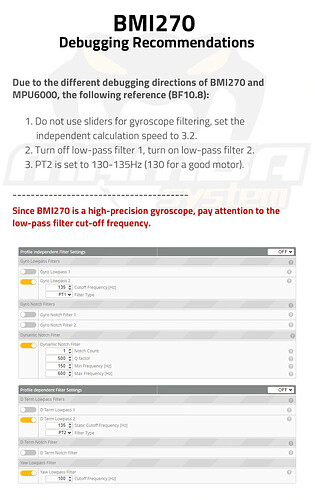 I’ve never really understood or used PID yet (one of the last things I need to learn and soon), and definately not seen the 4.3 PID/rates pages yet…

I CANNOT get these settings to stick at all. I change as they state, press save reboot, and they come back with Gyro lowpass 1 ON, and the 135/PT1 settings as follows: 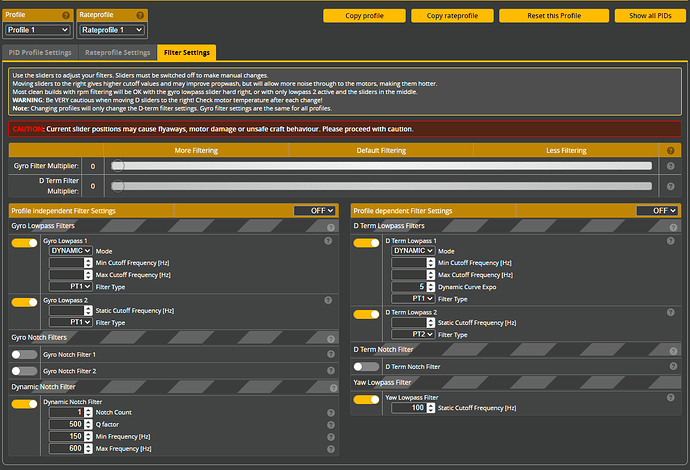 Also VERY concerned about that fly away warning… I thought the defaults out the box would be good. Don’t think ready to check this quad yet!

Also can I tell when release candidate I got? Just states 4.3.0 BTFL. There a CLI command?

To be fair, betaflight is getting more funny recently. 3.5.7 was rock solid

Hmmm yeah. Well not used that old a version. Have to use 4.3 for this FC and it’s an RC. Well have a read around. Just don’t get why the settings they recommend don’t stick

I remember seeing a public service announcement on a recent Bardwell/Blunty video about some H7 flight controllers having issues with Betaflight 4.3 but cant for the life of me remember what the issues were. Ill try to find the video

Around 8:30 and its to do with H7 fc having issues with Bidirectional Dshot and RPM filtering in BF 4.3 which could be causing your super hot motors 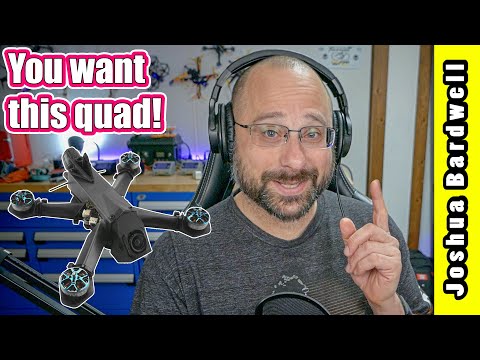 Ahhhh great. Will watch that and update to the latest RC I think then. Have a Google around. Not got time to play until Wednesday niw.

Cheers for the heads up. No wonder diatone put a big warning on! Would have got the f722 if they had stock at the time lol

To be fair, betaflight is getting more funny recently. 3.5.7 was rock solid

Also VERY concerned about that fly away warning… I thought the defaults out the box would be good. Don’t think ready to check this quad yet!

Yeah, don’t try flying it with props if the motors are getting hot - that suggests they’re spinning up and down all over the place and that’s going to cause all sorts of vibrations and problems once the thing leaves the ground.

There’s a thread here from a few months back with me trying to get my self-build 7" flying. The motors were getting really hot and it was getting into a flyaway situation above about 20% throttle., causing me to have to disarm it and let it drop out of the sky. Turned out to be a gyro filtering problem (I basically turned it off to solve the problem). It’s still not perfect and gets into some D-Term oscillations at very high throttle, but remains in control now. In the meantime I’ve learnt a lot about filtering!

Cheers. Diatone themselves stated that it’s a dev version of BF and to turn off filtering. Shame I can’t turn it off!! Have had a quick look through the BF release notes, and be good to see what version of RC I am using. Will continue to check things out tonight, but definately won’t be flying it any time soon. Motors weren’t hot on bench, just when armed. Will keep the props well away from it for now

Good advice from all here. The bardwell video actually specifically mentions the FC I bought.

so could be worth checking if yours has a 4.2.11 target and rollback as a temporary fix