So we have the INAV thread over here:

A thread to discuss anything INAV related … quads or wings whatever

Having spent the last few months going down the Ardupilot rabbit hole and loving the functionality in it, I figured we might as well have a place to discuss anything to do with Ardupilot as it’s quite a steep learning curve compared to some other FCS out there.

Much like INAV ardupilot is much more focused on GPS enabled drones, although it does support acro modes as well. The big selling points are autonomous mission planning, and very high levels of customisability and control with inbuilt support for large numbers of external devices.

It can be quite intimidating to jump into (my MambaF405 reports a whopping great 958 configurable parameters) but for anyone interested I’d recommend giving it a go, more and more boards are supporting it now.

My long range 7" quad is now running ardupilot, sadly it seems like MAVLINK over the TBS receivers is still a bit naff, so I can’t upload missions on the fly, starting to look at using a separate TX on the drone just for the telemetry.

It is continent though to have everything visible through the WiFi hotspot on the Micro TX, and using yaapu telemetry with CRSF on the receiver itself is working really well. 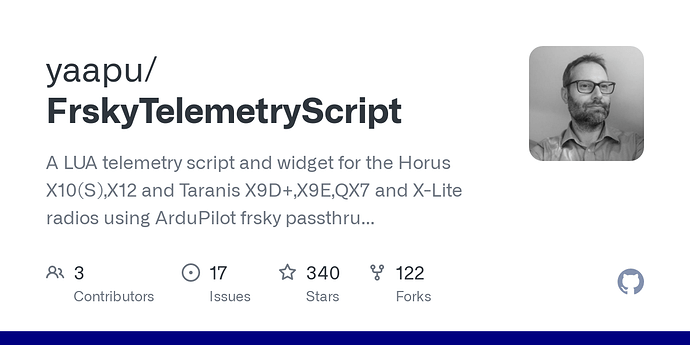 GitHub - yaapu/FrskyTelemetryScript: A LUA telemetry script and widget for...

I’ve been using Ardupilot for around 10yrs. My first install was on a fixed wing using an APM 8bit flight controller.

I still have that original plane (FPV Raptor), and I also installed an APM into a Quanum Venture. Other builds include a 500 size quad with a Pixhawk and the Skydroid long range system.

I have two 3DR Iris Plus quads that I’ve installed the Jumper R8 receivers into. These allow the Mavlink data to be sent directly to my TX16S running the Yaapu scripts without having to use a separate converter. Also four 3DR Solo’s that use the Cube Black FC.

Even the cheap and nasty Simtoo Dragonfly and Fairy Drones I have are running on Ardupilot.

Cut my teeth on ardupilot, it taught me so much about drones.

I’ve got two ArduPilot projects on my workbench at the moment, an 1100mm twin engined tailed plane and a 7" LR quad.

I’ve used Ardupilot a few times before, but with gaps of a few months so I have to refresh the brain cells with Mission Planner

I sometimes find I just have to blink and I forget what I’m doing.