Been running a new battery down because it wasn’t charging fully, it remained within .01 of every cell until I got down to 3.5v then some cells discharging faster 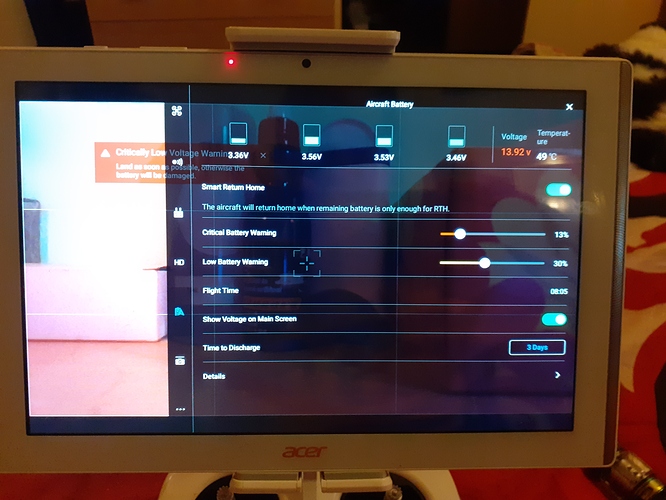 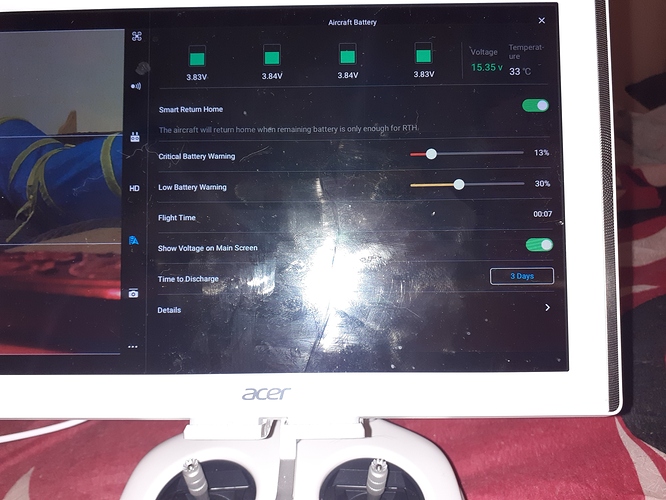 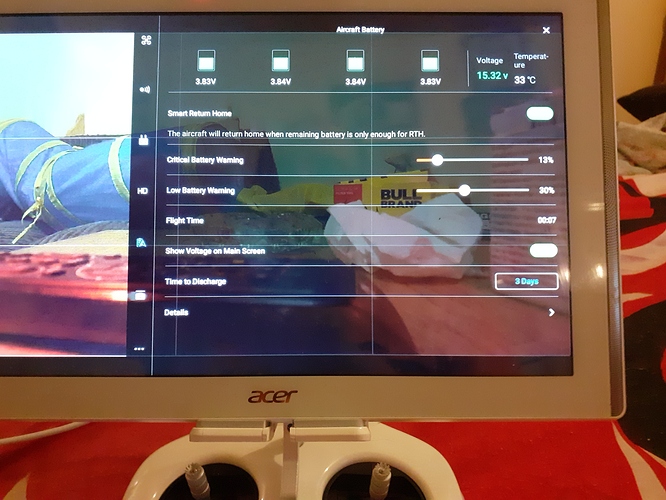 I’ve used one on my P4 for one flight, brand new and it still won’t fully charge and only lasts about 15 mins before alarms start going off and never took it further than 150 - 200 yds away either just in case , use it now just for updates or minor servicing or editing footage

I recently bought three 3rd party batteries for a Phantom2 that exhibited the same behaviour you describe. I discharged them all to around 3.4Volt/Cell, charged them back up to 100%, and now all three provide an average flight time of 25mins. It’s not the battery itself but the Battery Monitoring circuit inside the pack that is sending the wrong info to the Drone. Doing a deep discharge effectively recalibrates the circuit.

Thanks Nidge bud I’ll try that

@Nidge each cell down to about 3v ?

No! 3Volt/cell might be too low that the charger will not initiate a charge. Most hobby grade LiPo chargers if they see a voltage of 3.2Volt/cell or less will refuse to charge. The minimum I would go is around 3.5Volt/Cell, no lower than 3.4Volt/Cell in a no load situation.

@Matty1
Dave, those images show 3.8v which is good as that is the storage level, nothing to worry about

Also, the balance is good, within 0.01v of each other.
You have good packs there

I’ll sort that out shortly @Steviegeek bud, in the process of recharging again so will take some more pics fully charged if the said battery fully charges this time lol 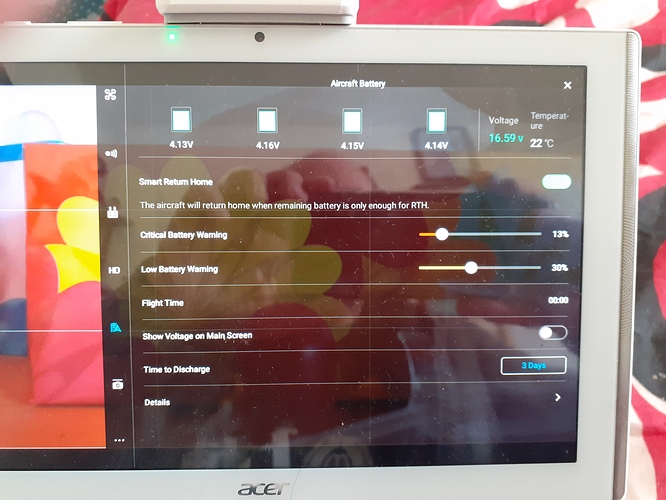 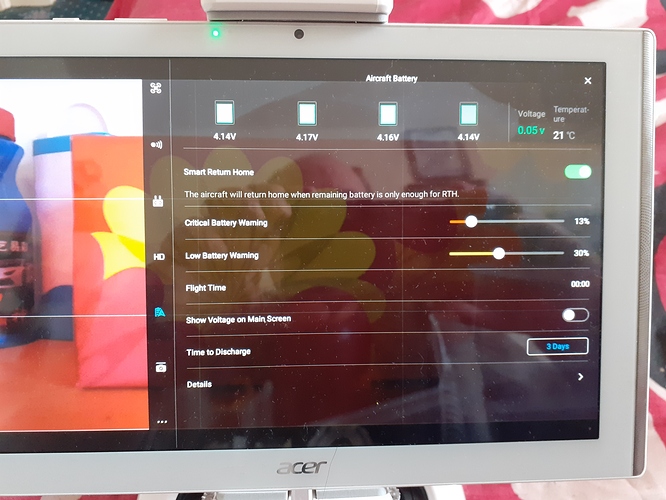 Bottom pic was 1st time after charging, took it out and rebooted and that’s top pic

Also knocked all batteries down to 3 days in the time to discharge, just something I read or watched somewhere lol

Moved all of this so that there’s just one thread about it and it had gone off-topic in the other thread.

I recently bought three 3rd party batteries for a Phantom2 that exhibited the same behaviour you describe. I discharged them all to around 3.4Volt/Cell, charged them back up to 100%, and now all three provide an average flight time of 25mins. It’s not the battery itself but the Battery Monitoring circuit inside the pack that is sending the wrong info to the Drone. Doing a deep discharge effectively recalibrates the circuit.

Let’s start with a bit of nostalgia.

Prior to the release of the Phantom 1 multirotors were solely the domain of experimental hobbyists. By their nature these hobbyists had an understanding of batteries and associated electronics as most were scratch built, using such materials as wooden frames and Arduino project boards.

DJI had for sometime been producing frame kits and purpose made electronics for the self builder but January 2013 they released the Phantom 1 ready to fly drone. Essentially this was a plastic monocoque body housing their existing range of electronics and was supplied with a generic 2200mAh 3cell 25C LiPo, terminated with the common XT60 connector and 4wire balance lead. This is where some of the problems started.

People with no prior experience of hobby flying and battery technology were buying the Phantom and treating it like any other consumer electrical item and getting unstuck very quickly. There were many tales of battery disasters as the users both drained the supplied battery to the point of death or overcharged it to the near point of causing death. Blade had similar issues when they released the 350QX, a Phantom competitor. This time the similar supplied battery was terminated with an EC-3 connector, as was and still is Horizon Hobbies preferred connector. The problem with this connector, even though keyed to only connect one way, would still allow the terminal pins to make contact when attempting to force a reversed connection. This resulted in the violent destruction of the Main Control Board.

With the introduction of the Phantom 2 range DJI implemented the use of the Smart Battery. This was just a regular low C rated LiPo but with a circuit that monitored the charge and discharge and the general health of the pack, taking out the guess work for those fully not up to speed. It was also a great excuse for DJI to ramp up the price. While the P2 was in production the price of the Smart Battery was around £120, where as the price of the LiPo used was only around £20 and the smart circuitry about another £10.

As I’ve previously shown in this thread the Smart (oxymoron) circuitry can get things wrong but it’s still very wise to follow DJI’s advice contained in the manual. DJI’s products are now established “Consumer” items and it is imperative for them to err on the side of caution.

Over discharging a LiPo battery increases the dendritic process (formation of lithium crystals on the anode) which will increase the cells internal resistance prohibiting it from charging and discharging correctly. The Smart tech is intended to prevent the user from doing this for obvious safety reasons. I was able to intentionally exceed these restrictions with my Phantom 2 batteries as I was able to monitor the terminal voltage, the individual cell voltages, the instantaneous current draw, and temperature of the pack during the discharge process and be instantly aware of any safety issues that were to arise.

99.99% of the time I would highly recommend that everyone follows the safety information contained in any electrical item manual, and if a battery appears to fail leave it at that and replace with a new one. Only investigate further if you feel you have the experience and knowledge to SAFELY investigate further.

No! 3Volt/cell might be too low that the charger will not initiate a charge.

your technical insights are of great value to me

I guess what I was trying to understand was why 3v

I guess retrospectively I should just have asked you that Q

Morning Nidge, can I bother you with a question about batteries???

In case you say yes(!) I’ll continue… Yesterday flying my Inspire 2 in windy conditions I switched to atti mode for practice. Aside from the questionable idea to do this with the batteries at 30% I had the notification, “Propulsion output has been limited to ensure battery health” deviation 0.004v. I then had, “Not Enough Force/ESC Error” while battling to get the drone back (flying into the wind) - deviation 0.007v

While flying I have noticed on the display when looking at the battery cells, some occasionally turn from green to yellow and the Airdata tells me that DJI’s smart batteries tell it that the batteries are still, after 76 and 80 cycles, still at 100% battery life.

From what I have said, I would be really grateful for your opinion about the batteries and whether I should perhaps replace them. Many thanks in advance!!!