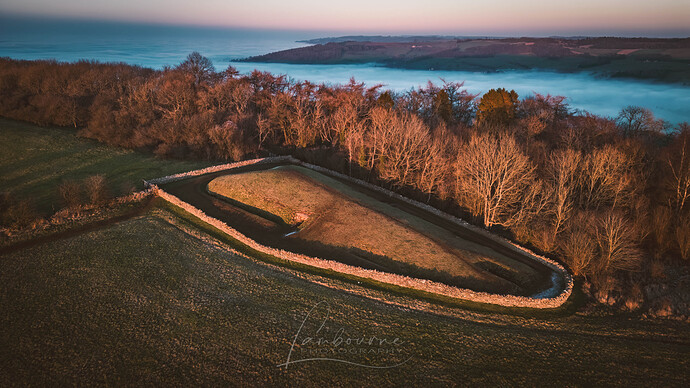 I parked on the on the road 300m to the east of Belas Knap, as instructed by Google Maps. What it didn't mention is that I had to travel on foot through a dense, frozen forest and up a 200m hill. Afterwards, I found out there is a dedicated car park for Belas Knap 750m to the north.

Belas Knap is a Neolithic long barrow or burial mound (about 2 miles south of Winchcombe), and which was built more than 5,500 years ago.

As is sometimes found at ancient burial sites, Belas Knap features a large false entrance and two hidden side-entrances that actually lead into the burial chambers. This may have been to deter grave-robbers or to serve as a ‘spirit door’, through which the souls of the deceased may walk and receive the offerings left by their descendants during ceremonies.

At some point in Belas Knap’s lifetime however, its side doors were blocked up preventing its further use as a burial site. They were reopened however when site was excavated between 1863 and 1865, with the remains of 31 people found inside. Four different burial chambers were unearthed, as well as a collection of skeletons from children and one young adult beneath the false entrance. A circle of flat stones was also discovered in the centre of the mound, along with animal bones and flint artefacts.

The people buried here likely lived a life of hunting, cattle-herding and small scale farming, while two skeletons who died from severe head wounds suggest raiding and conflict may have been common in the period.

Today Belas Knap Long Barrow is managed by English Heritage and has been restored to its original condition, presenting a fascinating look into ancient life in Britain. Once a clearly significant burial site, it is 54 m long, 18 m wide and over 4m high, with the false entrance and side chambers still visible today.

The atmospheric chamber tombs inside the mound now remain open, allowing visitors to enter inside and see them up close. To get a further idea of the site’s significance, information boards give its intriguing history as well as a diagram of the various chambers inside. 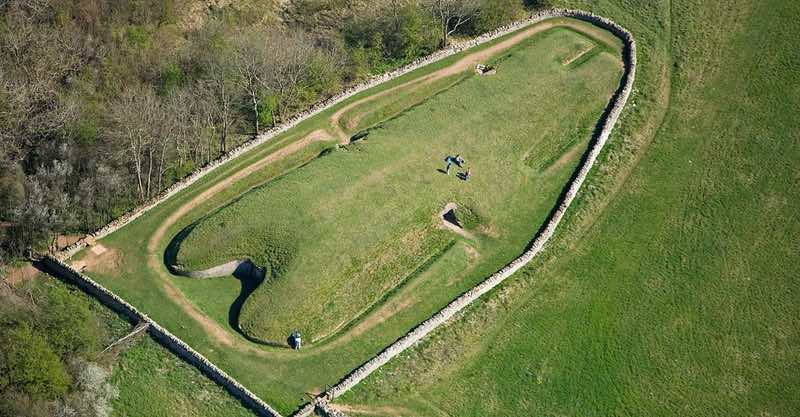 Belas Knap is a Neolithic long barrow or burial mound (about 2 miles south of Winchcombe), and which was  probably built about 5000 years ago.

The originator declared that this location was not inside a Flight Restriction Zone at the time of being flown on 21/01/2023. It remains the responsibility of any pilot to check for any changes before flying at the same location.