Conditions were a light wind ( UAV Forecast reckoned about 13mph ) blowing from the East, so the speed runs were done from E to W. Not sure if just oldish batteries, or because it’s the first time they’ve been fully charged this year, but had pretty bad voltage sag ( down to 13V ) and they didn’t last very long at all - but they are just 0.450mah

Pic of the drone 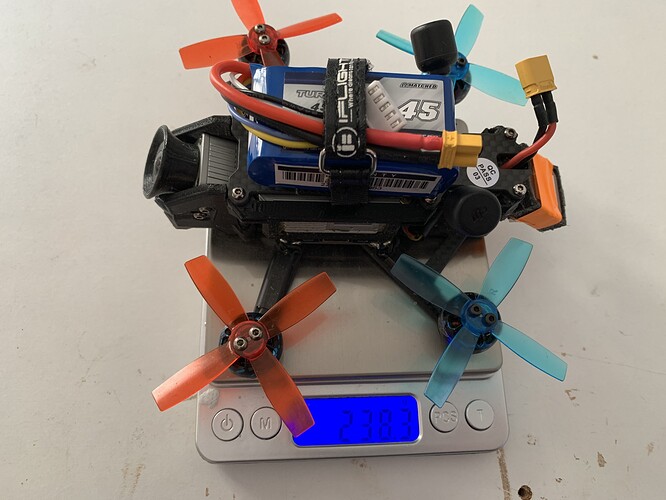 Screenshot of gpx data dragged and dropped into Google Earth

Screenshot of the relevant .csv data

If anyone wishes to verify the data, the original Blackbox logfile is available at http://martins-models.co.uk/martin/BTFL_BLACKBOX_LOG_Titan_DC2_20220301_161317.BBL . The fastest run was on flight #2.

Interestingly, with a logging frequency of 500kHz the total of approx 8 minutes of flight today took up 6MB of Blackbox memory - handy as the FC in the DC2 only has 8MB available

… that the drone actually returned. For that reason, your entry is disqualified 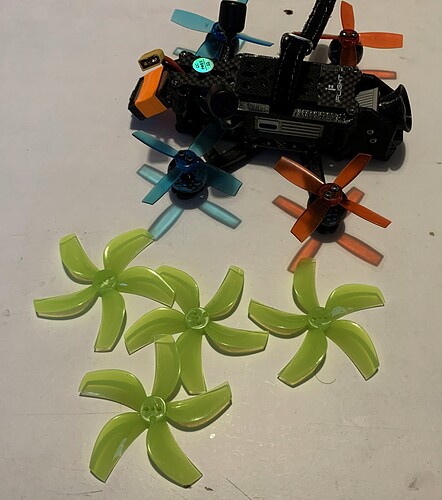 Is the iFlight Titan a BNF type drone that warrants its own slot on the leaderboard? Much like Jez @Earwig 's baby croc was?

I bought it in BNF form ( it was my first FPV ) though it is available in kit form, so the distinction between BNF and self-build could get a bit blurred here

Is there only one entry allowed on the leaderboard for self build ? If so it seems a tad unfair to be have a 2" 4S drone up against a 6S 7" or larger…

One for the “high street” drones (the DJIs, Autels, Yuneecs, etc, of the world) and one for the FPV’ers.

I think the time for that split is fast approaching us

Perhaps, to avoid the board filling up with a plethora of various FPVs, a single entry per frame size and battery size ? My DC2 would then fall into the 2" 4S category, while my Evoque would drop into 5" 6S IYSWIM

That would be so hard to control tho. So maybe the two categories should be
High Street Vs Custom/BNF/PNP etc FPV
Then custom FPV broken down into
2S
3S
4S
6S?
not too many will have GPS tho to record speed.

not too many will have GPS tho to record speed

That’s OK - an audio recorder will prove when Mach1 is reached.

I agree to splitting this up. But in the fpv category, no models. Just name and speed? Maybe split into 2. Wing and quad.

Why no models ? There’s a big difference between the capabilities of a 2" quad and a 7" one, so the model would be needed to differentiate

Would my bespoke self build, home made FC drone be allowed now?

Seeing as i am new to all this, might as well have a go! Make and Model! Home-brew Speed 52.82 MPH Going to do some tweaking!

I think forget about frame models or bnf/pnp/custom.
Spit into prop size and battery size. Doesnt mater if its bnf or custom build everyone is on an even footing

Ummmmm yeah - that’s what I meant - you don’t hear the sonic boom onboard - or there would have been a shit load of high profile Concorde passengers suing for loss of hearing.

Splitting to battery size would expand things a little too much? Dunno. A thread needs testing.

If we we’re going for a separate ranking from high-street/gps/camera drones, and going by prop/frame size only, then there’d be few entries as there just aren’t that many distinct sizes in common use ( 7 ? ) so splitting into 4S/6S ( and 5S if anyone wants that too ) would give more people a shot at it I think

I agree and also each prop size would only be relevant to certain battery sizes anyway if that makes sense? Lol